This Band Walks Into a Bar …

So, two fat guys, a Mexican and a Japanese girl start a band…

“I think the three of the guys in the band are pretty immature and Lys is mature,” lead singer and guitarist Cory Wiegert jokes.

All jokes aside, if you’ve been around the Sacramento music scene long enough you know that bands are not just bands—they’re bands, within bands, within bands…well, you get it. A guitarist may moonlight in another band as its bassist, or a drummer may trade in his sticks for a guitar strap—Multi-instrumentalists are commonplace in this town.

Such is the case for the members of Dead Dads: its frontman, Wiegert, also plays guitar and sings backup vocals in the local bluesy rock band the Peace Killers, while Lys Mayo on the drums, guitarist Tony Silva and bassist Joe McKinney, also known as Joe Friday (yes, inspired by the character on the TV show Dragnet) also lend their skills to other musical outfits around Sacramento.

While the band also describes its brand of musical stylings on its Facebook page as “stoner pop-punk,” Dead Dads’ music is a fun romp in the world of pop-punk—you know, the cousin to punk, a fusion of fast punk beats and blaring guitar riffs with pop-y melodies and arrangements.

“When we first started, we didn’t want to just call ourselves pop-punk because we were mixing all of these kind of weird riffs and such, and so we started saying stoner pop-punk,” Silva explains. “I think it is a good way to describe us—I mean really we’re a pop-punk band. We take a lot of influence from the Bay Area pop-punk bands.”

The quartet began simply as a band of friends—going to shows and hanging out around the Sacramento music scene. What started off as something fun to occupy their time quickly grew into a full-fledged band.

“Our first show was in November 2011, and we had our first practice, probably, late September/early October 2011,” Silva explains.

“Our first show was for one of Danny Secretion’s cancer benefit shows,” McKinney explains. “And it was at this venue that was also an art gallery in Midtown—which I guess wasn’t a totally legit venue, it didn’t have the proper permits or anything. The name of the venue was a venue called, Digitalis, the show was going well and we were probably the fourth out of five bands [on the bill] and right as we were finishing up our last song the people at the venue working there came and said, ‘Hey, you guys got to stop…cops!’”

While the police may have busted up the renegade show, the band forged on and their efforts transformed from just playing music and having fun into a serious musical endeavor—ultimately materializing into their first EP, simply titled Ben.

“Once we did our first recording it started to get a bit more serious,” Wiegert explains. “It really was just to play local shows as first; we hoped we could do more than that. We’re just now starting to venture out of town, but there wasn’t a particular goal in mind. We found a small label to put out our album and I guess that was somewhat of a goal.”

Huddled around a cell phone in the back of Wiegert’s dark blue Dodge Caravan in the parking lot of their practice space (House of Hits Recording Studios in Del Paso Heights, near the Marconi-Arden Arcade light rail station and next to the 7-Up factory), the quartet spoke to Submerge about their early influences, the driving force behind their sound, the dynamics of the band’s creative process and their latest album Space Camp.

“I was a band geek starting in fourth grade, I played trumpet and all that stuff and then I heard Green Day and saw [the movie] School of Rock and I decided I wanted to play drums, and that was that,” Mayo says.

“Not many of the people my age like the music I like, and the specific music I had in my head that I wanted to play, which was some sort of pop-punk that was reminiscent of the old Bay Area pop-punk bands,” Wiegert, the elder statesman of the band, explains. “And we all smoke a lot of pot and get weird, so it just really worked out that way.”

And while you typically don’t see many females in town wailing away behind the drum kit, Mayo is quick to dismiss the idea that being a woman in a band with three dudes is anything remarkable.

“I don’t think it’s any different than having a group of four guys or anything like that,” Mayo says, elaborating on the guy-girl dynamic in the band. “They’re just my three best friends, so we inspire each other, we drive each other nuts, we write good music, we write some bad music, it’s not that much different than [any other band out there] … I’m in a band with girls as well, [and] to me I don’t think gender plays a huge role in the dynamic.”

The band’s second EP, released earlier this year, was recorded by a mainstay in the local music scene—Patrick Hills, who is also a musician in the punk band Bastards of Young. However, it wasn’t something that the group banged out in a couple of weeks—quite the contrary, whenever the band and Hills had any free time they chipped away at bringing the 10-song record to life.

“We started recording it, I think, at the end of the 2013 and we didn’t actually finish recording ’til probably around the summer of 2014,” Wiegert explains. “And then it took a long time for us to find somebody to put it out and everything. But we recorded it with a guy named Pat Hills at his place called Earth Tone studio in Rocklin. It was a long process; finally just in the last few months we were able to put it out.”

And yes, for all of you movie buffs out there, the inspiration for the album’s title did, in part, come from the teen flick Space Camp as well as a bit of mix-up with the lyrics during the recording process.

“What happened was, we were listening to Cory record his vocals for one song and one of the lines I thought he [sang that] he was going to space camp, and I just kept singing it over and over again and then yeah [it just stuck],” McKinney explains.

“Also, I missed seeing movies where people went to space camp. It is a total ’80s/early ’90s thing,” Wiegert continues. “When I was a kid I always thought it sounded so cool.”

The artwork for the cover, a collection of ethereal jellyfish on a black and gray space-like background, was brought to life by a friend whose artistic vision spoke to the foursome.

“We had a few different ideas…but a friend of ours Jessica Vosburg drew up the cover and then I colored it just using Photoshop and such—she did a sketch of it in black and white and we colorized it,” Wiegert explains.

“She drew that probably early 2014—it was probably one of the first album cover ideas we had and we tried about 30 other things and that was the one we always came back to, so two years later we liked it and chose it,” Mayo continues.

So, a jellyfish walks into space camp…OK, bad joke, but check out Dead Dads at their upcoming show and get weird!

For more info, checkout Deaddads.bandcamp.com or their Facebook page. 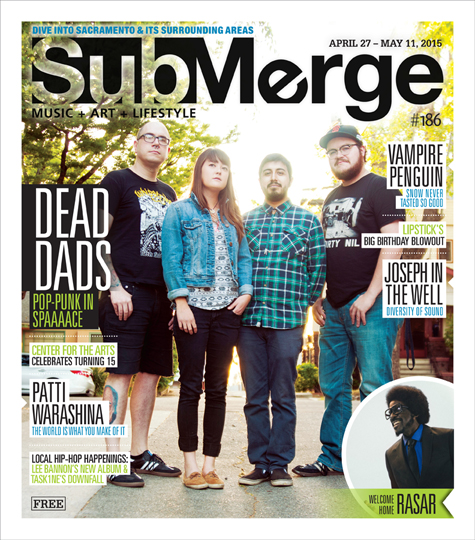