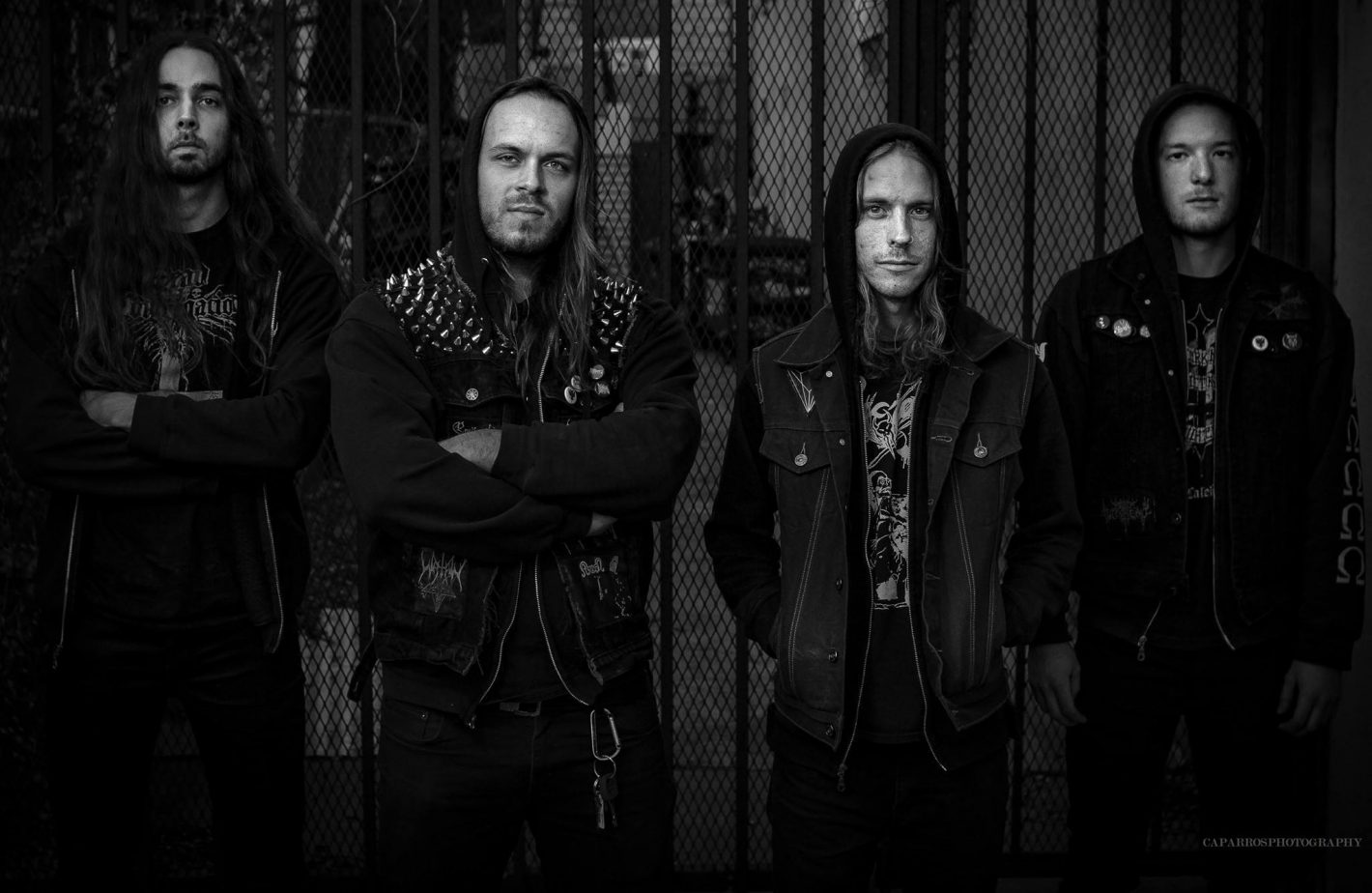 Purposefully ugly art is nothing new. It’s usually meant to weed out the people who can’t look beyond the unattractive aesthetic to find the deeper meaning and beauty in what’s presented. Dearth, a new blackened death metal band from Oakland that has some roots closer to Sacramento, has taken this idea as their mission statement.

Dearth came about following the breakup of the more traditional black metal outfit Torture Chamber, which three of the four members of Dearth were part of. Allen and Dearth bassist Zack Gilliam wanted a change in the music they were playing.

“There are parts of Dearth songs where we never repeat riffs at all; we’ll play a riff once and that’s it,” said Allen. “Which is very atypical for this type of music.”

Allen notes that bands that tend to lean toward black and death metal tend to keep a more repeated, rhythmical structure when writing songs. But anything goes when it comes to Dearth songs. Allen and Gilliam took an approach to song structure and chord choice that Allen describes as “awkward” and a “nails on the chalkboard” sound. Allen says that while this may be hard to listen to for some, it’s the exact sound that he and his band want with their music.

These descriptors make it sound as if a Dearth track is recorded anarchy, but the band’s first demos are a study in controlled chaos.

Of Martyrdom and Polluted Faith, which features only Allen and Gilliam, takes to the songs like a science. Those “awkward” chords and “ugly” are put together in such a way that ends up becoming brutal harmony. Guitarist Damien Thorn, who was also a member of Torture Chamber, joined soon after Martyrdom was released. Same goes for drummer Justin Divver, who is also a member of Oakland’s Funeral Chant and who mixed the album.

“We’re going for a very dissonant and ugly sound,” said Allen, “something that’s not necessarily difficult to listen to, but definitely makes the hairs on the back of your neck stand up.”

Dearth’s subject matter is another part of their sound that some may consider atypical. The usual black metal fare will often have songs about overt Satanism and fantastical gore. Allen says that isn’t as frightening as certain parts of reality.

“I try to stay away from the black and death metal clichés,” said Allen. “I think with this band we tried to be more rooted in reality. Our lyrics have a lot to do with religious fervor, people who follow demagoguery, people who are so obsessed with materialism that it becomes a prison for them. I think it’s even more frightening that these actually do exist.”

The band was almost simply called Drought, but once the guys found out that there was a band from New Mexico with that same name, they took it in another direction but kept it in the same vein.

“Dearth literally means the lack of something, drought, famine,” said Allen. “It could also mean the lack of warmth. The lack of anything nice, which we felt was a good band name.”

No matter the genre, being able to vibe with your band members is key. Thanks to three quarters of the band having been involved in other projects together before, and the Bay Area metal community being tight-knit, Dearth isn’t lacking in chemistry.

That previous experience has come in handy since the quartet only just played their first show in December at Independent Brewing Co. in Oakland.

Allen said that there were some minor hiccups, but the band was able to easily move forward with the rest of their set.

Martyrdom and Dearth’s first live performance have been well-received and the band has a fanbase that is growing. The release isn’t only getting attention from fans; it will soon be available on cassette from Oakland’s Transylvanian Tapes label.

However, that isn’t necessarily the goal for the guys in Dearth. Playing any type of “extreme” music comes about because the musician has a real desire to play this type of music. Whether it be the message, the community or the sound, every metal musician has his or her reason for getting into this subgenre.

“I like playing blackened death metal because, for me, it’s challenging to play,” said Allen. “A challenge is always interesting. You know, you like what you like. I really like heavy music. It’s just raw and kind of ugly.”

The attraction to the ugliness that music can be is part of why Dearth makes the music it makes. Of Martyrdom and Polluted Faith wasn’t made to please others and start attracting labels at a whim; it’s music that was made for the four people in the band, which you can see for yourself at Blue Lamp on Sunday, Feb. 18, 2018.

Allen and crew like the filthy darkness of the music they make. It sends the message they want to send. It’s not made for a mainstream audience; it’s for those who can revel in the filth right along with Dearth and find the meaning underneath it all.

Check out Dearth live at Blue Lamp (1400 Alhambra Blvd., Sacramento) on Feb. 18 at 8 p.m. Also performing will be Gloriam Draconis, Xenotaph and Barren Altar. For more info or to purchase tickets in advance, go to Bluelampsacramento.com.