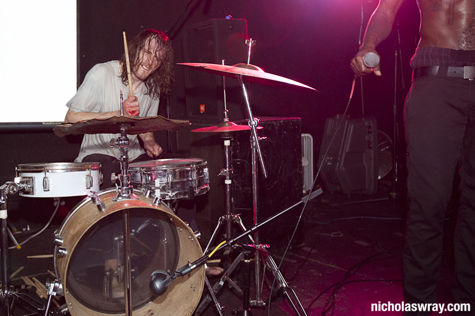 On Tuesday, June 7, DJ Whores booked dubstep DJs from distant lands like New York City and France. But when the downstairs cleared for an upstairs Death Grips set, for once Sacramento showed some goddamned pride.

Death Grips bears the rumblings of a strange new era for hip-hop–if the genre is even appropriate. Between Death Grips and the teenage riot of Los Angeles’ Odd Future Wolf Gang Kill Them All (OFWGKTA) crew, hip-hop seems to be embracing a DIY and punk mentality that hasn’t been prevalent in the genre since Fab Five Freddie was kicking it with Debbie Harry in the Lower East Side. Devoid of heavy-handed derivatives, Death Grips respectfully appeals to Sacramento and the indie world-at-large’s iTunes playlist without losing an ounce of visceral gnarl. The Ex-Military mixtape is the group’s call to arms through heavy bass warbles, juke break beats and vintage psych-samples from Link Wray and The Castaways. Critics jumped the gun when they hailed New York-based MC Waka Flocka Flame as the first metal god of rap. No one could have predicted Death Grips’ Stefan Burnett, a Kimbo Slice-looking dude from Oak Park, was lurking in the trenches with a deeper-seated metal intent with lyrics, “Dismiss this life/Worship death/Cold blood night of serpent’s breath/Exhaled like spells from the endlessness/In the bottomless wells of emptiness,” over the thunder of Zach Hill’s drums.

The Sunday prior to the Grimey set, Death Grips played a secret show at Press Club, a set that made its way to YouTube in record time. The Grimey announcement was as last-minute as it gets, with most of the curious anticipating a Davis house show as the unveiling of the mysterious Zach Hill project. The cloak was off entirely, as was frontman Stefan Burnett’s shirt as he stalked the stage, like any moment he might snap and start cracking skulls. No one was injured during the set, nor did a full-on mosh pit ever break out. The surprise was the rush to be on top of Death Grips without taking the stage–an instant embrace virtually unheard of for a local act. Burnett’s coined grunt of “Yuh” was mimicked on cue and other times in brief quiet moments, affirming his bark as the group’s battle cry. Sacramento is excited for its locally raised rap beast–enough to shed the cool, shed the cynicism, shed the apathy and get buck for 40 minutes in ToHo. It caught me off guard so much that I’m reluctant to mention it for fear it might backfire and curse the unabashed enthusiasm.

Whether we sustain our buzz in the home front or not, Death Grips is in takeover mode with or without us. This week (June 15), the group performs L.A.’s Low End Theory, a weekly melding of art and music held every Wednesday at The Airliner, a stage that made the careers of DJ Gaslamp Killer and producer/musician Flying Lotus. In the end, if Death Grips maintains an indifference to hype present within the music, it will always have a home in Sacramento. The nihilistic candor on tracks like “I Want It I Need It (Death Heated)” and “Spread Eagle Across the Block” boasts a lifestyle prevalent in Midtown yet to be captured sonically. I, for one, hope this is the beginning of many voice-shot nights shouting “Yuh” to come.