The Center for the Arts in Grass Valley is producing the 19th annual California World Fest this year and the lineup is better than ever. From Beats Antique to Lucinda Williams to Richard Thompson, it would seem there is no shortage of talent.

As luck would have it, Los Angeles’ Dengue Fever is one of the festival’s many featured acts. Ever since the release of their debut self-titled album in 2003, the band has been shaking up dance floors. From clubs in Southern California to shows abroad, this quirky ensemble has delivered a heady mix of Cambodian pop, garage rock and even psychedelia.

“The original idea of the band was simply doing ‘60s psychedelic rock from Cambodia but soon became something much different. When my brother and I were learning the songs initially, I was playing accordion. Later I picked up a Farfisa [organ made in the ‘60s and ‘70s] after visiting many different vintage shops,” said keyboardist Ethan.

Ethan cut his teeth first learning accordion from one of the greatest names in the industry. “I learned most of the keyboards from playing accordion at first. I studied with a teacher named Milton Mann and learned from his four different books. He was such an incredible musician and I learned a great deal from him,” he said.

Ethan soon realized that the Farfisas needed to be warmed up to work properly. He found out the hard way that the organs were extremely finicky instruments during a visit to Russia. “When we played at a festival in Russia, I brought the Farfisa, but the keys went flat and I had to use a different keyboard,” he said. “It was very challenging trying to re-learn those parts and find those sounds on the fly. I did play a second set later at a club and [the Farfisa] worked just fine.”

These days, he isn’t taking any chances on his equipment. “I ended up buying a Nord Stage keyboard, which I use when we play live now. It has all the sounds that I need and more,” he said.

Ethan’s keyboard parts, however, are not made without much thought and deliberation. “First I try to find a tone that fits the song best. One of the best things about playing keyboards is you have an infinite amount of unique sounds to pull from. I like the variety,” he said. “I just try to find a rhythm and the notes that work around the vocals or other instruments. Once we have all recorded our parts we have listening sessions then we talk about what we like, what clashes and what needs to be changed.”

Dengue Fever’s latest album, The Deepest Lake took some time to record. There was a long break of four years in between full-length albums.

“We started our own record label so that took a little bit of time to get things sorted,” Ethan explained. “Writing is one of those things that takes a little longer with us because we want to get the vocals and the music exactly as we think it should be.”

Curious listeners looking for the lost sounds of the Vietnam War era and the psychedelic sounds of the ‘60s will get lost in wonderful tracks on the new album, like the beautiful “Golden Flute,” which closes the record, and “Deepest Lake on the Planet,” which shuffles and sways with reckless aplomb.

Ethan lists the latter as one of his favorites from the new album as well. “‘The Deepest Lake’ is one of my favorite songs. It feels like we ventured in a new direction. I like the dark moody vibe that the song has and the vocals remind me of Pan Ron [one of the best female Cambodian singers from the ‘60s],” he said.

“’Tokay’ [the album’s lead track] is another song that makes me happy,” Ethan went on to say. “It’s about the Tokay gecko that we see and hear whenever we visit Cambodia. The gecko is really loud and makes funny sounds at night. At one point in the song our singer, Nimol, croaks like the Tokay.”

Whereas most bands signed to labels are saddled with time constraints and deadlines, Dengue Fever had time on their side while recording The Deepest Lake. They had no one to answer to but themselves.

“We were not rushed whatsoever and the release of the new album felt like it was a rebirth of the band,” Ethan said. “There is an excitement now around the band like when we first started to get a big buzz. At that time, we won a handful of awards and even were recognized by LA Weekly as the Best New Band of 2003.

“We were signed to many labels and released records on Real World, Concord/Fantasy Records, M 80 and Web of Mimicry,” he continued. “TUK TUK Records is now our own business and nobody can tell us what to do.”

Although The Deepest Lake was quietly released on their own TUK TUK Records label in January 2015, the album speaks loudly. It includes 10 rump-shaking songs featuring quirky keyboards, horns, shuffling drum rhythms, hypnotic bass lines and some crafty guitar work that is sure to catch fire once the songs are seen or heard live.

“We recorded the new album at our Shoebox Studio, which is owned by our bassist, Senon,” Ethan said. “We pretty much used all of our band money to buy mics, gear, compressors and other accessories to make the recording the best we could this time around.”

Since their inception, Dengue Fever have garnered many fans in the musical community, from The Kinks’ Ray Davies to Metallica’s Kirk Hammett to Peter Gabriel.

“We recorded at Peter Gabriel’s studio in Bath,” Ethan said. “It was an amazing place and he let us use any instrument we wished. One room was called the Stone Room and it was rather amazing to stand in that room and take in the architecture.”

One star-studded encounter stood out from the rest, however. “Jello Biafra [of Dead Kennedys fame] came to one of our shows and took literally one of everything from our merch table including vinyl. That was kind of awkward. He then asked if the band would cover ‘Holiday In Cambodia,’ a DK classic at the next show. We learned it for the next show and, of course, he didn’t show up,” said Ethan while laughing.

Additionally, they’ve also found some friends in the film industry. “I never would have imagined that Jim Jarmusch would use a song [of ours] in one of his films. He used ‘Ethanopium’ in his Broken Flowers movie. We also became friends with Matt Dillon who used a song in City Of Ghosts,” Ethan said.

Although very modest, he left out the fact their music was also included in Weeds (Showtime), True Blood (HBO), CSI, The Hangover 2 and many other mediums including documentaries. Similarly, the band has become quite a tour-de-force overseas and have been included on myriad festivals including Treasure Island, Roskilde (Denmark), WOMEX (Spain), Glastonbury (United Kingdom), Bumbershoot (Seattle) and Transmusicales (France), among others.

“We have been very fortunate to have played overseas in the past,” Ethan said. “We’re gearing up to go back in September and we’re playing at both clubs and festivals. In London, we’ve headlined our own shows before, but we’re not big enough yet for a full-scale tour.”

Each and every member are integral for capturing Dengue Fever’s current sound as Ethan is quick to point out.

“Everybody really contributes to the songwriting, and we’ll use ideas from everyone when they make sense. We all consider this band a very important project and put 100 percent into what we’re doing and I think you can hear it,” he said.

“We plan to keep touring and recording new music as long as we can.”

See Dengue Fever live as part of the California World Fest on Saturday, July 18, 2015, at the Nevada County Fairgrounds in Grass Valley. One-day passes are available for the four-day music fest (now in its 19th year) starting at $60. To purchase tickets, go to Worldfest.net where you can also find full line-up information. 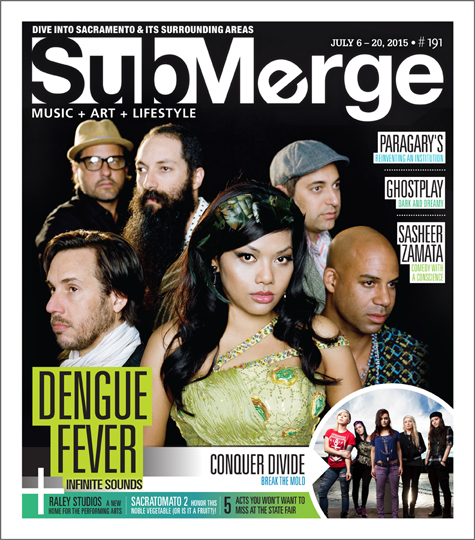