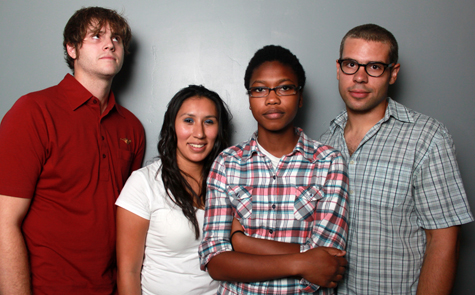 Never expect a band to be punctual.

“Hopefully everyone’s on time,” says Leticia Garcia, lead guitarist of experimental, indie rock quartet Der Spazm, the song “Electric Feel” by MGMT humming at a low volume within the confines of her gold Honda Accord. Bassist and backing vocalist Ashley Maiden rides shotgun; the two band mates chat about the latest Exquisite Corps show and the daily grind of their jobs. This casual, end-of-day gab kills time on the trek from Midtown to Sacramento Rehearsal Studios, where the band practices for their upcoming show at Old Ironsides celebrating the release of their six-song EP, 1000 Days.

Although Der Spazm have only solidified their lineup since May of last year, the band has performed on the steps of the Capitol in support of Sacramento Pride Week, admits they felt comfortable recording their EP in a former insane asylum in Stockton and have several colorful stories to share, like a Bay Area road trip gone terrible–involving barf, bands and a backseat passenger who unfortunately fell victim to said barf. From surviving car accidents together to supporting one another in the heat of Proposition 8, Der Spazm have grown into a tight-knit group of friends who just so happen to play in a band together.

Pulling up to the barbed wire-guarded practice space, Garcia presses a plastic cardkey to a black machine near the entrance, instantly cuing the gate to roll open and granting the two access.

Once inside, Der Spazm’s weekly routine begins. Drummer Andy Fisher sits behind his kit, idly jamming on his snare drum and high hat cymbals, completely encased behind the beats he creates. Maiden fidgets with her wounded finger and cheap band aids once more before plugging in her bass, and Garcia swings her Gretsch electronic guitar over her shoulder, the instrument appearing heavy on her petite frame.

Arranged orange and black chords, organized tools and guitar equipment hang to the right on one wall, while a U2 “The Best of 1980-1990” poster is tacked on another near the door of room No. 130. A stuffed tiger rests proudly above a PA speaker, its tail dangling down the side. The deep, sloth-like chug-chug of metal-inspired guitar chords erupts from various rooms lining the hallways of Sacramento Rehearsal Studios, whose bathroom still reeks of piss and 99 Cents store toilet cleaner. Back inside their practice space, a makeshift recording filter crafted from a simple wire hanger and an old pair of chocolate-colored panty hose lays abandoned atop a guitar amp.

“Sorry I’m late,” says Dillon Christensen (guitar, vocals), entering the room with the grace of Seinfeld’s Kramer. He sets down a massive, pastel-colored plaid board lined with every effects pedal imaginable: distortion, equalizer, digital delay, blues overdrive, memory toy, digital reverb and a handful of others. Each rectangular-shaped pedal is assigned to a certain spot upon his wooden platform, each holding the ability to immediately transform the sound of Christensen’s guitar with just the mere tap of a foot.

With every member now present, an impromptu jam session quickly begins. Garcia’s long brown locks sway to the momentum her body creates as her hand twitches up and down the fret board, fingers squeezing out euphonious melodies followed by Fisher, crashing in on drums, keeping up the momentum Garcia just developed. Stomping on his distortion pedal, Christensen adds a third layer to the mix, slightly changing the speed and volume of the song as Maiden, with eyes closed, seals the experimental rock base Der Spazm emanates with groovy bass lines and a James Brown swagger as her feet take on a path of their own dancing to the low, supporting sounds of her Fender Jaguar bass guitar.

“I could have had a shitty week and work is fucked, and I don’t want to be home and you feel like the world’s going to end, but then we get together; something about us playing, almost makes it feel like we’re not here, like we’re somewhere else,” says Christensen of the band’s chemistry.

Der Spazm started recording their 1000 Days EP in late November 2010 and now the release show is only weeks away. However, the location in which the band chose to record their EP was a bit strange in itself. On the weekends, the band would drive down to record at an old insane asylum in Stockton, later changing its tune as the Alan Short Center, according to Christensen, an institution for adults with developmental disabilities using the arts, like music, to heal.

“The environment really helped us to focus in and bang shit out,” says Christensen.

“Comfortable in an insane asylum, you know,” Maiden jokingly adds.

But what’s more insane is the wide array of incidents this band has endured in each other’s company. In January of last year, Christensen and Garcia survived a car accident on I and 18th streets. And though they are not to blame, Christensen does admit he was listening to Sonic Youth at the time and he thought I Street was not in fact, a one way street. Fortunately, both survived the accident, but the car ride adventures don’t stop there for members of Der Spazm.

“I went to see the Dodos with the Alcohol Plague in San Francisco. I was the designated driver. They got wasted and we were doing OK on the way home, but we get on the bridge and all of a sudden one of them barfs out the window and I’m laughing, and the guy in the backseat starts yelling, ‘It’s in my mouth,’” says Garcia, laughing at the memory.

Still, in times of misfortune, or in times of strange entertainment involving a little roadside spew, Der Spazm used it all to write track one on the 1000 Days EP called, “Happy Accidents.”

“It’s just about being content with how things are and realizing that things will happen, happy accidents will happen,” says Christensen.

But, while some songs are written from a place of laughter, others take a more political stance, like in their song “Sentinel,” written by Maiden in the heat of Proposition 8.

“I wrote ‘Sentinel’ about all the Prop. 8 stuff that was happening,” says Maiden. “Then, Prop. 8 passed and there were rallies all over the Capitol and California. The queer community just came together and it was amazing. And I was like, ‘Love is born in the heart of revolution.’ I think that was the best drunk line I ever came up with. It can apply to anything.”

Der Spazm may be the most diverse group of musicians when it comes to race, gender and even sexual orientation in Sacramento, consisting of two men and two women musicians, one of which happens to be a lead guitarist. Some work for the state, some are full-time students at Sacramento State, one works construction, while the other is watching the quality of our water and environment. But, regardless of who’s who, the members of Der Spazm collectively agree they just click and their year-long struggle to release a finished package of music has finally come to a close.

“We’re finally getting something out that we’re proud of. This is us. This is just a snapshot of our sound; it’s just who we are,” says Christensen.

Der Spazm will celebrate the release of their 1000 Days EP with Babs Johnson Gang and Mr. Loveless at Old Ironsides on Saturday, Sept. 24. The show starts at 9 p.m. and will cost just $5. 21-and-over only.