For the Record | Desario Returns with Their Second EP This Year, Haunted 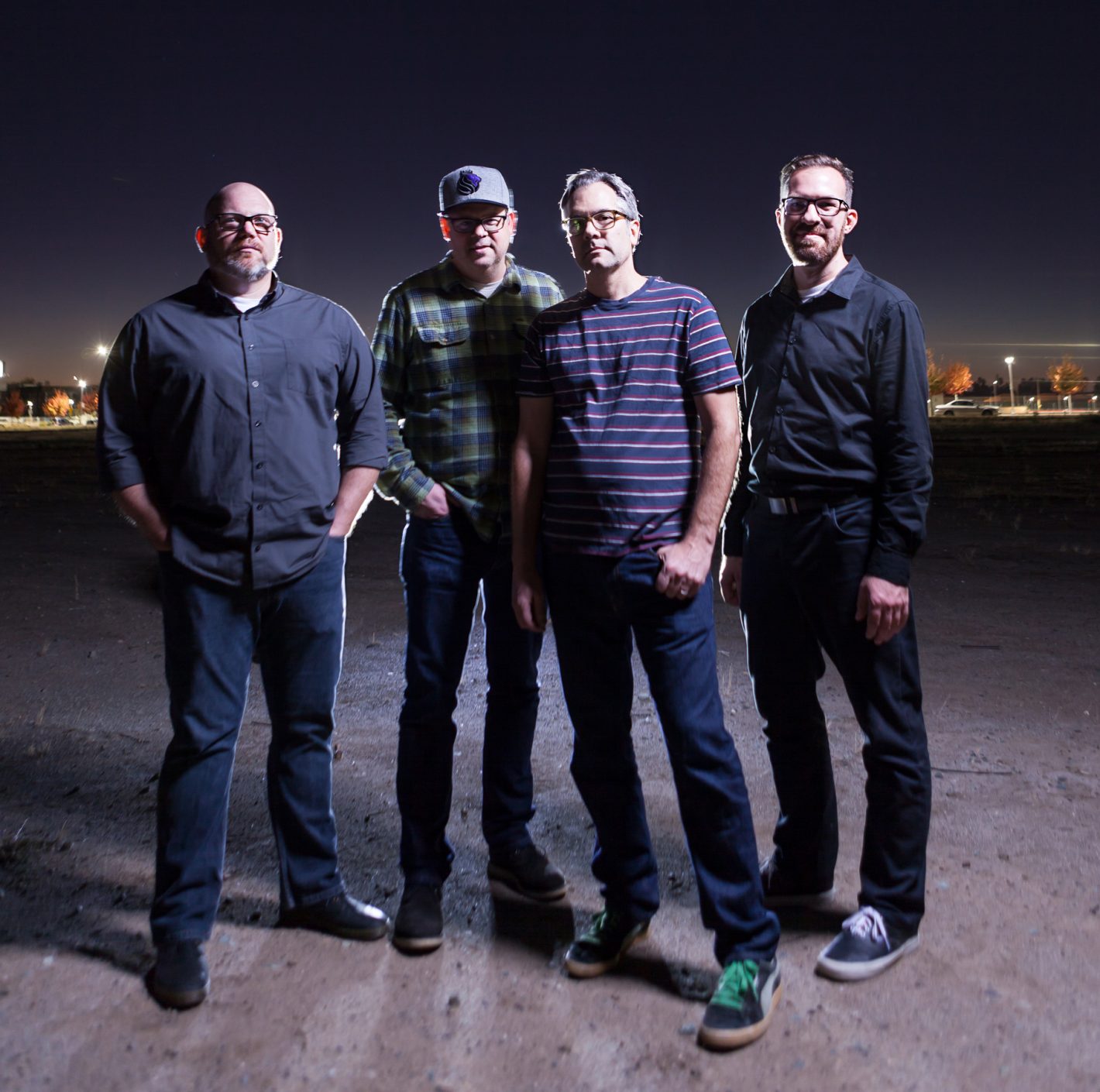 Longevity in the music scene is difficult to achieve. Weathering the storm of band drama, touring, day jobs, vices, fickle fandom and writer’s block can be a practical superpower.

Desario formed in 2004 out of the ashes of the band Holiday Flyer, which included members John Conley and Michael Yoas. Holiday Flyer started in the early ‘90s. Conley and Yoas met as teenagers. They actually learned to play guitar together.

“We were about 16, 17,” said Yoas in a phone interview with Submerge. “We were both in high school—we didn’t go to high school together—but it was during a period in time when I lived in Sacramento during high school. We met through family members. My dad and John’s uncle were really good friends. We started playing music together almost immediately after we met. We pretty much learned how to play guitar together before we got good at playing guitar.”

To say that the members of Desario (also including Mike Carr on bass and Kirklyn Cox on drums) have been through a lot over the years is obviously an understatement. In addition to the album Desario is due to release, Haunted, they also released Red Returns earlier this year in April, as well as two prior full-length albums. Holiday Flyer had four full-length albums, as well as three EPs.

“When I look back and I see the number of releases and everything, it’s pretty cool,” said Conley. “Time-wise, it doesn’t feel that long, but looking back at some of the stuff, it does seem like it was such a long time ago, almost like a different life in some ways.”

Haunted, due out Oct. 28, 2016, has the band exploring a more intimate side, with the songs having more of a live and stripped-down nature. Much of the album has a hazy, dreamy feel, tracks like opener “Black Dream” and title track “Haunted” feel like slow dancing at your high school dance after hot-boxing your friend’s van. The band cites influences from the Britpop and shoegaze world.

“The Haunted EP and Red Returns both sound a lot different than our previous recordings,” said Conley. “They’re definitely more raw sounding. They’re a little bit more stripped down … We didn’t really do a lot of extra production. They sound like when we play the songs live. It’s kind of what we were going for, we wanted a more live, more gritty, raw feel.”

The band took a different approach to the recording process. In the past, Desario recorded their own albums, with Yoas behind the board handling production and engineering duties. However, this time around they opted out of handling everything on their own and enlisted outside assistance.

“We recorded [Haunted] with Tony Cale, the drummer for Soft Science, currently,” said Yoas. “He had a home studio when he was still living here in Sacramento. Previously we have done everything on our own, but we just wanted to mix it up a little bit, so we recorded it with Tony, and it was a good experience. It was very casual, he made it easy for us.”

There’s one other unique quality about the recording session that produced Haunted. As mentioned earlier, Desario started their career putting out two full-length albums (Mixer and Zero Point Zero); however, the last recording session didn’t work as a single album to the band. So, after stepping back and looking at the material, the band decided to split the songs into separate EPs, Red Returns and Haunted, feeling the two stood on their own, and needed separate releases.

“It seems like we start recording every time we have 10 or 12 songs ready to record,” said Yoas. “Then, as we get into the process, it starts dictating where we think it’s going to go. This one, for whatever reason there was like a natural break with this batch of songs. There was two separate releases amongst these songs.”

However, Yoas explains, he and the band intend to retake the reins going forward.

“For me, being the person that has recorded us and will continue to record us from this point moving forward, it was odd to give up the reins a little bit and go with someone else’s ideas and vision,” he said.

Typically, one would expect following a release (even two in a single year), a band would be planning to set aside a few weeks or so to tour in support of their album, but Desario is not your typical band. Actually, to date Desario has not toured at all, outside of the occasional show out of town. Mostly, they’ve kept close to home. However, they have had discussions of changing this, and would like to in the near future.

And what will the future hold for Desario? Well, they’re ready to head back into the studio, of course.

“We’ve got about an album’s worth of material written that we just need to put the finishing touches on the arrangements,” said Yoas. “We will probably start recording a few of those pretty quickly here. We definitely want to get something recorded and released in 2017.”

“The next recording will be different,” Conley adds. “You can kind of hear a taste of what the next batch is going to sound like. The last song on Haunted, it’s a cover [of a song] by the band A House of Love, and we recorded that just a few months ago. There’s a shoegaze blog in Brazil called The Blog that Celebrates Itself, they’re doing a series of compilation albums, tribute albums to shoegaze, Britpop bands from the ‘90s, and we were asked to contribute a song to that [series]. We were so happy with the results, we decided to put it on the EP as well.”

Having released two EPs this year, and hoping to get another album out next year, one thing you might notice looking at the dates of their releases is the gap between the release of Mixer, in 2012, and Red Returns, this year in April. Well, the band had a change in the lineup, at drums. In regards to exiting drummer Jim Rivas, Yoas explains, “As cliché as it sounds, it was just musical differences.”

“Kirk at the time he had recently moved to Sacramento, he was working in Arizona,” said Conley. “He was going to architecture school, and he had recently graduated from school, and he moved back here to Sacramento and he was looking for a band to be in … He wanted to play drums again. He hadn’t played while he was going to school. It just worked out.”

“Part of the reason for the delay between releases was just getting the band back on track,” said Yoas. “Getting used to the new lineup, reworking the batch of songs we have with Kirk. It’s different. We’ve changed a lot since he has joined the band. Now that we’ve finished up these two EPs, were changing and evolving again.”

That change, for better or worse, is quite possibly just a record of age and growth. When you’ve been playing together three decades-plus, it’s hard not to evolve together. Desario, especially with members Conley and Yoas’ long-term relationship, is no different than looking at a beautifully seasoned and well-weathered marriage. While there may have been tough times, they have each other, and no matter what changes come, they will still be themselves.

“We keep changing and doing what we think is different types of music,” said Yoas, “but in the end there’s always something in every song that’s always consistent and sounds like Desario, in my opinion.”

“Whatever we do ends up sounding like us,” echos Conley in agreement.

Celebrate the release of Desario’s new EP, Haunted, on Nov. 1, 2016 when the band will play Starlite Lounge (1517 21st St., Sacramento). Also playing will be Clay Rendering and Glaare. This 21-and-over show will carry an $8 cover and will start at 8 p.m. For more on Desario, check the band out at Facebook.com/desarioband. 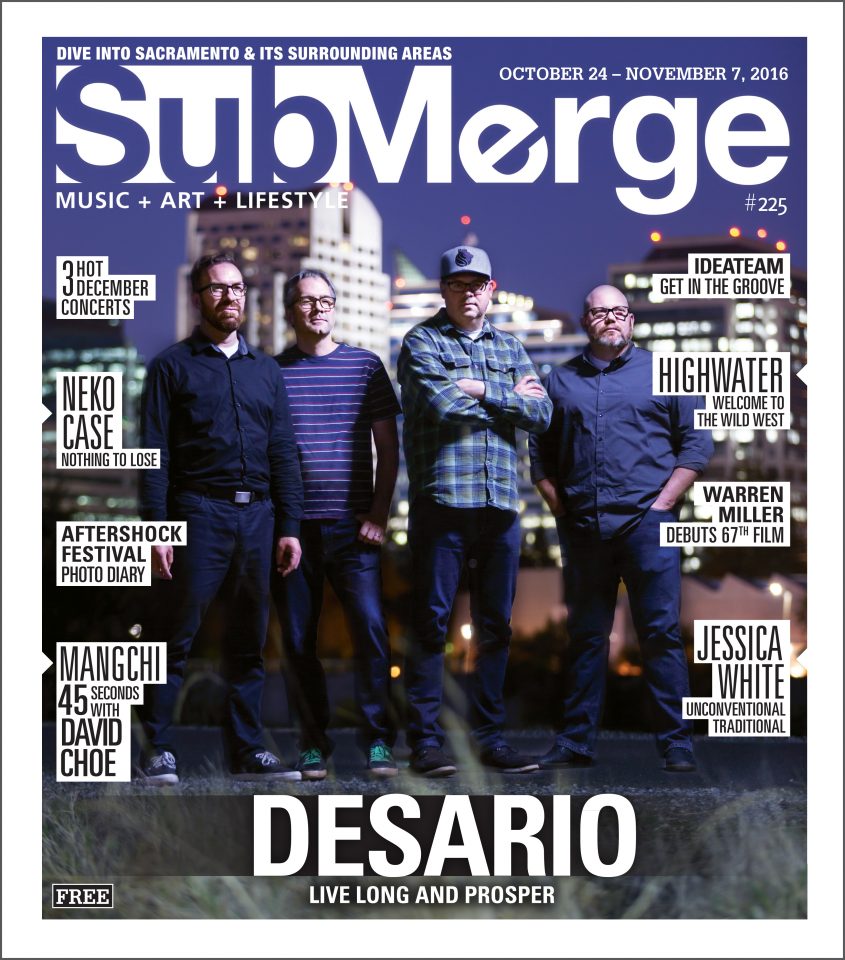