Did A Local Rocker Throw The Hot Dog At Tiger Woods? 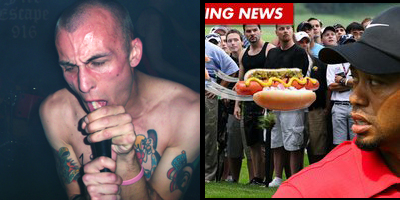 In what may be the most bizarre story ever involving a local musician, J.P. Hunter of the local sleaze-rock outfit Get Shot! went on record early last week admitting that he was in fact the man who threw the infamous hot dog at Tiger Woods at the Frys.com Open golf tournament last weekend in San Martin, Calif., a stunt that made national news. Hunter did numerous radio interviews including one that I caught on Oct. 11, 2011 on the widely listened-to Mark & Brian program, where he explained that his band had a show in Reno, Nev., the night before and that he’d been “drinking Jameson all day” and that he and a band mate got free passes to the tournament from some girls while hanging out at a Starbucks. “I just kept on drinking and drinking,” Hunter told Mark & Brian. “I was surprised I got past security,” he said. The interview lasted a few minutes and was rather light-hearted and funny and Hunter got to, of course, plug his band while explaining why he allegedly threw a wiener at the world’s most famous golfer. Where this story takes a weird turn, as if it isn’t already odd enough, is that just a couple days later a multitude of legit news outlets from all over started reporting that the hot dog thrower wasn’t Hunter of the band Get Shot! at all, it was instead 31-year-old Brandon Kelly of Petaluma, Calif. Numerous sources confirmed it and Kelly did a number of interviews himself where he shared that the movie Drive, of all things, inspired his hot dog chuck at Tiger. After scrounging up video of the incident on YouTube (search “Spectator throws hot dog at Tiger Woods”), it’s quite apparent that it’s not Hunter throwing the dog. The dude on the video is husky and has a full head of hair; Hunter is skinnier and has a shaved head. Either way, hot dog toss or not, you’ve got to admit that it was a pretty genius way for Hunter to plug his band and get tons of free press via major radio outlets. Look for Get Shot! shows posted on their facebook page. And expect things to get weird, as they tend to do during Get Shot! shows. Hunter told Mark & Brian during his (fake) interview, “At our shows, we throw a lot more than hot dogs at the crowd.” And there you go, Get Shot!, even more free press.