Don’t grieve over the loss of badass punk rock singer and guitarist Brody Dalle of The Distillers quite yet—Dalle’s new band, Spinnerette, offers more ear candy for your listening pleasure.

The Distillers released their final album, Coral Fang, in 2003. The band came to a natural end just a couple years later. “Creatively we had hit a wall and we were exhausted,” says Dalle. “We had been on tour for two years straight and we were a raw nerve”¦ It was a really unhealthy time, and we all imploded.” At first, she remembers the breakup being pretty messy, but alliances have been restored; Spinnerette features former guitarist for The Distillers Tony Bevilacqua. The band also consists of bassist Alain Johannes (Eleven, Queens of the Stone Age) and drummer Jack Irons (Red Hot Chili Peppers, Eleven).

Spinnerette was officially formed “on a blue moon” in mid-2006, says Dalle. She and hubby Josh Homme from Queens of the Stone Age had just experienced the arrival of their first child, Camille, and Dalle was aching for music. “I hadn’t done music for so long at that point, and my life had changed so much. I was desperate to have a little glimpse of myself.”

If a new maturity can be heard in Dalle’s music, it’s likely that her daughter is part of the reason. The transition from full-time musician to mother was difficult. “It was probably the hardest transformation of all time,” she says. Camille is now 3 years old, and is apparently not fazed by having rock stars for parents. “She just thinks that everyone’s mom does this for a living,” Dalle laughs.

Overall, the chemistry between the band members has been amazing. “I started writing with Alain after Camille was born and it kind of just organically happened, and became this thing magically overnight,” Dalle says. “It was like I planted a magic bean and it sprouted.”

Their debut album is self-titled, and was released in June 2009 after many difficulties. “Everything you could throw at someone, we had thrown at us,” Dalle remembers. They were originally going to release their album through Sire Records last February, but had some issues going through a major record label. In the end, they went with Rush’s label, Anthem Records, which Dalle feels was a fitting choice. “[Rush] started a label because nobody else would sign them, so it seemed so appropriate for us to sign
with them.”

Die-hard fans of The Distillers are divided in their opinions of Spinnerette. “Some of them like it and some of them hate it,” Dalle says. “It’s kind of to be expected.” To be fair, fans of The Distillers may be disappointed if they’re expecting to hear the same rebellious punk gal screaming with post-adolescent angst. Spinnerette’s songs are catchier and more melodic, hinting toward a newfound musical maturity.

But Spinnerette’s music certainly won’t be too mild for your taste buds—the songs go down smoothly but leave a bitter taste at the back of the throat.

Dalle writes all the lyrics herself, and she describes the album’s theme as “relationships and transformation, and coming out unscathed.” She writes with the same in-your-face attitude you would expect from former frontwoman of The Distillers, such as in the song “Rebellious Palpitations,” where she writes: “Hey what’s your name?/I’ll take everything you’ve got/All aboard the drunk express/Bottles of wine in excess.“ Dalle wails in her characteristic raspy voice about sex, love, pills, sex, a bit of wine and that oh-so-heartless cupid. Oh, and don’t forget about sex. Surely Dalle is no tempered flame.

While Spinnerette’s studio releases feature the same core group of musicians, Dalle takes a different approach to live shows, recruiting talent from amongst her vast group of musical friends and acquaintances. “We don’t have to be so serious about being a band anymore,” Dalle says. “It seems so silly to sign your life away and put your heart on the line. We’re just going to go out and play shows.” Musicians who have played with her include Vincent Hidalgo, Bryan Tulao, Dave Hidalgo Jr. (Suicidal Tendencies), Nicole Fiorentino (Radio Vago) and Matt Caughthran (The Bronx).

Spinnerette previously toured with Band of Skulls, and are now embarking on several solo shows, as well as the 2009 Capitol Hill Block Party in Seattle and the Virgin Festival in Vancouver, BC. Spinnerette will be playing at the Boardwalk in Orangevale on July 22, 2009. 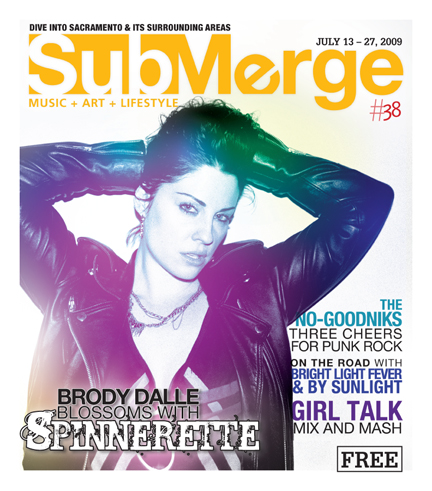