John “DJ Crook” Molina, aka CrookOne, has been a staple Sacramento DJ for nearly 15 years. The Los Angeles native came to Sac in the mid-’90s, and we have claimed him as our own ever since. “My first official gig was at the Monkey Bar in 2002. That kind of got the ball rolling for me. Years later, and I’ve DJed at most places that will allow it in this town,” says Crook.

DJ Crook has been known to bring his funky music palette to countless party epicenters in our area. You may have experienced his work at the Golden Bear, where he has held a residency for more than a decade every Friday night and Second Saturday, or for his randomly occurring (soon-to-be-resurrected) FFFreak dance party at The Press Club to name just a few.

He is also one of those DJs who can seamlessly go from a late-night bar/dance party setting to providing backing sets for full rock bands. When he wasn’t manning turntables at nightclubs and bars, he was working with bands like Team Sleep, Decibel Devils and Deftones, where he would intertwine his work with the likes of Chino Moreno and Zach Hill.

As a new year approaches, Crook has a whole fleet of projects on hand to fill it. He met with me for a beer to discuss the current state of his DJing endeavors, and to prove that he’s not slowing down as the years pass. Not only is his band, Team Sleep, working on new material, but his weekly DJ nights are expanding to include at least one regular slot at the new B-Side vinyl bar. His work at B-Side will be experimental at first, and as Crook told me, “a lot of different crowds have come and gone … What I was playing back then is a little different from now, but I also have to adjust to mixing the old with the new. It’s all a matter of keeping up with it all. I am grateful to be doing this.” 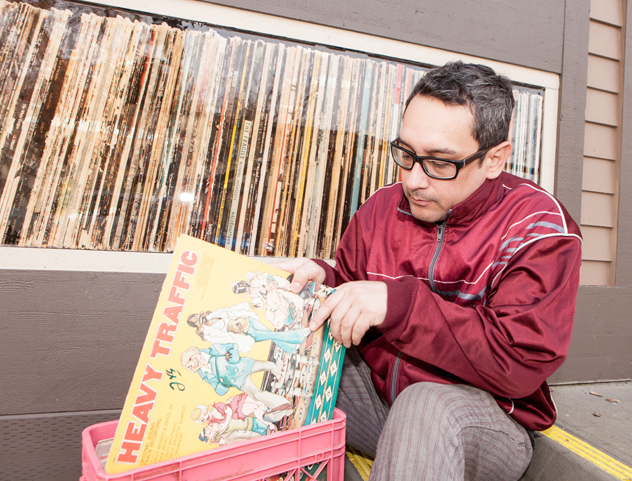 How did you get yourself into DJing?
I’m gonna age myself now … It started way back in the ‘80s when I was in high school and trying to do the whole break/graffiti thing. I would listen to this radio station in L.A. called KDAY, and they had live DJ mix shows. It was probably around 1985 … and I thought it was pretty interesting and something I would love to do. I would just listen to the different guys DJing and study their techniques.

Then, I moved from L.A. to Whittier and met some guys who were DJs there. I hung around them and from there, got my own turntables. I was about 15 or 16 at the time. We were all just a bunch of kids, but they were all so good at what they did. I would watch them and then go home and sit in my room and create my own stuff.

What sort of records captivated you at that time?
At that time, I would say the Planet Rocks, Egyptian Lover, Run DMC and stuff like that. Early hip-hop and mid-’80s electro were my thing. At the time, I still didn’t even have a job, or was barely in the process of getting one, so I didn’t have any records. I would go into my dad’s or stepmom’s records and try to mix anything I could get my hands on; I would take something like a Madonna and mix it with something of my own.

How did you end up in Sacramento?
My friend, Frank Delgado, and a couple of other friends of mine, moved down here. Frank got a DJing gig and actually ended up meeting the guys from Deftones and eventually joined the band as a DJ. He would always tell me to come up, so I found myself visiting really frequently … pretty much just going home to work. The year 2000 is when I decided to make the move to Sac. I saw that I had opportunities here.

You eventually worked with Deftones when you moved to Sac. Tell me how that relationship blossomed.
It was 1996 when I first met those guys, and they were beginning to get really big at that time because their first record was just getting ready to come out. So the singer [Chino Moreno] played me the record and I played him a hip-hop demo tape, and he listened to the whole thing. Back then, it was cassettes. When I moved up here, they had put out their third record. My friend Frank Delgado really connected me with those guys, and I’ve collaborated on a couple of songs and projects ever since. Chino and I are both in the band Team Sleep.

Is Team Sleep alive and well?
We did a show last October in Woodstock, New York, and that record came out in July. We are working on the DVD part of the performance now. Currently, we are working on new material. Zach Hill has been super busy with Death Grips, so he hasn’t been involved this time around, but I’ll text him every now and then (mostly when I’ve been drinking), to talk about projects and catch up. He’s always working on a bunch of different things. We have Gil Sharone working with us on drums right now. He came with us to Woodstock last year, which wasn’t supposed to initially happen, but I am happy it did. He was originally scheduled to go on tour with Marilyn Manson at that time, but that somehow got delayed so he ended up with us. We are definitely working on some new things and will be chipping away at a new album for the coming year with a few shows in the works too.

How did you become connected with B-Side?
I know the owners. I’ve known Jason Boggs and Garrett Van Vleck for years, and actually Garrett used to be the door guy at Monkey Bar many years ago when I was a DJ there. Jason kind of told me what his vision for that bar was, and it was really exciting. I was just waiting and waiting for it to open, I was really anxious to just get in there.

It is really great. It’s so new, and I have only had a couple of nights there, but the environment and the way it looks is awesome. It has this old school ‘70s feel. They did such a good job with the interior. When I had my night there, we did the all-vinyl thing, and there was good energy and a good turnout. Me and a couple of guys are going to try different themed nights and see what really sticks.

What are your nights there like?
Thursday I am going to be DJing with my friend Ben [Johnson], of Delta Breeze Records in West Sac. We are focusing on modern funk. Also, on the first Saturday of every month, when he isn’t busy touring with Deftones, Frank Delgado and I will be trying to collaborate. Years back, Frank and I actually had a night at Monkey Bar we would put on called “Heavy Duty,” and we are looking to revive that concept; it has a really open format.

What sort of things are you looking forward to in 2016?
I am hosting a New Year’s Eve party at Press Club called “New Jack Fling.” I usually host it a few times a year. It’s more of a late ‘80s/early ‘90s new jack swing dance party, kinda like Tony! Toni! Toné! Also, same-era hip-hop and R&B will be included. It’s always such a fun night.

I will also be continuing to do my night at the Golden Bear. January will mark my 10-year anniversary of DJing there. Sometimes I forget how long I’ve been doing this.

Don your favorite pair of stonewashed jeans and swing down to The Press Club to see DJ Crook and others spin late ‘80s and early ‘90s hip-hop and R&B at their New Year’s Eve celebration, New Jack Fling, on Dec. 31 (duh). The party starts at 9 p.m. and the cover is just $7. Decade-appropriate attire is not mandatory, but it is encouraged. The Press Club is located at 2030 P Street in Sacramento. 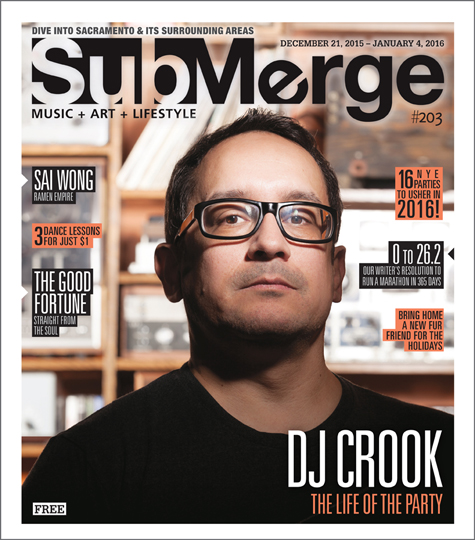