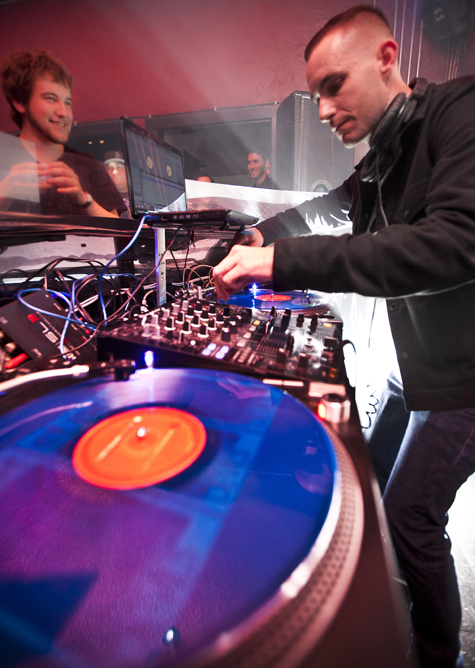 [Editor’s note: We here at Submerge were devastated to hear of Daniel’s passing on April 8, 2017. His impact on Sacramento’s music and art communities will never be forgotten. Rest easy, old friend.]

The P and 21st block is a sleepy pocket in Midtown. Tucked away from the white noise of the freeways, littered with parking lots and office buildings and a tattoo parlor, it’s low-profile–unless it happens to be a dance night at Press Club or The Townhouse.

Both clubs are infamous alternatives to the posh world of dress codes and bottle service. At Townhouse, or Toho as some call it, the beer’s cheap, the drinks are stiff, the tagged-up bathrooms are claustrophobic and the entire interior is low-lit to obscure seedy behavior. It’s the only spot in town suitable for a dubstep and bass night called Grimey. Being coined by a local DJ who goes by Whores is just another notch in its anti-glamour esteem.

On his birth certificate, Whores is Daniel Osterhoff. He’s Dan to those who knew him before he was Whores. We met at his apartment on the north side of Midtown a few hours prior to Grimey. He does not live in a high-rise loft or a gutted warehouse that doubles as a skate park. He lives like the rest of us, in a modest complex with carpeted floors and enough space to stretch. Two fellow DJs, one of which was Jubilee just flown in from Miami, and Grimey resident photographer Eric Two Percent were hanging out. The walls were like those you’d find at any graf-writer/graphic designer’s abode; dozens of pieces from abstract to lowbrow with the exception being a giant rusted-red W mounted on the wall.

“Russell Solomon of Tower told me the letters were lying around on the roof of Tower Cafe,” Whores said. “So one night I climbed up there and took the W.”

While grabbing me a Red Bull from the fridge he apologized for the hair on the kitchen floor. A stylist friend that was hanging out had sharpened Whores’ close-cut before my arrival.

We stepped outside for a cigarette and chopped it up. It was not long before James Blake’s controversial quotes to the Boston Phoenix that caused a stir in dubstep were discussed. An uber-popular British electro-soul and dubstep artist, Blake railed the genre’s burgeoning “frat-boy market,” which is being labeled “bro-step.” His rant was widely publicized for statements like, “It’s a million miles away from where dubstep started,” and “It’s been influenced so much by electro and rave, into who can make the dirtiest, filthiest bass sound, almost like a pissing competition, and that’s not really necessary. And I just think that largely that is not going to appeal to women.” Periodically throughout the night, Whores and his fellow DJs coolly reminded me that it’s neither their taste nor in step with the identity of Grimey.

The success of the night is owed to the attention to taste, which can be misperceived as snobbery, but should not be construed as such. Even when resident DJ Jay Two approached Whores with the idea of a dubstep night, Whores was interested but hesitant due to a feeling that dubstep had reached its high water mark.

An attendee of Grimey is not given the opportunity to gripe “not this damn song again,” because its resident DJs (Whores, Jay Two and Crescendo) are intent on remaining ahead of the curve by playing records acquired on advance or playing the newest tracks they think need to be heard. It’s a dedication to the cutting edge that is scarce in the local clubs that rely on Top 40 or are just held down by stubborn old dogs disinterested in new tricks. 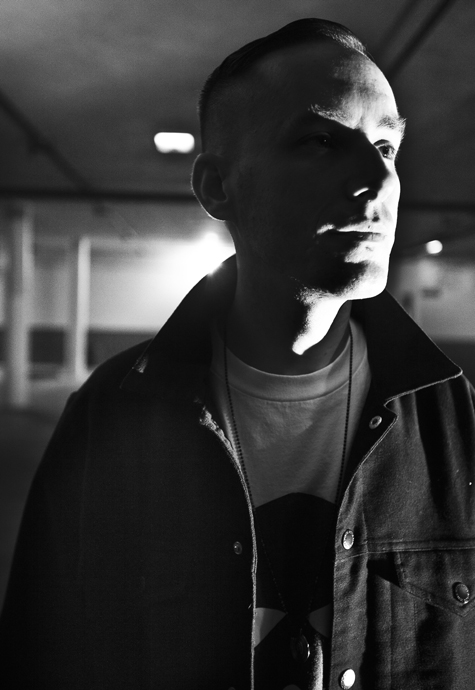 “I just hold steady with playing what I think people would like,” Whores said. “I’ve attended a lot of different dance nights everywhere from New York to Los Angeles, Seattle, Portland, San Francisco and Oakland. From the most underground to the most mainstream clubs, and I’ve taken little elements from each. But once you get the word out there, the word kind of does it itself.”

Much like fellow local veteran DJ, Shaun Slaughter, Whores is well traveled. He started DJing in 1997 as part of 916 Junglist before moving away in 2000 to Portland. Each move, he connected with different crews in Portland and Seattle before moving back to Sacramento in 2005. “Most people don’t know that about me,” he said. “They just think I came on the scene or think I’m from Portland, but I’m born and raised in Northern California.”

I reconvened with Whores outside of the Townhouse around 9:30 p.m. He was talking with Matt B of Bass Science, who had arrived in a rental from Tahoe. Whores was quick to share his knowledge on Bass Science, practically orating a short bio. “He started the whole glitch hop scene basically,” Whores said. “When Glitch Mob was starting out and Lazer Sword, he was right there. This guy’s got quite a big history in the newer EDM alternative craze.”

All professions have a language and despite my familiarity with Grimey and its music, talking to the actual artists involved meant brief interruptions to ask if they were saying “IDM” (intelligent dance music) funny, only to learn that EDM translates to electronic dance music–the domain in which the sub-genres operate. The confusion then sparked the two DJs into weighing the blurring sciences between EDM and IDM. “Some of it is [IDM] though nowadays,” Whores said. “Some of the juke stuff. Machinedrum’s new album.”

“EDM is basically a very blanketed term,” Whores continued. “Nowadays everybody plays a little bit of everything because people’s attention spans are about this small [makes his index and thumb nearly touch]. So if you play one genre of music, you’re pretty much pigeonholing yourself and boring the shit out of the crowd.”

Whores stepped into the booth at 10 p.m. The bar was filling out and overflowing onto the dance floor with more than just gangly dudes having acid flashbacks from the Jungle club days. Whether it’s the Whores hype, the distancing from “bro-step” and “filthy bass” or just a misnomer, Grimey is never short on female attendees. By 10:30 p.m. the dance floor was gaining steam with a few girls entertaining each other, but come 11 p.m. to 2 a.m. the floor was a grinding, thrusting hot box of sweaty bodies–sweet, sweet uninhibited decadence.

Whores neither bores the crowd nor himself when he DJs. He keeps a folder of over 10,000 tracks on his computer at all times and does not practice a strict set. “It’s a lot more fun freestyling sets,” he said. “Sometimes when I record the sets and go back to listen to them, it’s like, ‘Man, that mix really worked.’ Others it really didn’t work, but what it comes down to is if you’re a professional, you can treat it like a jazz musician and play out of it. It’s all what you do with an error. Some DJs don’t know how to bounce back, they flop or they panic and that shows. That’s the difference between me and some DJ who took it up two years ago.”

Back outside we resumed our interview session in hopes of a quieter haven, but Grimey is the dance night with just as many attendees milling about the roped-off outdoor smoking section and back parking lot as there will be jammed into the dank of The Toho.

Whores clearly enjoys the popularity of Grimey, but he lamented that its success led to the compromise of his HUMP night on Wednesdays opposite Grimey. Originally called Warpaint Wednesdays with Terra Lopez, Whores came on to assist with the DJing and teach her techniques. Once Lopez began Sister Crayon, she forked over the night to Whores who renamed it HUMP.

“It used to be a popular night,” he said. “When Grimey came around it took the spotlight. I’ve been bringing around a lot of relative and instrumental electronic artists and musicians to try to bring it back.”

It was none of my business, but Whores willingly broke down the financial losses he’s incurred in the past two months that’s led to HUMP’s demise. DJs that are not conveniently touring the West Coast are flown into Sacramento and given hotel accommodations on Whores’ dollar. If no one shows, it means he bites the bullet.

San Francisco electronic artist EPROM and Frite Nite’s Salva, two rising beacons in the West Coast, are booked for HUMP at the Press Club this week. After that it’s the anniversary party with locals only in November, including Dusty Brown’s Little Foxes project, which is quite possibly also HUMP’s night of eulogy.

With Fuck Fridays dissolved, the Toho was in need of a new Friday night event, and Shaun Slaughter was back on the market for work. Rather than compete for the local crown, Whores and Slaughter teamed up to create Heater, an exclusive once-a-month party that combines glitter and gutter. “It’s more like HUMP with an open format,” Whores said. “We can play anything from house to electro to Baltimore to indie to dubstep and bass n’ breaks, whatever. It’s just straight party.”

The party debuted last month with the two DJs performing separately, and then trading off tracks for the last hour. “There’s always been an odd tension between us, but we’ve always been super-friendly with each other. I’ve been super-supportive of his nights and he’s been super-supportive of mine. The odd tension was because it’s a small town and he’s held the crown for quite a while. I think we’d really benefit if we did more stuff together, which is why we’re only doing it as a monthly.”

Our vibrations are in good hands with the Grimey residents. It’s a rare event where making requests is the greatest faux pas. “I don’t think it’s common knowledge that people know it’s rude,” he said. “Believe it or not, I have one job and one job only and that’s keep the vibe going. As soon as I stop to talk to someone and they go into detail about what they want to hear and why they want to hear it, all of a sudden they take me out of the groove I’m in, which takes away from the vibe. The next mix I do will be less involved and the crowd will notice, believe it or not. They won’t necessarily think about it like, ‘That mix sucked,’ but just have a moment to consider going out for a smoke.” Put your trust in Whores, kids. 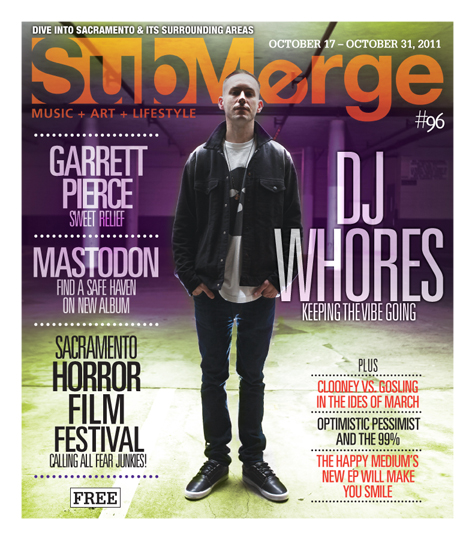 Grimey gets down at the Townhouse every other Tuesday night at 9 p.m. ($10 cover). DJ Whores and Shaun Slaughter’s Heater happens one Friday per month, also at the Townhouse. It’s free to get in before 10 p.m. with an RSVP. You can also catch DJ Whores at the Golden Bear on Saturday nights.