Bring in the New 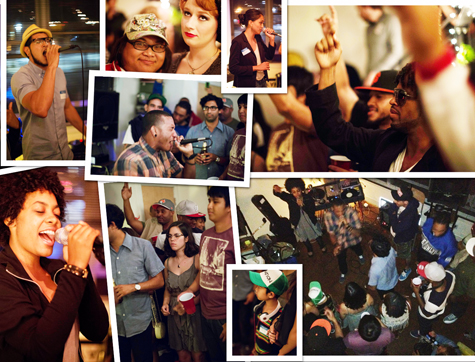 “Play a throwback,” someone yelled from the balcony, to which DLRN rapper 5th Ave coyly responded that tonight wasn’t about that. The loft space behind Naked Lounge on 15th and Q streets was well-beyond fire department approved capacity. Attendees squeezing in on kitchen countertops, staircases, overflowing onto the back patio and leaning over balconies to sought space to see DLRN perform its new record. My thought: Shush, it’s a listening party.

The final record in the DLRN trilogy, Awakenings delivers on the promises made at the end of the previous EP The Bridge. Observe the titles in succession (No More Heroes, The Bridge, Awakenings) to understand DLRN’s intentions over three years. 5th Ave mentioned a clue to be discovered in “The Promise,” during our 2010 interview in Submerge, but it was not until I listened to the track tonight that I unlocked the message in, “Somebody pinch me / Because I ain’t never been so close to my dreams,” as a hint to Awakenings.

To commemorate The Bridge, DLRN threw a party at Beatnik Studios with tequila tasting, free sushi and kegs of Miller High Life. The Awakenings listening party was an intimate, invite-only affair, but those in attendance–dressed to the nines and a gorgeous crowd–were left to their own vices and devices to mix drinks in the kitchen, plunge hands into snack bowls and pilfer beers and sodas from the coolers, all on the house.

A toast is appropriate. DLRN are skilled in the art of party, putting their creative noggins together to give us a good time beyond the release show formula of door charges, security pat-downs and over-priced libations. Three Cheers.

While, it’s faux pas to request a hit at a listening party, it’s excusable since Sacramento rarely throws such events. Among friends though, 5th Ave entertained the request in the name of good vibes, performing “Trill Cosby” and “Dear Langston,” which he apologized for forgetting the words to. It spoke of where DLRN is at these days, looking ahead rather than letting the past carry them. “Dear Langston” has aged well, but Awakenings is ripe.

Post-set I was pulled aside to be interviewed by 5th Ave’s wife Glenda LaMarr’s son on camera. The little man who was in charge of donations (and did a fine job), asked me to sum up the DLRN album in three words, to which I replied, “Moody yet uplifting,” or something to that effect. WhiIe I mingled and tossed back complimentary booze, in the back of my head, I questioned if my quick assessment had merit. The listening party triggered a few reminders from my home sessions, and I hoped I’d spoken with justice to DLRN’s body of work. 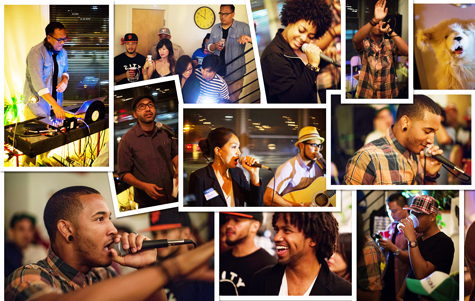 On “Fear and Loathing” (featuring Stevie Nadir), Reyes’ production places noir-electronic-pop synths atop thundering drum breaks, a binding thread heard throughout Awakenings. Malika sings, “We’re living that night life, watch it all fall down,” until Nadir chimes in with, “Everything was beautiful / nothing ever hurt at all,” a reference to either Kurt Vonnegut’s Slaughthouse-Five or Christian rock band Breakfast With Amy’s debut album. Without slipping into goth chambers or inching too close to a reimagining of the Drive Motion Picture Soundtrack, Awakenings is an evening’s quest to greet the soft break of day. The daybreak comes in the album’s closer “Open Letter.” Over an ethereal beat, the vocals are at first chopped and screwed into a boozy grumble, but Iman comes in to lend the clarity, as Reyes’ production begins to rise from a clutter of red cups, blunt ash and streamers.

The album explores universal hang-ups among 20-somethings, the dedication made on “Homecoming,” but at the crux of the record rests a deeply personal song called “Good Company.” While performing “Good Company,” 5th Ave took a moment to make his wife, Glenda, blush front and center while she hugged her son. He got close, making eye contact and smiled at her through his verse. The track, clearly dedicated to her, bears a minor sonic kinship to Outkast’s “SpottieOttieDopealcious” as 5th Ave vibes out on the mic with refrains of, “Let the beat ride,” while Iman croons “baby baby”s to a space age funk track that could extend past the 10-minute mark and not seem indulgent. On “House of Matches,” 5th Ave hands over the keys to Iman and rides shotgun, a humble display for an MC. It speaks to DLRN being truly a group and not just rap bros who let a lady hang out and sing when needed.

Awakenings as an album in a Saturday night listening party environment with free liquor is a difficult sell. Awakenings is apropos for a Saturday night alone, drinking at first out of spite, and then falling deep into the music until you get a 4 a.m. urge to transfer it to your iPod and go for a walk to a vista to greet the sun to the build of “Open Letter.” 5th Ave might have found happiness, might feel closer to bringing his dreams to his waking life than ever before, but he’s not deserting the lost boys and girls. As the group explores label interest and management in Los Angeles, giving the record to Sacramento is DLRN’s first and foremost interest, as it always has been.