DLRN Release the first half of Neon Noir

Shit is about to get weird, folks—Fear and Loathing is about to descend upon Sacramento with a sonic boom reminiscent of the drug-induced adventures shared by a famed Gonzo journalist and his faithful companion.

No, Hunter S. Thompson hasn’t canceled his self-imposed exile from the realm of the living to wreak havoc on our City of Trees; rather, “Fear and Loathing” is the inspiration and title of one of the tracks off the forthcoming release from the hip-hop duo DLRN. And if you’ve checked out the video, a slick and sexy visual experience that includes plenty of booze, a hint of the drug culture that made Thompson so famous and the artists donning animal masks, the inspiration is clearly entrenched in the Gonzo spirit.

“I think, in context of this particular song, the vivid images from Fear and Loathing in Las Vegas, and the really dark, abyss-like backdrop of [Thompson’s] stay there, helped me contextualize my own dark experimenting in that city,” says Sean LaMarr, DLRN’s vocal impresario.

Neon Noir, an LP segmented into two parts (part one of which is set to drop June 3, 2014 on the Waaga Records label with a limited-run cassette tape offering—yes, you heard right, that plastic rectangular mechanism for inducing eargasms—as well as a digital version for all of you who ditched your cassette players when CDs took over the music world), is the continuation of a narrative arc that LaMarr has been developing since the group formed six years ago.

“Neon Noir was a full album that got broken into two albums,” LaMarr explains. “In part because [of] Waaga—their strength is really electronic and electronica music, but they really gravitated toward our songs that were in that vein. So, [there’s an] A side and a B side of the project where one is more electronically charged and the other is more hip-hop.”

Forged in the fires of the electro-synthed-out vibe that seems to be permeating just about every facet of Sacramento’s musical landscape these days, DLRN’s LaMarr and production prodigy Jon Reyes are storytellers in the deepest sense of the word—often taking inspiration from literary legends like Thompson and Kurt Vonnegut.

“We have a great appreciation for the written word. Probably more than the spoken word,” LaMarr explains. “The line in Stevie’s hook [on “Fear and Loathing”] ‘Everything is beautiful and nothing ever hurt at all’ is a Vonnegut reference, too.”

“DLRN is really just a collection of both mine and Sean’s experiences, and our interpretation of what this world is,” Reyes continues. “From the movies we consume to the music we listen to, we put it all back through our art. Really it’s just an incubator of all of our ideas; trying to share with the world how we see things.”

The duo’s love for storytelling is also explored through their videos, the majority of which have been conceptualized and directed by Sami Abdou of Upper Cloud Media. He’s the mastermind behind the videos for the tracks “Dear Langston,” “Reset,” “Good Company” and “Fear and Loathing.”

“We take a lot of time and energy, and you know, really try to give the best product we can—visually and with the music itself,” LaMarr says. “Hopefully they complement each other the right way.”

While Reyes, born and raised in Sacramento, has relocated to the Bay Area, the hip-hop twosome’s love for Sacto is clear—local lyricists and vocalists Young Aundee, Leia Layus, Nami Ramo and Stevie Nader (who is also in the video for “Fear and Loathing”) also make guest appearances on Neon Noir. The visual exploration of their sound also provides a purview into the soul of Sacramento itself. Iconic Sacto landmarks are littered throughout the video for “Dear Langston”—the city’s skyline, and even the Old Ironsides sign, makes a cameo as LaMarr strolls down the grid’s streets, pouring his heart out in song.

“Sacramento—and we both feel this way—is an amazing place to curate and create art,” LaMarr says. “I think some of it is partially out of desperation, being like there’s not, at least when I was coming up, there wasn’t much to do until you were a certain age, so the outlet of creating and making art was paramount [to] my development as a person.”

The duo, who has known each other since high school, began their artistic journey as a part of an art collective that included dancers, spoken-word artists and graffiti writers. And while the collective wasn’t a formal organization, the close-knit group of friends who were collectively exploring their creativity in an interactive and supportive environment served as the catalyst for their current creative endeavors.

“When we first started creating music we were very into what would be considered alternative hip-hop,” Reyes says. “I think just the way music has evolved our sound has to evolve as well. I think with every project, we try to find different ways to put things together. I find I’m most creative when I’m learning new things.”

As LaMarr and Reyes gear up for the album’s release and a June 4 release party at Dive Bar as a part of a South by Southwest-inspired block party on the K Street Mall, their latest exploration of this narrative arc delves into that Gonzo sensibility, but keeps that hip-hop swagger.

“With ‘Fear and Loathing,’ [it’s] the story of me going on a friend’s bachelor party in Vegas and just my interactions with people in those moments, and walking down hallways and those beautiful hotels and feeling super lonely,” LaMarr explains. “It just was a moment when I was like, ‘Wow everybody comes out here on some sort of conquest and at the end of the day [we’re all] just wandering these halls.” 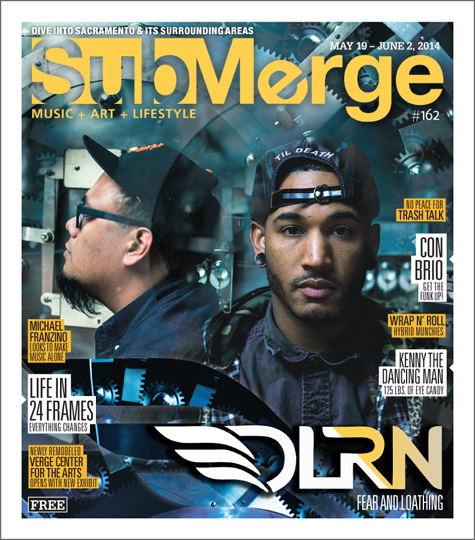