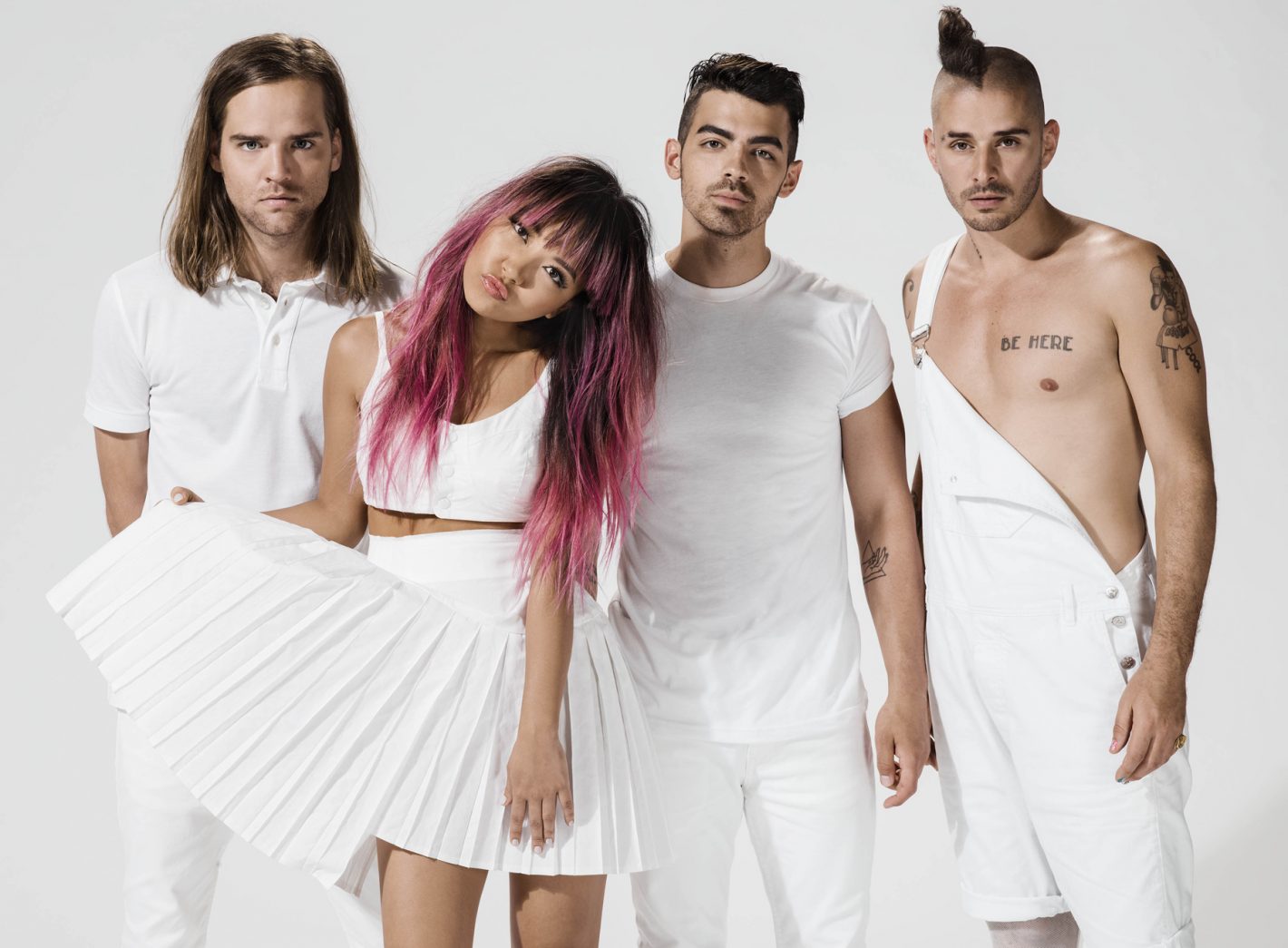 Released in November 2015, this ear worm worked its way through the charts and playlists all the way into the summer 2016. In so many ways it’s the ideal funky anthem to a summer of uncertainty.

Between the winter of ‘15 and the ‘16 election, history seemed directionless, stalled out. Interest rates continued to stagnate and nominal climate agreements were signed. The global events in review seem difficult, mundane at best.

Pure jubilance in excessive display for lack of a reason not to, “Cake by the Ocean” embodied the optimism and naivety looming at the uncertain end of the Obama era. Tomorrow appeared as a continuance of a potentially more hawkish same-difference in the U.S.-led global order. What else was liberal democracy to do? Celebrate!

That jubilance was rudely punctuated by the U.S. election. Everything changed. Politics seemed real again, inaction was class war, pop was either denial and/or riotous anthem.

It’s unclear if JinJoo Lee, DNCE’s stellar Korean guitar player with a star-studded resume, would agree with this description. Yet her life story seems to speak directly to our current moment where bodies are indiscriminately prohibited from traveling between spaces but pop singles circulate the globe instantaneously.

She came to Los Angeles at 19 with a guitar, a dream, and a looming language barrier. A few determined years later, she’s touring the world as one of today’s most recognizable female guitarists.

In the following interview she opens up to Submerge about the importance of friendship, DNCE bassist Cole Whittles and his unique hair cut, Korean street food and working with Nicki Minaj on the set.

When she performs at EndFest on May 14, 2017, at Raley Field, may she guitar-lick us forward into better times or at least a brief escape from the one we’re in. 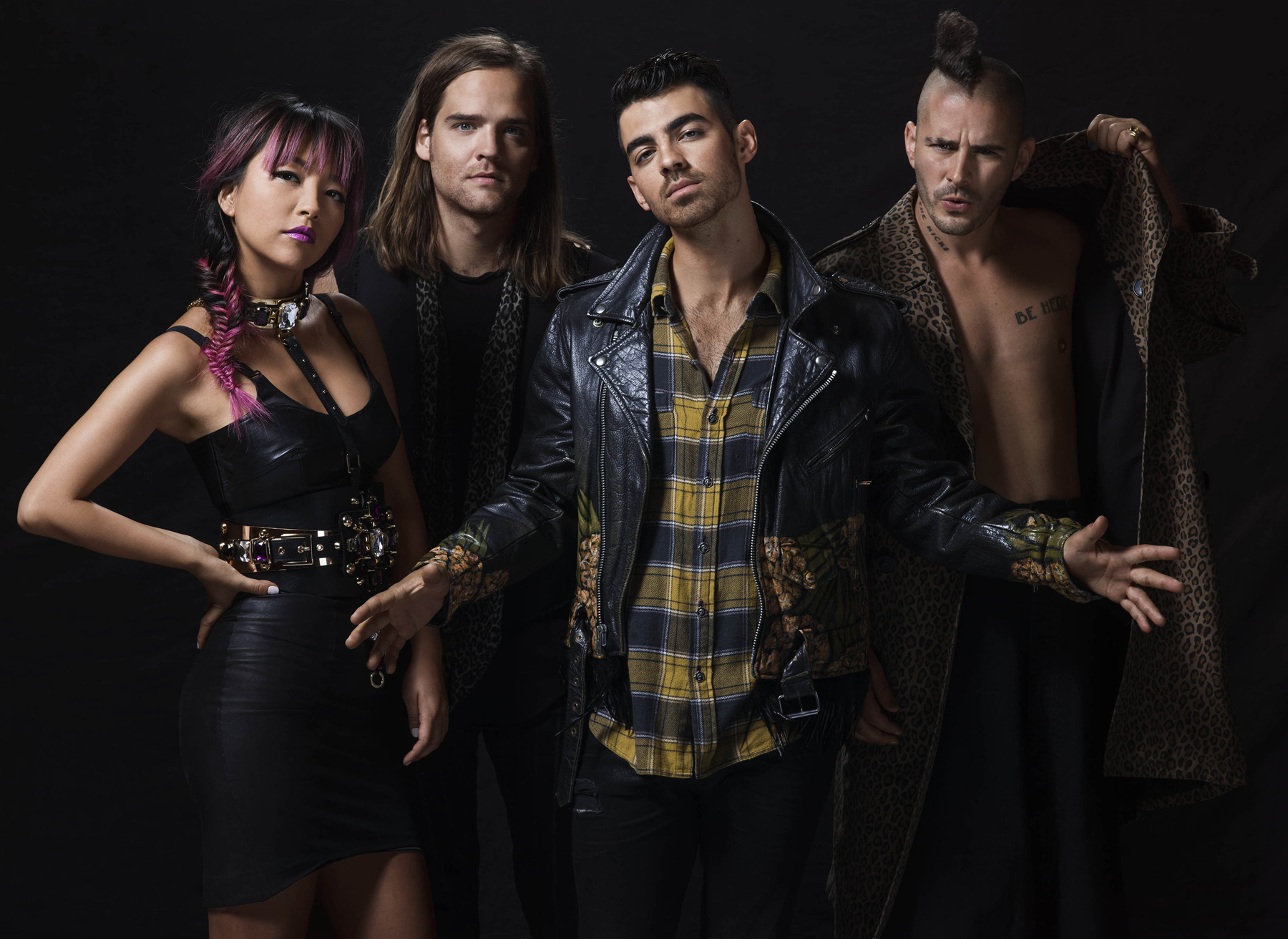 How would you define DNCE’s style?
Funky, fun, unique, different.

What is Cole’s haircut called? Is it a quarter flat top, or an off-set mohawk, or something else that can only be described by being in its divine presence?
It’s called Seaweed in the Desert. It just grows in the desert like that.

So if I googled that, would that come up?
No, but we could work on it. From now on, I think it should be a thing.

I agree. What was the best part of working with Nicki Minaj?
We are definitely fans of hers, and she’s an amazing rapper. As a female artist in this industry, she’s a big influence for me. Having her in our new single [“Kissing Strangers”] and having a good music video with her was amazing.

What did you learn from that experience?
Just having fun and being confident. Do what you do and enjoy it.

She seems like a very big personality. Were you able to experience her just as a person?
She’s really nice. She came to me and the people in our band, and casually we just had a conversation together. It was really fun and comfortable. A casual experience working with her.

What did you learn from her that most people don’t know?
Like I said, the confidence. In hip-hop and rap, she’s like killing it as a female. Not just [as] a female, she’s killing it, period. That’s something that I’m doing too, so I’m connected. She’s like a really good influence for me.

What’s your favorite movie?
I just watched this movie called Hidden Figures. That was really powerful and touching, and it became my favorite movie.

What was the biggest takeaway from that story?
That movie was based on a true story. It was three females back in the day who went into NASA, even though it was a hard circumstance. But they didn’t give up. They kept going and kept going. Push for their dreams. They made it. So it was like really touching.

Are some of those conflicts still with us today?
Definitely.

Was that the highlight of 2015–16 for you?
Like being in a band with best friends, and you know, playing together, traveling together, that’s just the everyday highlight.

Why does the band get along so well together? What makes it so special?
Well, we’ve been friends for a long time. And we have our personalities, like, pretty similar. We’re just big kids. We love music. We’re goofy people. Our personalities blend in really well.

It seems like you get along pretty well. Is one of you more high-strung, or are you all pretty laid back?
We’re all pretty similar people. It helps.

Kudos for using Ashley Graham in the “Toothbrush” video. Did you get to hang out with her? If so what was that like?
She has this power, that wherever she walks into the room, she brings that peace and happiness. She brings the brightness in her. Immediately, when you sit down and talk to her, you become her best friend. And she has this strong personality, that I, really, I’m kinda envious, and I kinda adore. She’s beautiful inside and out. She’s just amazing.

It seems like she’s got that aura, like you’re describing. I imagine everyone around her is smiling. Is that true?
She has that power. I don’t know how to say, attraction. She is amazing, and I’m a big fan of her.

If you weren’t playing guitar and touring, what would you be doing?
Um, nothing. I don’t know. I really wanted to be a rapper when I was young. Maybe that’s why I’m such a fan of Nicki Minaj and so happy that I work with her. I don’t know. Maybe something with animals, something with children.

So did you try writing your own raps as a kid?
No. I could’t do anything. That’s why I adore rappers. I couldn’t do any of that.

So You’re inspired by them because it’s a skill you don’t possess?
Uh-huh. Pretty much.

What inspired you to play guitar?
I always wanted to. I grew up in a family who was all musicians. All my siblings are musicians. I grew up watching them playing together, making music together. I wanted to join the band, and they didn’t have a guitarist at the time. So I picked up the guitar and started learning. I just had this strong connection and found the passion in me that I just … It was meant to be that I play the guitar.

What was it like to leave Korea for Hollywood?
I was miserable. I was so afraid. It was a half and half because at the time I couldn’t speak English, I was very young. I was very nervous. But at the same time I was very excited to [see], like, what is going to happen. You never know what life is gonna be in the near future when you start something new, challenge yourself like that. I didn’t give up. I think that’s why I’m here. I didn’t quit or give up.

How long does it take you to get dressed in the morning?
It depends. It can be 10 minutes, it can be two hours.

EndFest, presented by 106.5 The End, takes place at Raley Field in West Sacramento on May 14, 2017. In addition to DNCE, Halsey, Fifth Harmony, Austin Mahone, Noah Cyrus and Alex Aiono are also performing. For tickets, go to Endonline.com.