Dog Party comes of age on their fourth release

Instead of kickin’ it poolside during the hot Sacramento summers, two sisters gladly choose to be on the road, sharing their music night after night with new audiences.

With 25 states logged over the course of four U.S. tours, Gwendolyn and Lucy Giles of the rock ‘n’ roll duo Dog Party, say a typical evening for them on tour consists of two, sometimes three, sets per night. Still, this pair of die-hard musicians says tour is what they look forward to every year.

The music started as mini-jam sessions in their living room at ages 9 and 11 years old with both chords and lyrics scribbled on paper. As the sisters grew from girls to young women, so did their music. From the debut, self-released album Dog Party in 2009 with its more innocent, yet catchy punk rock attitude, to their Asian Man Records-backed third album Lost Control, Gwen and Lucy continue to evolve their garage and punk rock styles. Now, the sisters look forward to their latest release, Vol. 4, due June 16, 2015, on cassette through Burger Records, and LP and CD through Asian Man.

On the cusp of her 17th birthday, Lucy says she can’t wait for Vol. 4’s album release show at Harlow’s with fellow Burger Records pals Pookie and The Poodlez on June 15, 2015. Gwen, now 19 years old, and away at Cal Poly San Luis Obispo where she majors in graphic communications with a minor in music echoes her sister’s excitement.

“We just took all the good stuff from Lost Control and we made it better,” says Gwen about Vol. 4 during an interview at a recent Dog Party show at 924 Gilman in Berkeley.

Lucy, with her signature bright pink locks and leather jacket adds, “It’s just like real big sounding. The drums are loud, the guitar is super powerful, and we have the third [band] member, Jimmy, our Fuzz War pedal by Death By Audio.”

The two sit in the back of their week-old, Mercedes-Benz Sprinter passenger van. A vehicle the two say will soon gain mileage this summer as Dog Party and Pets plan another U.S. tour. Despite their time spent in more familiar territories, Gwen and Lucy have also traveled overseas to Italy and Berlin alongside Kepi Ghoulie to perform their music and reach new fans.

Still, with dozens of cities and a fair few countries checked off their musical bucket lists, the two have outgrown one thing: the age stigma. They both loathe to be called “cute” or even worse, to be told they’re so talented “for their age.”

Gwen adds, “Teen show is also annoying or, oh you’re so cute. Or, that’s so great that you guys are doing this at such a young age, or you’re so good for your age.”

Lucy continues, “Basically, the last record we put out was really angled that we were young… Our age was put into everything. This record, we’re trying to not include our age as much. It doesn’t matter about anything: age, gender, race anything like that. Where you come from, none of that matters. It’s all about the music.”

On that note, Dog Party hop out of their van and onto the stage to support Burger label mates, Swimmers, at Gilman on a Friday night. The venue is packed. Swarms of music hungry fans, varying in age from 10 to 30-plus, all huddle around the stage as the sisters check their mics and respective instruments.

A bold “NO STAGE DIVING” sign clearly outlaws such live music antics, but once Lucy counts off Dog Party’s first song using her drum sticks, the crowd can’t help but to push and jump to the music and even crowd surf during their performance.

After the song ends, Lucy, from behind her kit says, “All this dancing is fine, but I just want people to be respectful to one another. So, that’s the message I have to say.”

Instantaneously, the sisters dive back into what they came to Berkeley to do: perform.

This night is simply one live performance versus the multiple sets they’re accustomed to, but Dog Party is out to make the most of their weekend. The next day the two were off to San Luis Obispo, Gwen’s new home away from home, to perform alongside Shannon and the Clams.

Since Gwen entered her first year of college, practices are understandably scarce, yet the two still find time to get together and play a few shows throughout the school year despite distance.

“We get along and every now and then there are few times where we squabble,” says Gwen between laughs as Lucy pretends to grow devil horns. “But we’re closer than most.”

Lucy, sans horns, adds, “Yeah, we’re way closer than most siblings. Sometimes, I look at most siblings and I’m like, ‘Whoa, you guys are so far away from each other.’ We get along really easily and we know what we’re thinking. It’s kind of like a psychic thing and we just play really well together. Sometimes, obviously, we get mad at each other because that’s what we do, we’re sistas.”

With Vol. 4’s release weeks away, Gwen and Lucy both agree that they’re eager to perform with more Burger Records bands, which also includes their affinity for Ty Segall. Through their new record partnership, the sisters aim to reach a wider age demographic that also includes the younger crowds. It was eight years ago that the two first picked up a guitar and a pair of drum sticks, now they hope to check off all 50 states and even rock audiences in Japan.

The album’s single, “Peanut Butter Dream,” describes Lucy’s current relationship and how from an outsider’s perspective, the two appear to be a modern-day odd couple.

“You see me, I’m like this little kid with pink hair and leather jacket and he just cruises around in normal clothes,” says Lucy jokingly. “We don’t seem very compatible by just looking at us, but he made me see things differently. [The song’s] really catchy with the ‘Oh’ part and the harmonies, and Gwenny’s shredding guitar solo.”

Although Gwen and Lucy say the songwriting process has changed since the days they lived together, and practices are limited, the two remain professionals, and continue to adapt to growing up as women and as musicians. 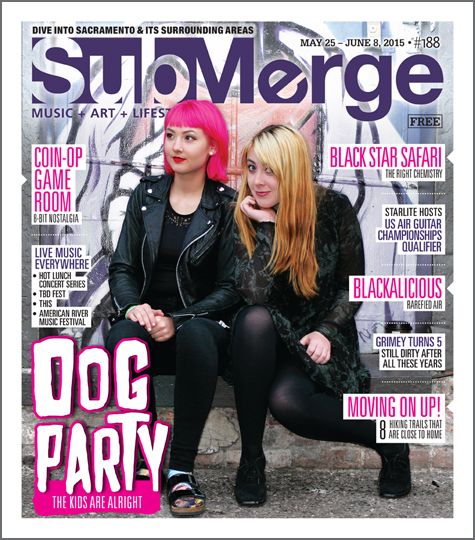 Welcome the Giles girls home when they play Harlow’s in Sacramento on June 15, 2015 with Pookie and The Poodlez. Doors open for this album release party at 6:30 p.m., and tickets are just $8 in advance. They can be purchased through Harlows.com.