Dogfood look toward the release of their latest album and beyond

Dogfood bassist Matthew Harris began doing what countless 15-year-olds set out to do: buy an instrument, practice for hours and start a band with friends with the dream of being the next big thing. After playing in a few bands in his hometown of Sarasota, Fla., Harris met Skyler Michael, who admits to having an interest in singing but felt the need to learn an instrument in order to be taken more seriously. Michael quickly picked up a guitar and eagerly set out to start a punk-influenced group. The two began Dogfood as somewhat of a fun experiment where they’d spend hours in rehearsal spaces spitting raps or angst-ridden tunes into Pro Tools with backing synth drum tracks.

After a few years of getting songs together, Dogfood began playing some shows in their hometown. However, the group soon realized that the cozy, conservative confines of Sarasota were becoming too restrictive. There were strict city codes and limited (if any) venues would allow their brand of music. So Harris and Michael decided to make the bold move of relocating to California in 2008 with every intention of taking their music to the next level, and soon recruited drummer J.T. Reed.

Though an early punk sound can be heard on their debut, Alabama Voodoo, their upcoming sophomore release, Blink of an Eye, is more in the vein of several California-based bands such as The Offspring, Sublime or Red Hot Chili Peppers. Dogfood’s influences surely bleed through in their sound, but in no way can be considered a carbon copy of any of their idols.

Pay no mind to the silly name—Dogfood take their music very seriously, as do their fans and peers. Dogfood will be releasing Blink of an Eye at Ace of Spades on Friday, Aug. 2, 2013. In the following interview, Submerge had the pleasure of discussing the past, present and future of the spirited and savvy group.

How did you start this band?
Matthew Harris: We got our start in Sarasota, Fla., near Tampa. My parents bought me a bass guitar for my 15th birthday. I started playing with some friends for about a year and then met Skyler in high school.
Skyler Michael: They had a band going and I wanted to be in it, but didn’t play any instruments so they wouldn’t let me join. I bought a guitar, learned fast and got good at it and they let me join. We started playing small shows in our hometown but were essentially living in a conservative retirement community. There wasn’t a single venue in town that would allow loud music.

Where did your band name come from?
SM: When we started we were 15 years old, playing punk music and not taking ourselves too seriously. Our conversations would always shift to wondering, what’s the stupidest band name you can think of? We originally chose the name, but when we started getting some recognition, it was too late to go back. We didn’t want to sound too epic or be the “The” band. The only problem with the name is if you were to do an Internet search for our band, but combining it to one word makes us easier to find. We’ve actually had multiple dogs sing along at
our practices.

How did you decide on the move to California?
SM: We knew we had to move out of Sarasota if we were going to continue playing music. California has a lot more to offer for music; more venues and big cities up and down the coast. There’s also more competition, which allows you to test yourself as a band. Sacramento has the small pond thing going on. If you’re halfway decent with talent, you can get a show.
MH: Sacramento is pretty centrally located on the West Coast. Plus, we have a van with a trailer, so we’re able to go down to San Francisco and Los Angeles or up to Portland and Seattle no problem. Growing up, we were very influenced by California bands like Sublime, Red Hot Chili Peppers and Incubus.

What did you do to get established in the Sacramento area?
MH: We recruited J.T. on drums to complete our band. He’s very open to experimenting with new beats and coming up with ideas that outshine what we’d envisioned for a particular song. He had to come in and add his flair to several pre-existing songs. His drum beats accent the vocals very well; he keeps in the pocket and his background as a jazz drummer shines through quite often.
SM: We played our first show at It’s a Grind coffeehouse. But we really got our start at the Powerhouse Pub in Folsom. Andy Hawk took a liking to us and gave us opportunities to play. At the time, there were good walkup crowds because it was free to get in. Later on, he booked us for Concerts in the Park events and helped us with getting on the 98 Rock radio station.

You will be releasing your second full-length album, Blink of an Eye, on Aug. 2. What can listeners expect?
SM: Blink of an Eye has a more expanded sound. This time around we experimented with vocal harmonies, added extra rhythm guitar tracks and spent more time crafting our songs; definitely had more fun making it sound the best we could, whereas our first record Alabama Voodoo was very live and raw.
MH: Sean Stack from Fat Cat Recording Studio produced the new record and was actually trained by Alex Hartig, who worked on production for our first album. Sean has really honed his craft, worked really hard and brought out our true sound. Our writing style has changed from education and experience, but we wanted to put a little of everything we have to offer on this record. No two songs are alike.

Where do you draw inspiration from with your lyrics?
SM: Songs just come to me out of thin air. It could be something as foolish as a quote from a movie that I’ll save to my iPhone or lyrics will be built like a puzzle based on random occurrences. I haven’t taken pen to paper in a few years now. Ideas for me are like little bits of pieces here and there that I’ll glue together like a magazine collage. Sometimes I’ll write autobiographical pieces, other times I’ll write from an outside perspective in the shoes of another person.

Now that your album is completed and soon to be released, do you have plans to tour?
SM: We’ve been really focused in the past year of getting this album out. The thought is always that you’ll get your album complete and released within a couple months, but it seems to take the better part of a year without fail. Now that the record will be out, we do have plans to tour, but want to initially keep within the confines of California. There are so many supportive bands and rabid fans in cities up and down the state that can keep us busy. Plus, we have so much love for the local scene. Ace of Spades and Harlow’s are the better venues in town for us, but we always have so much fun playing at the Press Club and feel at home there.

Will you be doing anything special for your CD release show at Ace of Spades?
MH: The bands alone will make it special. A great mix of artists from several different genres represented at this show. We got to hand-pick the lineup consisting of Element of Soul, Humble Wolf, The Three Way and an acoustic set by James Cavern.
SM: We’re printing out nearly 1,000 CDs of our new album to give out for free to every person who buys a ticket, so that should be incentive enough to attend this show. We’ll also be playing Blink of an Eye from start to finish as well as mixing in some of our favorites. There is also a possibility that members of some of the other acts performing might join us on stage.

What can fans expect from Dogfood in the future?
MH: The plan is to promote the album with shows up and down the West Coast. Also, keep pumping out songs that we like and maybe release an EP of new ideas we’ve been working on along with keeping the love here in Sacramento.
SM: We’re going to keep growing as musicians and focus on making better and better music while having fun and being creative. There’s nothing else I can physically do. We have immersed and invested so much into this that there’s no way we could stop now. 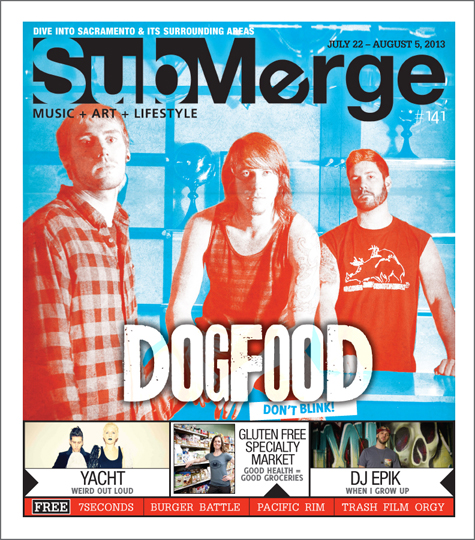