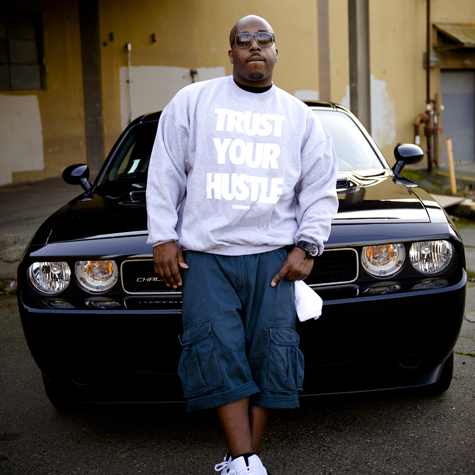 Mean Doe Green (aka Doey Rock) has tasted success, but it hasn’t sated his appetite

It’s a quiet Saturday night in New Era Park. Smack in the middle of this seemingly lifeless block between D and E streets is the firehouse, a distinct two-story brick building with ghostly white faces engraved above the front entry. This is the home of SoundCap Audio, the tracking and mixing studio that has produced albums by some of Sacramento’s top hip-hop artists. I’m here to meet with Sacramento’s veteran MC Mean Doe Green. You may also know him as Doey Rock.

Born Kahallie Oden, Jon Doe was the first moniker Green chose for himself when he started rapping. That soon evolved into Doey Rock. Incidentally he dropped “Mean Doe Green” in a rhyme, and as someone who adopts different personas in his music, he has embraced Mean Doe Green as an alter ego ever since.

“It was a way to reintroduce myself to people,” he later explains. “But I’m never afraid of Doey Rock, because he did a lot for me, too, alter ego-wise.”

Back at SoundCap Audio, engineer Pete Rodriguez answers the door and leads the way past the sound booth to the mixing room. The place is dimly lit and quiet. We shoot the breeze while we wait for Green to arrive. The young kids, some of them as young as 17, are the ones really tearing it up in the local hip-hop scene, he tells me.

Minutes later Green strolls in and makes his way to the black leather couch across from Rodriguez. His voice booms, loud and lucid, but he’s all jokes and smiles. This place is a safe haven for his music, he says, where he feels comfortable enough being himself while recording.

He and Rodriguez have been a team since Green began recording at Sound Cap more than two years ago. Green’s 2010 release Mind Candy Re-wrapped, as well as mixtapes Black Suits and Shovels and Hard Hats and Hand Grenades, both released last July, were recorded here. Now the two are working on the final touches of Shade Proof, Green’s upcoming LP, which is scheduled for release on Feb. 21.

It has been a three- to four-month project that has resulted in a very aggressive, “in-your-face” approach, Green later discloses, which he says will likely make listeners either love or hate him. Teaser tracks “Be Great” and “Thankful” are already posted online, both of which have attracted attention in the hip-hop blogosphere.

Though it features the likes of R&B artists Hello World, Raekwon, Tommy Nova and Arty Fresha, Shade Proof is meant to highlight his capabilities as an MC, front and center, Green says.

“I felt like I should put more of myself [into it], because I think a lot of albums that come out just have too many features,” he explains. “Hip-hop albums these days are just about who you have on the album, as opposed to the artist that’s presenting the album.”

“I’m picky as fuck about my music being played for people,” he says.

But in those tracks alone, which include “Be Great,” Green opens up over grimy beats. And there’s a lot to open up about. He had a neglectful father. He grew up in the hood and has seen his share of “wild shit.” He watched family members fall victim to drug abuse. He watched someone get killed in his driveway.

At the end of the day he’s a street dude, he says. But that’s how he met Raekwon of Wu Tang Clan at age 17, before anyone knew who Wu Tang Clan was. That’s how he got introduced to the game of hip-hop, and he’s been at it ever since.

“I’ve been feeding kids off hip-hop, and I’m proud of that,” he reminds.

Mid-conversation, Green asks Rodriguez to bust out the weed. Rodriguez pulls out a massive nug the length of a pen, and the two get to business rolling a joint.

“Welcome to the city of trees, God dammit,” Green says.

Soon enough they’re getting ripped, and Green is answering my questions with more and more ease. Next thing I know he’s getting stuff off his chest, stuff about the commercialization of hip-hop and about the passion that fuels his songs. The following gives a taste of the conversation.

When do you think [Shade Proof] will be done?
It’ll be out on the 21st, because that’s the date we set, and I don’t have a choice. And when it’s out I’ll be happy with it, because I work well in pressured situations for some odd reason. But I’ve been MCing for so long at this point finding comfort zones is different now, because quite frankly I’m not in the same hunger state that I was in four years ago.

What do you mean?
Yo, MCing is about hunger. This shit was created because people didn’t have shit to do when they was starving and they wanted to put their talents on display. That’s what MCing is about, “I have something to say, hear my voice.” The greatest artists were hungry artists, if you think about whether it’s Tupac and Big, or go back further, Run DMC or Raekwon or Afrika Bambaataa, or whoever. They was starving, not only for attention, but: “Yo, I have a talent to put on display, I have a message. This is my style.” Hip-hop is about your style and your energy as a person. So me doing this for so long, and doing it successfully, you have to find hunger, you have to have a reason. Driven… I have pockets of, “Well I don’t even like rhymes,” because I don’t have shit to say. I done fuckin’ made it to the suburbs. That nigga from Elder Creek? Where I’m living at? Damn! I’m so realistic with my music, I don’t have anything to cry about or complain about, so it’s hard for me to find pockets of hunger. But let an MC think he’s better than me. Those are my driving forces now. It’s different driving forces as a real MC, because I’m not going to write no fabricated shit. I’m not going to rap about binges and mansions and luxuries, this, that and the other. Now I’ve got to find pockets of, “Oh, I feel hungry,” or “Oh, I heard a Chuuwee song, damn that little mothafucka tight! I gotta do that.” But it’s healthy competition, not like I’m hating on him, but that inspires me now.

What were you thinking about when you wrote [“Merlot Murder”]? I felt like there was some anger in that song.
Anger toward hip-hop, right?

Mhmm.
You know what? As much as I felt like I gave to hip-hop, and I tried to stay true to it, I felt like it kind of stabbed me in the back in ways. I feel like it didn’t afford me opportunities that it should have. I don’t know if it was being from Sacramento, I don’t know what it was, but I feel like honestly, as true as I stay to this sport, look at what hip-hop is right now. You got a lot of pop bullshit out, you know, it’s just so watered down.

What’s the ultimate example of watered-down hip hop to you?
When you want a better life for your family and where you come from, I don’t blame people for doing what they do to make money. I guess I’m just so personal with hip-hop that I hate that it comes at the expense of hip-hop. So, watered down to me would be–and it’s a thin line when I say this and it’s a slippery slope–anything that goes commercial to the point that you know what you’re broadcasting is not from the heart. The problem with saying names is you don’t know what their family situation was, and I always am careful about that… See it’s a lot of driving forces as to why we do what we do in this game. The problem is, look what hip-hop has become because of the money and because of the bling-bling era. I guess I would lay the blame there, the bling-bling era of hip-hop fucked it all up. Anytime you give people with nothing a vision of people that didn’t have nothing and now they got something, anytime you broadcast that too much, it becomes, now the people with nothing are rapping about shit they don’t have because they want to look like that. And it just misconstrued every damn thing.

Why do you think you weren’t [rapping about personal stuff] before?
I just wasn’t. I was just on the MC shit, let’s focus on the art and this and that. We’re not going to talk about the street. I didn’t want my gimmick to be street shit or gangsta shit, I don’t claim to be a gangsta in the first place… I’m not doing it for any specific reason. I guess at this point I just feel like I should get it off my chest.

Doey Rock will celebrate the release of Shade Proof (out March 13) on March 16, 2012 at Harlow’s. You can listen and download the the album at Audiomack.com/artist/doey-rock. The show starts at 10 p.m. and will cost $10. To order tickets in advance, go to Harlows.com.