Prepared for Take Off

When your lead singer’s vocal prowess has been compared to the soulful coos that poured forth from the lips of Janis Joplin, images of drunken antics on stage and boozy tantrums typically follow.

Sure, Drop Dead Red’s vocalist, Carly DuHain, has been known to hold her own when it comes to handling a bottle of Jameson and has trudged through her fair share of tragedy and triumph, but for the band, which fluctuates between five and eight members—depending on who is available, according to DuHain—the comparison is a compliment and not cause for an intervention.

“Singing [is something that] I’ve really liked to do since I was a kid—and my parents were church-goers, so we had some big, beautiful voices in the choir and I was like, ‘The easiest way to make church not boring is to sing in it.” DuHain explains of the spark that ignited her singing career. “[Otherwise] that shit was b-o-r-i-n-g.”

In fact, if you witnessed the rock- and blues-infused troupe’s performance at the kickoff of the 2015 Concerts in the Park music series on May 1 or saw them snag the Jack Daniel’s Battle of the Band’s top prize at Pour House later that night, you’d know that the group, which includes DuHain, Tony Ledesma on drums, guitarists Gabriel Aiello and Brittany Vanessa, and Joseph Castro on bass, has taken the spark that burned brightly in DuHain all of those years ago and ignited it into a fiery explosion of heady, emotional music.

Recently, Submerge caught up with the band before their set at Concerts in the Park to talk inspiration, success and what lies ahead for the band.

“We are elated. We’re great friends and admirers of some of the bands playing this year,” DuHain says of being a part of the Concerts in the Park opener.

With their second album—a three-year journey that brought with it a new band name (Drop Dead Red sprouted from the seeds planted in 2011 in the Carly DuHain Band) and new band members Castro and Vanessa—the core of InsideFires is the sonic fruit born out of a collective approach to making music.

“It’s largely our five-part dynamic with the five main [members],” DuHain explains. “Normally if I’m not writing [the lyrics], Gabe and I are writing them. We’re working with a lot of Gabe’s writing right now. Joe comes up with all of the bass structure pretty much on his own. Everybody comes to the table and develops [their respective sections] themselves, and we just have a general consensus of, ‘Hey, I really like this,’ or, ‘Nah, that wasn’t my cup of tea.’”

After the band’s new album dropped in March at its album release party at Harlow’s, attention from local, mainstream media outlets soon followed: the core five players laid down an acoustic version of the tune “Naughty Mosquito” live on Fox40’s morning program and shortly thereafter was featured in an article in the Sacramento Bee for lending their musical chops to this year’s Concerts in the Park series launch.

“It’s funny because I started so long ago that I feel that it’s almost belated,” DuHain says of the band’s recent upward trajectory and notoriety. “That’s just the weird part of me that goes, ‘Damn, you’ve been at this a long time and it’s just now [taking off]?’ But I wouldn’t have wanted this to happen back then. Right now I’ve got the people I want to be around, I have the right support, [and] it’s a healthier environment on the whole. So it feels amazing. It is overwhelming and it’s intimidating, but it’s exactly what we’ve been working so hard to do, which was make a name, be recognized and play and make new friends and new fans.”

And it’s Drop Dead Red’s legions of fans, both new and old, that earned them the win at Battle of the Bands (the champion was selected based solely on the roaring crowd’s approval).

Indeed, taking top honors at Battle of the Bands brings with it not only serious bragging rights but mad booty, well, to boot—the prize purse includes the much-needed necessities any up-and-coming band needs to make it: a shopping spree at Skip’s Music to furnish the musical outfit with working gear, a bright and shiny website for building the band’s brand, not to mention some cold hard cash to help fund an upcoming tour and merch booth. Oh, and joining the ranks as a Jack Daniel’s featured band is nothing to sneeze at either.

A credit to their talent and tenacity, the band also secured a nod to headline the upcoming First Festival in West Sacramento’s River Walk Park on May 23, 2015, when three stages will play host to 18 bands, a selection from SactoMoFo’s roving food truck caravan as well as the requisite festival accoutrement of henna and face painting, vendors, fashion, art and booze. 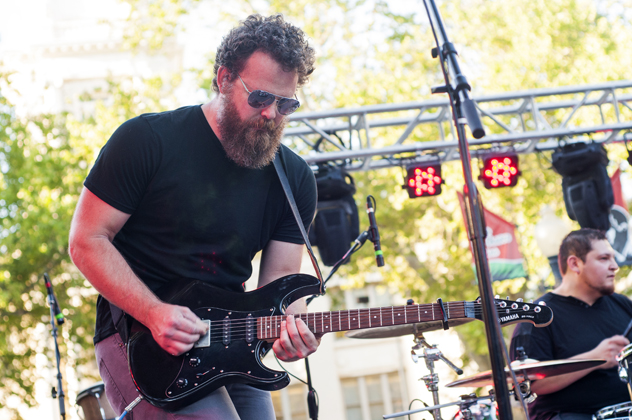 “First Festival is next, this is a big deal,” Vanessa says. “This is big for me because I’m the newest member—this is the biggest thing I’ve ever done with any band regarding music, so this is huge for me. My stomach is in knots, but it’s also like happy knots—knots with butterflies. We’re a part of the opening day for First Festival and it’s a new thing, so hopefully this will happen annually and we’re invited back.”

Another measure of their extensive fan base are the fruits garnered from a recent Kickstarter campaign to help fund the completion of InsideFires.

“Financial things always happen and at that time I was dealing with trying to keep my kitty alive and so we decided to do a Kickstarter,” DuHain recounts. “And we came up with a low goal, it wasn’t what we needed but it was something that could really get the ball rolling. So once I fleshed out a plan, $2,500 was the minimum and we hit it—we hit it with nine days to spare. I couldn’t believe it.”

Now that their sophomore effort has finally emerged from the depths of the bitterness of life experiences—loss, heartbreak and physical and emotional demons—the bandmates look back on the recording process at Twilight Recording Studios, under the guidance of engineer Traver Siciliani, fondly.

“The recording process took over a year—because of financial things, life, you know, [and] us being in so many different bands,” DuHain admits. “It was a labor of love. Out of the original songs, only five that we were going to go with made it on the album.”

For DuHain, a self-identified recluse who emerges from her cocoon to perform her emotionally charged lyrics, it’s the love and support from her bandmates that inspires her.

“She has all the tools to do the job,” Castro says.

While DuHain has the tools she admits that realizing her musical dreams isn’t without its pitfalls—especially when her body refuses to cooperate.

“I’ve got pretty severe lupus and arthritis, so it’s hard for me to consistently play,” DuHain says. “Our best gig was the worst gig. We were playing Blue Lamp [and] I had a lupus [flare-up]—when a flare-up happens it hits you hard and you are on the ground, you have no hope and I got to that point. It was right before the set. We were headlining, I was sitting out in the car just not able to move, so we had a quick band pow-wow and everybody was kind of really emotional, we were terrified, [but] we started playing and my adrenaline kicked in, we got through the whole thing—everybody was so supportive.” 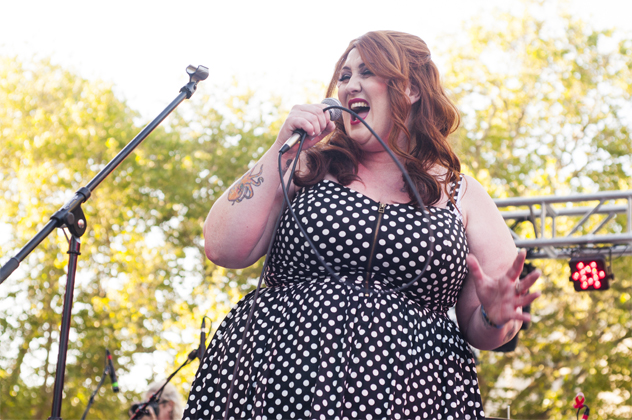 With a Concerts in the Park gig under their collective belt, the release of their second album and First Festival looming ahead, Drop Dead Red is looking forward to taking its brand of blues-infused rock ‘n’ roll on the road with a tour starting in August. But it’s the bond between its members that keep the band moving forward.

“It was intense and we were nervous the whole night about what might happen and we were all right there ready to catch her if she fell,” Aiello says of that night at Blue Lamp. “That’s the bottom line, we’re a musical family. We get in arguments, we have our quarrels but we love each other so much, and I think that it’s evident in the sound that we produce.”

If you missed Drop Dead Red at the Concerts in the Park kick-off show, don’t fret. You can see them, and a lot of other great local bands, at the First Festival in West Sacramento on May 23, 2015, at River Walk Park. The all-day concert runs from noon to 10 p.m., and tickets are $15 in advance. For a full lineup and to purchase tickets, go to Firstfestivalsacramento.com. 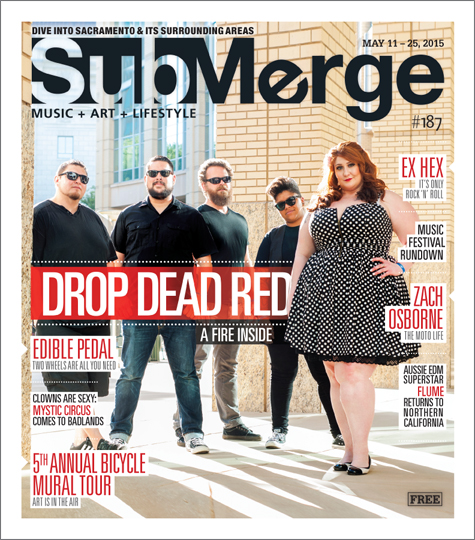