Up, Up And Away

If Early States ought to have been intimidated by the traditionally aggressive cauldron of hardcore and metal bands bubbling out of the greater Sacramento area, they seem not to have noticed. In fact, they seem downright indifferent to the fabled demographic of their immediate proximity; a place where bands like Tera Melos shattered the glass ceilings of post-punk with dizzying mathematical permutations and broken instruments; a place where spatial metal heavyweights Deftones and Far ignited the tinder of disenfranchised Central Valley denizens and went knock, knock, knockin’ on Billboard‘s door; a place where the sheer strip-mallian essence floats so pungently in the humid troposphere, you’re damn near required to bleed Orange Julius should you be so unfortunate as to be shanked in the citywide food court. It’s this kind of focused apathy that seems to be setting the band apart from its peers in the local music scene, and it’s definitely getting it noticed outside of it as well.

Early States is fronted by 18-year-old Zack Gray. His affluence in songwriting has yielded the band (also including Shaun O’Brien, 20, on guitar and keyboard; Brandon Lee, 22, on drums; with recent additions Tom Hatch, 18, on bass; and Nick Silva, 18, on lead guitar) a fluffy bed of uber-pop melodicism and expansive indie-rock pomp.

“We weren’t apprehensive,” says Gray with regard to the divisiveness of the band’s sound. “If anything we looked forward to introducing people to something new. We want to be one of the bands that takes [the scene] in a new direction.”

While the band boasts an average age of 19, their focus remains steadfastly on the progression of their still fledgling career. Having just finished recording their debut EP Powerlines, Early States is forging ahead with not only their CD release show at Club Retro, but also with the spoils of their headway with major Los Angeles-based music licensing firm Immediate Music. The band was recently signed a licensing contract with the company, who is responsible for the composing and licensing of music cues and pieces for television and in the promotional campaigns of 70 to 80 percent of the top 50 highest-grossing films seeping out of Hollywood’s glistening underbelly, including the entire Harry Potter series, the Pirates of the Caribbean franchise and even Ã‚Â­Spider-man. Not a bad spot to be for a band that only formed about a year ago.

“Being the first band to sign with Immediate Music hasn’t changed our direction. It has only made us more driven and ambitious,” notes Gray. “We’re honored that a company as prestigious as I.M. wants to work with us. It’s definitely some great validation.”

The band is planning on shopping their music to proper record labels come January 2009, and figures to utilize the time in the interim to “tighten up any loose screws” and to focus on the release of their EP.

Powerlines was officially release at the Nov. 21 CD release show, but the album hit Purevolume a week prior for free (with the band on the front page), and has made its way on over to music Mecca iTunes, then Amazon, then to basically wherever music is sold on the wild wild Web. Additionally, the band has acquired an endorsement from Dickies clothing.

“Our band is our number one priority and we look forward to being able to give it our full, undivided attention,” explains Gray. And the drive with which he’s espoused his songwriting couldn’t cut closer to the quick of the proverbial angst-loaded post-grad.

Powerlines ushers in atmospheric nodes in all the right places, begging here and there for a unique thread to tether, but still maintains an unmistakable knack for hook-y transitions and guitar-smothered verve. Gray’s adolescent renderings of universal themes such as “love and conflict, to wanting to get away, to finding happiness in yourself instead of looking for it in other people,” while prudent, don’t belie the vastness of his visionary palate.

“Although those are the main themes that can be found on Powerlines, I really enjoy listening to people’s interpretations of what they think the songs are about and how they relate them to their own life,” says Gray.

Early States are hoping to tour in Spring 2009, but will be working on new material and playing local and regional venues to begin the arduous task of getting their name plastered in the fertile minds of show goers; more importantly, the quintet has already eschewed the reticence of the young band syndrome, and expects nothing but great things in the future.

“We believe that we’re a very hard working band, especially for our age,” says Gray. “We think we share the same focus as the bands we look up to and aspire to be like.” 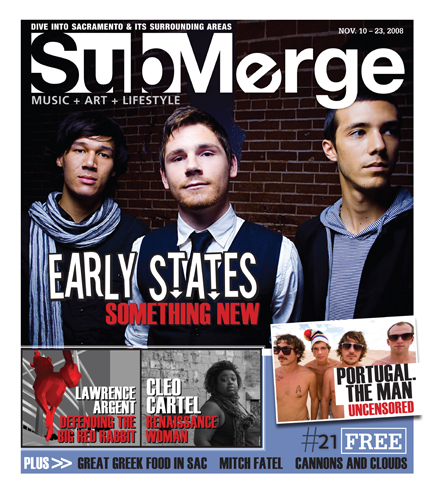