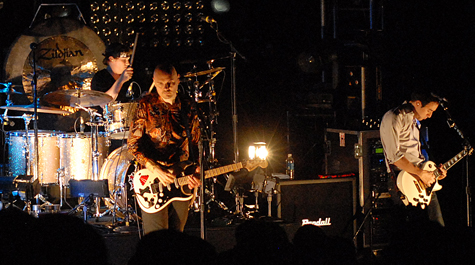 At 7:30 p.m. the corner of 10th and K streets was littered with hundreds of Smashing Pumpkins fans waiting in line to see Billy Corgan and crew in one of Sacramento’s most beautiful venues, the historic Crest Theatre. As fans poured into the building (and especially into the beer garden), Chicago’s Bad City attempted to get the crowd ignited with their ‘80s hair-metal influenced tunes. SPIN.com called them “a modern day Whitesnake,” and I’d say that’s a pretty spot-on description.

At 9:01 p.m. the lights dimmed and the crowd roared as Corgan and his current lineup, which includes 20-year-old drumming prodigy Mike Byrne, lead guitarist Jeff Schroeder and bassist Nicole Fiorentino, took the stage. The first song they dove into was “Astral Planes,” a newer song from Teargarden by Kaleidyscope, where Corgan sings “Everyone gather, warm your soul,” on top of a grungy, slightly Fuguzi-esque guitar riff. Indeed, everyone had gathered; and rest assured our souls were warming, as did the energy in the room. The song “1979” off the nine-times-platinum album Mellon Collie and the Infinite Sadness had the crowd reciting every lyric back at Corgan, as did songs like “Bullet with Butterfly Wings,” and “Tonight, Tonight,” which sounded fantastic despite the apparent lack of a string section like on the original recording. In the same manner, the song “Eye,” released on the Lost Highway soundtrack in 1996, which is very electronica, translated great into this guitar-driven performance with live drums. Speaking of drums, it needs to be noted that Byrne was an absolute beast all night and at one point soloed for a solid four minutes onstage by himself and left any drummers in the crowd wanting to quit immediately.

At one point about midway through the show, an acoustic guitar was brought out for a change of pace. Corgan even played ukulele on one song. With the change in pace came the first real crowd interaction on Corgan’s behalf. He mentioned how in his hotel room there was a copy of Sactown Magazine. “Sactown!” Corgan yelled. “Isn’t that what they call it?” He poked fun at the term “Sactown” a little more and muttered that maybe it wasn’t a good term to use if our town was looking to attract tourists. People laughed. He also thanked those in the front row who were smoking pot. People laughed more. It was refreshing to see Corgan, now 43 years old, having a little fun with the crowd. After an epic encore, the band left the stage to screeching feedback, waving to the crowd while throwing picks and drumsticks along the way.

At 11 p.m. the crowd was pouring out of the theater, electrified. Every one of us knew we had witnessed something special, something to brag about. It’s not every day Billy Corgan is in town.