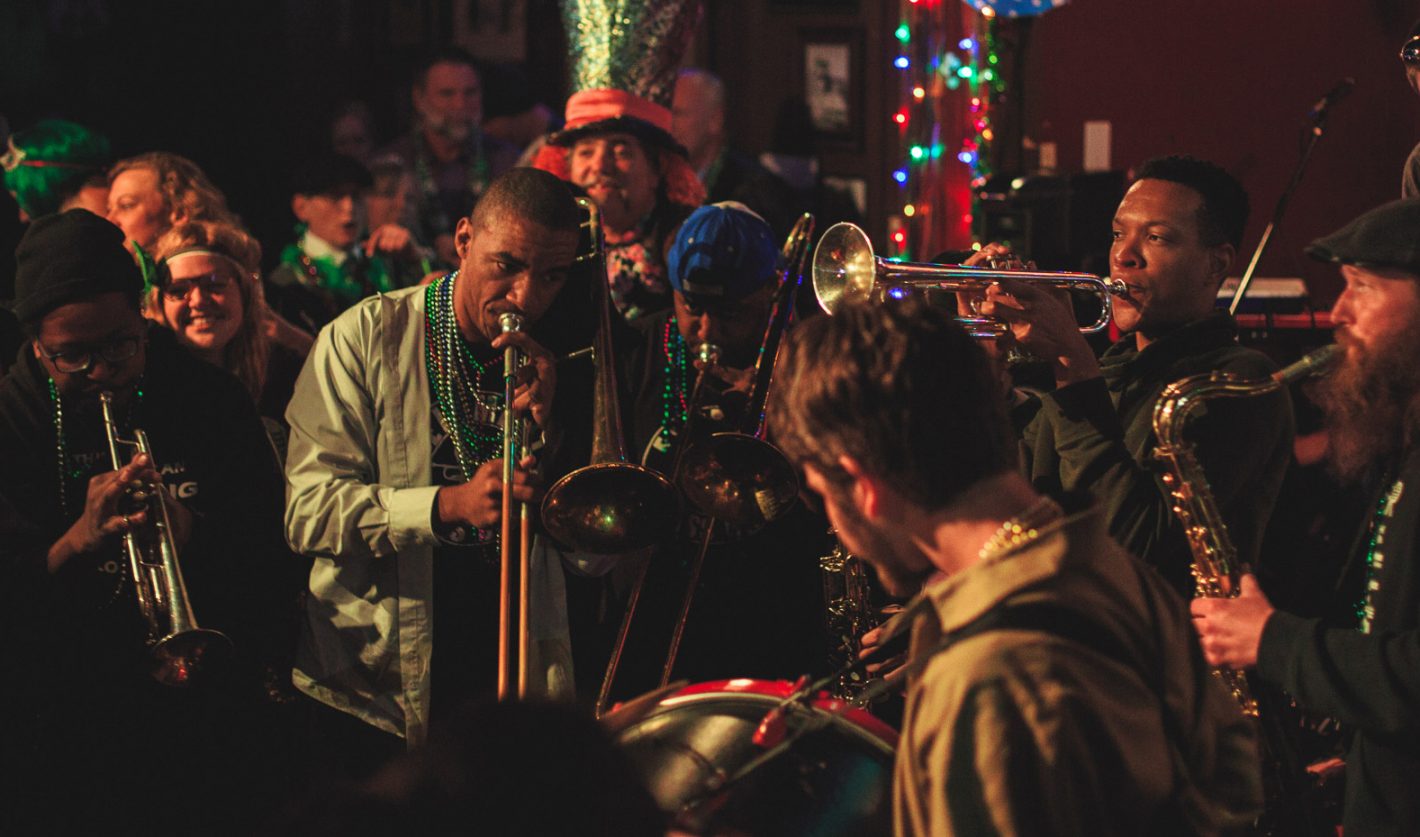 Rooted in West African tradition, second line music encourages expression and improvisation. Originating from burial ritual, funeral goers of New Orleans had their own unique way of mourning—marching and singing.

“They would parade down to the gravesite with the body in a slow, solemn march, to lay the body down to rest,” says Byron Colborn, band leader and baritone saxophone player for Element Brass Band, or EBB as they like to hype themselves.

After the procession, funeral marchers would celebrate the deceased’s life and discuss the personal obstacles they’d battled, thus a NOLA funeral showcased a full spectrum of somber music, combined with high-energy partying.

“This was a long-standing tradition that helped develop the second line tradition,” recounts Colborn. 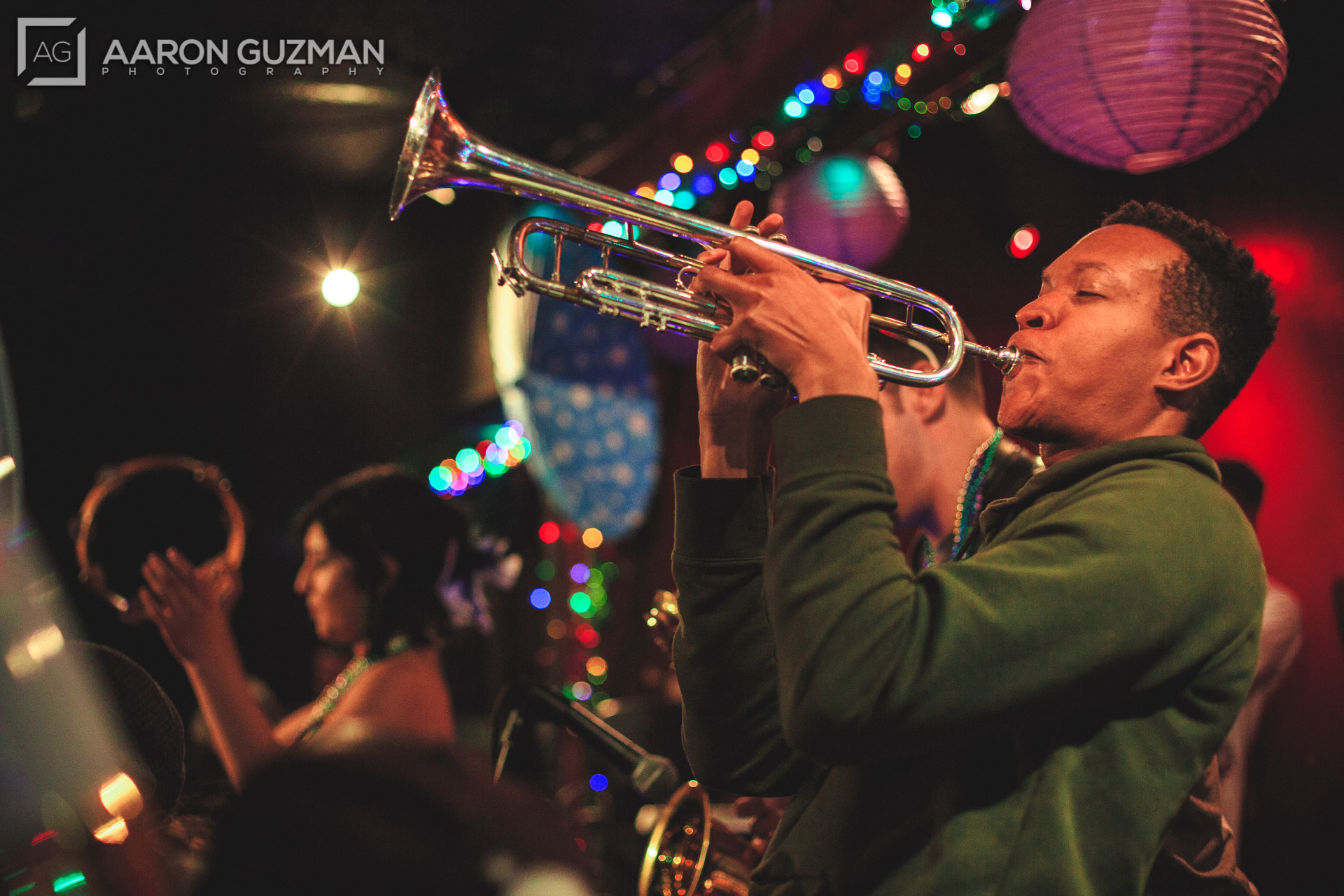 If you’ve ever visited New Orleans, you’re well-acquainted with the brazen energy of improvisational jazz permeating the air, as bands march the streets revving up the people. Usually what you’re seeing in New Orleans are bands-for-hire. It could be a celebration, a birthday, or any kind of event.

“The band goes first down the road, and they’re so loud that you can’t help but hear them, and then the people that follow behind are called the second line. The band is the first line, and the people are the second line,” explains Colborn.

So the crowd is really a part of the band. Collaboration between players and audience is integral to this music style, both in the streets and onstage. Often the body movements that people choose to express also evolved from West African dancing and funeral marches.

“Whenever possible, we try to parade into the club, while Dan banters, and leverages call-and-response, to get the crowd going,” says Au, who began playing with the band in 2012 following grad school, and joined his brother, Brandon, one of the original members.

Dan Smith, their MC, describes the euphoric feeling of engaging a crowd with this music style as a positive feedback loop, and feeling the spirit of the music through the surrounding people.

Yet Element Brass Band is unique from traditional second line music with its infusion of hip-hop.

“Hip-hop is something that’s always been around in our music, especially if you grew up listening to West Coast hip-hop—you can hear a lot of that infused into our music … You wouldn’t really know unless you’re paying attention, like, ‘Did Dr. Dre just come up in that song?’” says Colborn.

When Byron Colborn first joined Element Brass Band, it was about six months in the making, and he replaced the tenor saxophone player who preceded him as a member. Going into their seventh year, Colborn became the band leader because the torch was passed to him. Trumpet player Ryan Robertson, early band leader, moved away to pursue a music career in New Orleans, and Anthony Coleman, also a previous band leader, moved away at the time to pursue academic endeavors. Coleman has since moved to New Orleans, too. They both wanted the band to continue, thus Colborn stepped in to swoop the reigns.

That’s a lot of players to manage. 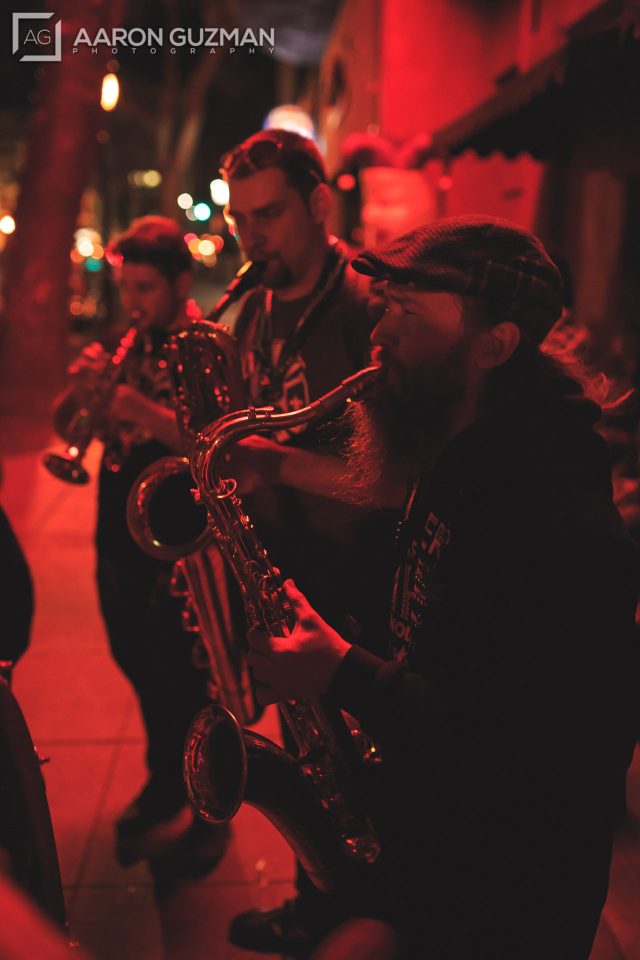 “Leading this band is one of the biggest tasks I’ve ever had as a musician,” says Colborn . “Our band is kind of like a rotating blob. We have a lot of core musicians that stay with us most often, and we some of the best musicians in Sacramento, and California for that matter, who are in very high demand. So in order to play with musicians of that caliber, you can’t expect the same five to seven people to be there every time. You have to be willing to roll with that. It takes a lot of coordinating. And not to belittle people or anything, but a lot of patting people on the back to let them know that they’re appreciated.”

“We all feel like kids waiting for that call, for that gig,” says Smith.

One gig that stands out is the sold out show that they played at the legendary Fillmore in San Francisco, at which they accompanied the California Honey Drops. During intermission, in an effort to keep the vibe going while the headliner took a break, they went down into the crowd with a huge spotlight on them. The energy of the crowd went absolutely wild in the best way with this unexpected “intermission.”

Another gig at Starline Social Club in Oakland, with MJ’s Brass Boppers, was a friendly fight concert that mimicked a battle of the bands.

“That’s the first time we really got into something like what they do in New Orleans,” says Colborn. The bands will be doing their second lines, and sometimes they’ll just come around a corner, and there’s another band. But it’s not an aggressive thing, it’s like, let’s do a musical battle right here. And they respectfully take turns, little snippets. And you get it sizzling, and then the next band goes. So we did that with the Brass Boppers, and it was not just us playing for tips on the corner, this was us playing like they do in New Orleans.”

EBB have got a lot of impressive performances under their belts. They played the March of Science, the Women’s March and Concerts in the Park two years running, where they brought 18 to 20 people onstage as a rare outpouring of EBB members. They founded the first annual Mardi Gras parade in Sacramento with help from the Torch Club (904 15th St.) and other venues. Now in its fifth year, this year’s parade takes place starting at Mulvaney’s B&L (1215 19th St.) on Fat Tuesday. Each year, it has increased in popularity. They also once produced an ongoing concert series called Flow at Assembly Music Hall, in partnership with Jay Siren and Andru Defeye. They also recently collaborated with Defeye, a local poet and activist, for a performance at Crocker Art Museum.

Music is the heart and soul of New Orleans, and second line music is one of its biggest unique contributions to the international music scene. It relies on gang vocals, escalating horns, a fun French influence, flirtatious percussion, crowd collaboration and melody to produce its characteristic mischievous and uplifting sound. It sounds so sweet you can almost taste the beignets.

EBB’s upcoming, free, album release party for their second LP, Cali Got a Brass Band, takes place on Feb. 13, 2018, following the Fat Tuesday parade, at Shady Lady (1409 R St.). The new record features cover art by Sacramento artist Shaun Burner. Vinyl copies will be available at local record stores soon, at which time there will be a separate vinyl release party. In the meantime, you can score the LP online via digital download.

This is a really big deal for the band, as their last album came out six years back, and this one is all original music, recorded with Clubhouse Studios. Burner’s cover art blends a New Orleans color palette and symbology with Sacramento and California archetypes.

Ladies, they marched with us. Let’s march with them. The parade starts at Mulvaney’s at 4:30 p.m., and ends at the Torch Club. The Shady Lady album release starts at 9 p.m. Bring your costumes, beads, feathers and good cheer.

The band is also planning a summer tour to promote their album release. They’ve got a great fan base in Sacramento and they’re ready to take their show on the road.

“It’s not just about getting paid,” says Colborn, “it’s about community. When we lift people up, it makes the music rise higher.”

And no matter where you live, that’s an idea we can all get behind. 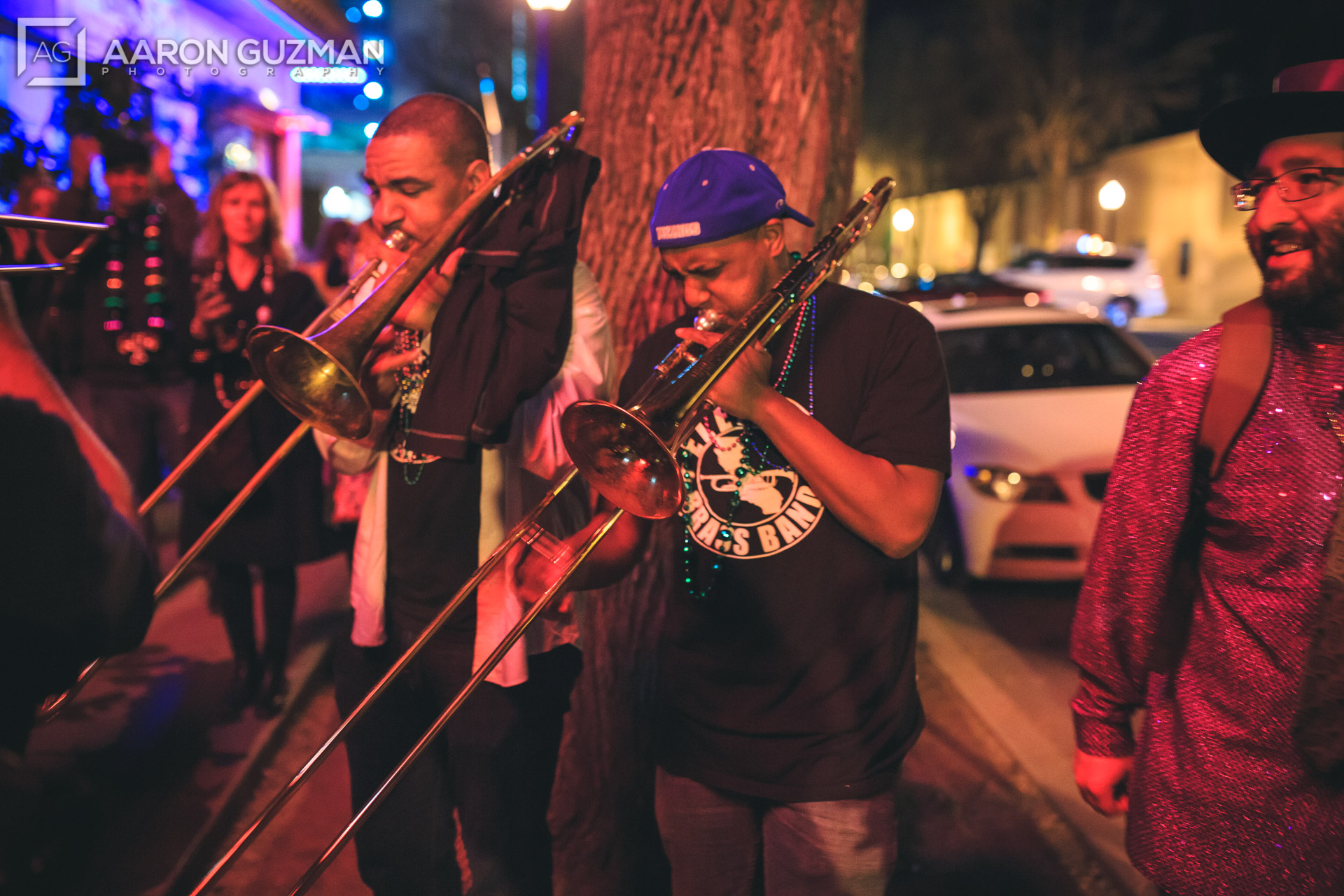 March on down to Shady Lady (1409 R St., Sacramento) to celebrate the release of Element Brass Band’s brand new album on Tuesday, Feb. 13, 2018. While you’re at it, you might as well make a day of it and pre-game with the band at the annual Mardi Gras parade beginning at 4:30 p.m. at Mulvaney’s B&L (1215 19th St., Sacramento). All ages are welcome to the parade.