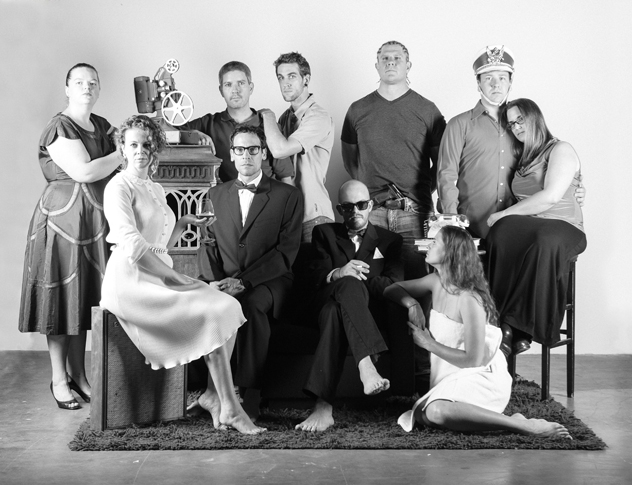 If you think that the modern universe of pop music is composed of a homogeneous parade of sexed-up, music-industry drones, you’re probably not alone. Like an army of tongue-wagging, good-girls-gone-bad, some artists seem intent on pushing the boundaries of popular music to the brink of triviality.

For Elijah Jenkins and Jason Bove, the two members of Eli and the Sound Cult, their allegiance to the ethos of pop just might save the genre from a scourge of banality, just as long as it doesn’t interfere with their other shared passions: skateboarding, rock climbing and bread-and-butter pickles.

Drawing on a variety of sonic influences from Prince to Ween, the band’s debut album Best of Pop is an opus of sound that marries rock, soul and, of course, pop music.

“It’s kind of an amalgamation of all that stuff that we grew up listening to.” Bove says. “That spanned punk rock to metal to radio music to everything that inspired us as kids, you know, skateboarding culture and music culture.”

The two Sacramento transplants—Bove hails from Illinois and Jenkins is from Bakersfield, Calif.—realized after a chance meeting at Sacramento Pipeworks Climbing and Fitness gym that their combined talents and shared interests made for the perfect pop experiment. However, the duo isn’t looking to forge new musical trails, but rather to put out an album that provides their audience a visceral and engaging musical experience that celebrates the pop ilk.

As a genre, pop music is exceedingly broad-based, often assimilating elements from other genres like hip-hop, dance, rock and indie, featuring accessible songs written in the verse-chorus-verse construct awash with melodic tunes and catchy hooks, and Best of Pop delivers exactly that.

“I think we push boundaries insomuch as we feel like it’s OK on one album to write a funk song, and an indie song, and a blues song, and a rock song,” Jenkins continues. “But we’re not trying to push genre lines, we’re just trying to say you can do whatever you want, you don’t have to be genre-specific in your music.”

“I go back to Prince as a good example,” Bove adds. “He’s pop music, but he’s not limited by pop music. That guy can do whatever he wants, so we kind of want to do whatever we want.”

Like a lot of pop music, much of the album’s inspiration draws from facet of the human condition: Love.

“We’re all chasing around boys or girls. I mean, I think that’s a large part of the pop element, too,” Jenkins says. “There’re no songs on this album that aren’t love songs, and they’re either [about] running toward it, running away from it or struggling with it. The fact that we wrote an album that’s eight love songs about five different women should be indicative of something.”

“Well, a lot of it, too, is love lost, right?” Bove adds. “We’ve all kind of been through relationships that haven’t worked but that have brought you to a different space in life. And then it’s trying to figure out why you’re in that space, and it’s because of your choices and your path. I wouldn’t be in Sacramento if it wasn’t for relationships.”

Continuing on this lyrical path, having recently concluded a successful Kickstarter campaign that helped the duo procure a van to take their pop party out on the road and preparing for an upcoming tour that kicks off with an album release party on Oct. 18 at Sacramento Space, Jenkins and Bove are already looking toward the future, without being bound by the trappings of their work.

“We’ve already started talking about the next project, which will involve us throwing everything out in a very Ween style…throwing the entire aesthetic out and going, ‘OK we’re going to create something totally new,’” Jenkins explains. “Then we’ll throw that out, then do whatever we want to do next, but I’ve always wanted to be in a band where we don’t feel pressure to play old stuff.”

Part of the band’s current aesthetic involves an engrossing live show that incorporates multi-media elements, including dynamic light installations and projected images drawing from popular culture figures syncopating in time with the beats emanating from their speakers.

“This movement is closer to a high-energy art installation,” Jenkins says. “That’s really the only sense where I feel like we’re pushing boundaries, this is an art piece, this is not a jazz ensemble.”

The duo’s genuine esteem for one another is evident, from their quip-y offstage banter to their keen ability to synthesize a singular message onstage and in the studio. Their meticulously crafted shows, like their music, is a catalyst for sparking a combustible reaction that explodes through the audience like a volcanic eruption.

“We want people to have a weird, amazing experience and walk away feeling a little changed. I want them to come away with the idea that they’ve been to a show that was well-choreographed, that was made to make them feel something emotional,” Jenkins says. “I want people to walk away with an emotional experience, where they feel like something has been added or taken away from them.”

“I’ve definitely seen people with their mouths hanging open like they were watching somebody be killed or something they didn’t expect to see,” Bove adds.

From skateboarding around town to scaling craggy peaks, on and off tour, their personalities complement rather than collide—as the frontman and singer, Jenkins’ vociferous nature is engaging and jovial while Bove’s quiet, introspective reserve reverberates perfectly in time as softly caresses the strings on his bass.

“I think we like the constraints of having to work within what two people can do. Essentially we have eight limbs that we can work with and that’s it,” Jenkins explains. “But the nice thing is that we only have to deal with two people’s egos, two people’s schedules, two people’s desires, and we get along. Like, I’ve never been in a band where everybody gets along. We butt heads plenty of times on vision and all that, but neither one of us are purists. We never go, ‘It has to be this way.’”

The twosome’s frenetic energy, undeniable bond and surging creativity is the perfect recipe for musical harmony, but it’s their boyish charm and quirky sensibility that may find their empire expanding into Vlasic’s territory.

“Pickles are fantastic. I might start pickling everything,” Jenkins beams. “Apparently you can pickle grapes; red wine vinegar, Sriracha and grapes. I had them at Total Wine; they were fantastic. The sweetness of the grape against the vinegar made them savory and the Sriracha made them spicy. Imagine a savory, spicy fruit.”

Eli and the Sound Cult’s Music and Pickle Emporium, now that has a nice ring to it.

Prepare to get your pants charmed off when Eli and the Sound Cult celebrate their record release at Sacramento Space on Oct. 18, 2013 at 8 p.m. Sun Valley Gun Club will also perform, all for a suggested donation of $5. This is the first show of the band’s winter West Coast tour, so give them a proper send off. Learn more about the band at Facebook.com/eliandthe.