The Heart of a Man

Equipto may be calling it quits on a solo career, but he has a busy future ahead

A wise man once told me never to use the word “unique” when describing music or a musician, because surely there was something similar. He is right to an extent, but I can say with much confidence there is no equivalent to Equipto. Born and raised in San Francisco to a Japanese mother and Colombian father, Equipto started rapping in the early ‘90s, first making his mark in 1995 with his group Bored Stiff. A champion of the underground, his career has spanned nearly two decades including nine solo albums, five group albums with Bored Stiff, four as a duo with Andre Nickatina, two with Mike Marshall and a handful of other one off collaborative albums. The quantity of the releases was always matched with quality, and the scope of subjects was just as vast.

From the beginning it was clear Equipto had something to say. He spoke with maturity and rhymed with integrity, aware of the impact of his words and what he was bringing to the culture. Citing inspiration from Gil Scott-Heron and RBL Posse, Equipto’s music has always been a perfect blend of socially aware and street. Perhaps his most distinguishing trait is his honesty. In a genre masked in fantasy, Equipto never hid who he was or what he stood for, speaking on his strengths and citing his short comings alike, basically admitting to being human. Listeners identified with his words, and to sum up a career in a sentence, allowing him to thrive as a world recognized independent artist for nearly two decades.

In late 2011 he released his most comprehensive solo album to date, Illych (his name by birth), and about a year later, he announced he was going to retire. Rappers typically don’t retire, but again, Equipto isn’t the typical rapper. His upcoming Stress Free tour with Z-Man, Lucky I Am, Otayo Dub, Mike Marshall and L’Roneous will be his last. Selfishly, this is hard to accept, but as he detailed in our conversation below, this is a life decision, and one that will not completely relinquish him into obscurity in the rap world. 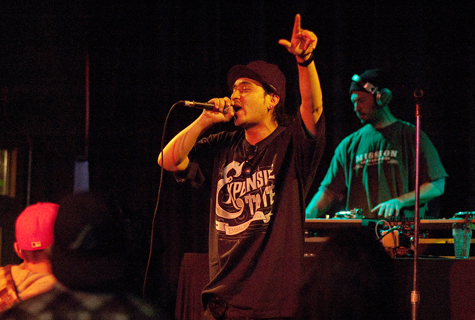 A few months back you announced your retirement. What prompted this decision?
When you’re trying to do music and reach release dates and hit the road like 50 percent of the year, you miss out on a lot. Everybody is different in their own way, but for me, I want to be a part of helping my niece and nephew read, pick them up from school and stuff like that. My momma is getting older, so I want to enjoy time with her. I want to get my label, Solidarity, in good position, and get my studio right too. Things like that are what I want to focus on.

I can’t imagine you not making music, so how are you defining this retirement?
It’s from performing, and more or less solo projects. If Bored Stiff wanted to do something, it’s not like I’d say, “No.” I want to be more of a project coordinator now. I want to be behind the scenes. I want to help young artists live out their dreams and do things that people didn’t do for us. In order for that to happen, I need to take the backseat as an artist. I’m not trying to be a manager but more of a motivator. It’s like the corny shit people say like, “Stop and smell the flowers.” I need to do that and enjoy things. Basically, I will be taking a step back. I have so much material though so it’s not even going to be like a retirement, I’m just not going to be out pushing it.

You’re such a staple in San Francisco. Do you think it will be hard going forward to separate yourself from Equipto the MC?
I accept who I am and who I became. The city means so much to me. I would never be the person who I am, and the opportunities I was given to be who Equipto is. A Japanese/Colombian out of San Francisco…in a lot of places I wouldn’t have been able to survive the way I did, or do the things I’ve done. I owe a lot to the city and my environment. I’ll always accept who I am and what I did. I am Equipto, but that’s who I am on that microphone. Everything is from the heart. It’s not as gratifying if you can’t connect with the people. You want to know who appreciates you at the same time. You don’t want to keep going just to go, like treading water. I want to know who my fans are, who know my lyrics from songs that weren’t heavily released. I can’t get back to them if I’m always pushing.

I get the feeling that this isn’t about falling out of love with music, but more what the game has turned into. Is that fair to say?
The love for the music is always there. If I hear a beat, I’m going to nod my head naturally. I came from a different era and it’s not me being stubborn, but it’s different now like with the whole pay to play to advance your career. I understand why things are, and respect it, but at the same time I can bow out gracefully, and people should respect that. I respect people’s hustles, it’s just not who I am. Bored Stiff and myself, we’ve built our legacy on not giving a fuck. It’s almost defeating the purpose if I keep trying to push and go further and do a song with this guy when I’m not even friends with him, or pay to get on a bill. Those kind of moves are mandatory in the game now, like people look down if you keep with your same recipe. It’s tiring, and I don’t want to be a part of it.

With the politics of today, what kept you going?
It came in stages through stages. At times it was like I was retiring because I was tired of everything, but I reached a point where I am content and proud of the work I’ve done. I’ve played my part, whether I was an inspiration or whatever. I feel like our generation planted a good seed in hip-hop. Everyone looks at the Golden Era of hip-hop, but years down the line, I think this era will be looked at as special like that. The underground is strong, there is a lot of dope music out there, you’ve just got to search. Just like how we love Marvin Gaye and Curtis Mayfield, but there were cats on the under too, and you wonder how they weren’t millionaires like Marvin Gaye, but those are the underground cats. The music that I’m involved with, and the people I’m involved with, we are going to be those rare finds, those gems for youngsters to find. I take pride in being a part of that.

See Equipto when his Stress Free tour hits Blue Lamp in Sacramento on March 14, 2013. The show gets underway at 9 p.m. and tickets start at $8. For more info, go to Bluelamp.com.