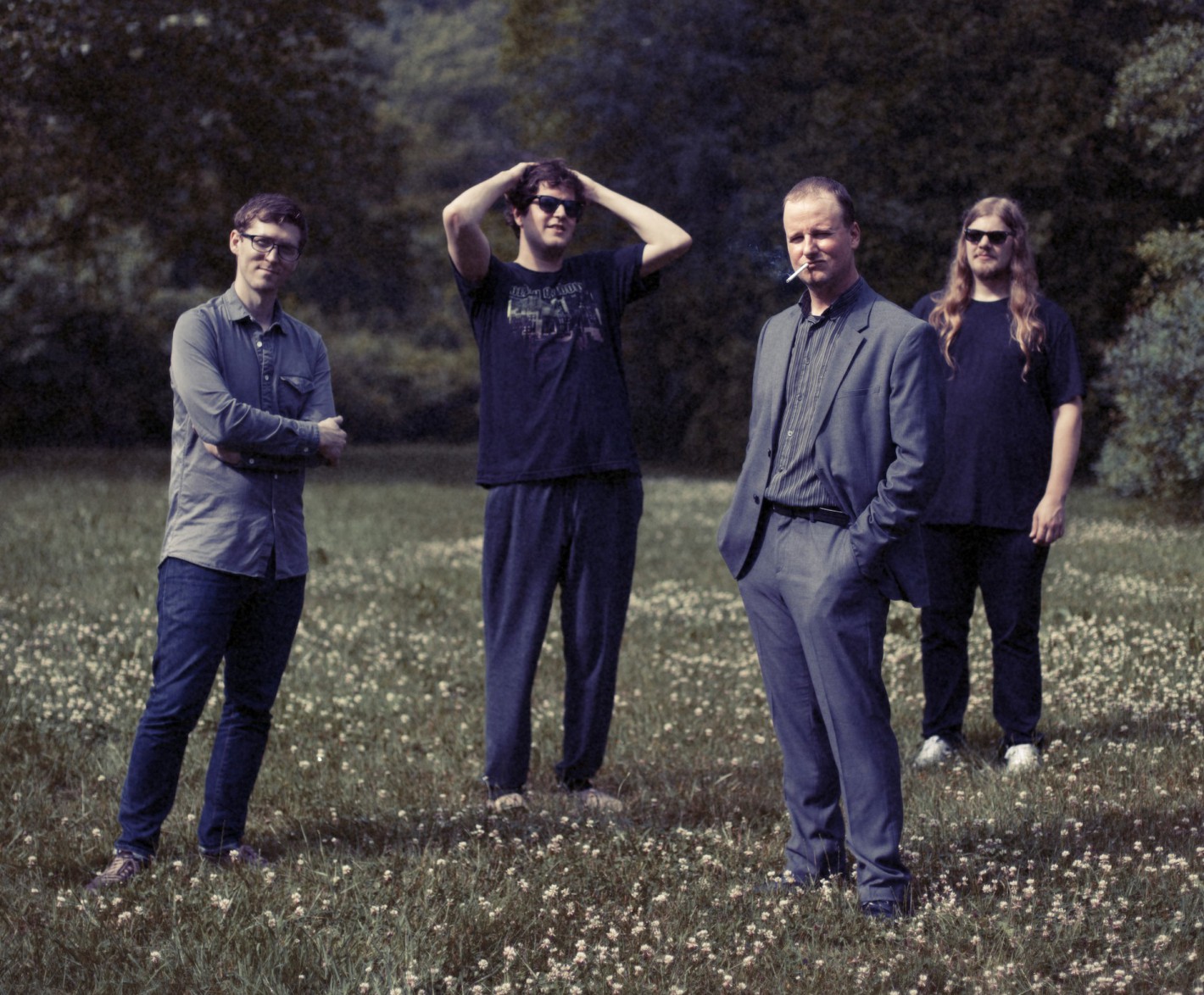 Joe Casey can’t help but notice the homogenization of American culture. When his band Protomartyr tours, he sees off-ramps with the same four gas stations, fast food restaurants and budget motels. How long before there’s a combination Travelodge, Chevron, McDonalds? A McChevlodge? Even trendy neighborhoods with rock clubs become indistinguishable from city to city. As the lead singer of Protomartyr, he could end a set with “Thank you, Cleveland” in Milwaukee—committing a cardinal sin—and have a strong argument for the error.

“In a weird way everything is becoming very similar,” Casey said during a recent phone interview. “As far as extreme regionalism, you don’t really see it much anymore.”

Which is to say, it’s not just off-ramp culture. Casey was born and raised in the industrial abandonment and extreme regionalism of Detroit. He has lived in the same Detroit home his entire life. The revitalization wave has arrived at his doorstep and that of his favorite dive bar, Jumbo’s. Since Protomartyr’s overlooked debut No Passion All Technique and again on last year’s universally acclaimed The Agent Intellect, Jumbo’s has played a symbolic role in Casey’s moral quandary as a member of the reluctant gentry. Sure, as a 30-something white guy he looks the part, but he’s tried and true native. It might not translate as a first impression, but in Protomartyr he intones with locals-only detail. Rigid and gruff in post-punk architecture, a Protomartyr song dodges singular interpretation. “Pontiac 87,” for example, is by no means devoted to gentrification, but nestled in it Casey observes “weird faces filled up the bar / half sober / outside a steady snow / all new white / with new money and false friends” and reflects “but I miss it / the way it was before.” A sentiment that extends beyond songwriting.

“That’s one of the things I kinda worry about Detroit,” he said. “Parts of Detroit are becoming ‘better’ but they’re getting similar to any other place you go where there’s an artisanal restaurant with pork belly sliders and you’re drinking out of mason jars. You can get that anywhere in the world.”

You can get it in Sacramento. Parallels between Casey’s native Detroit and Sacramento abound. Both cities dealt with corrupt mayors whose moral bankruptcy threatens the future. Both cities put taxpayers on the hook for multimillion dollar sports arenas under the guise of urban renewal and trendy new districts with thriving business that brings jobs. Sacramento has rebranded as a farm-to-fork capital. In Detroit, the city is billed as an artist’s haven with free homes as patronage in exchange for promotional art. Sacramento planning commissions rebrand neighborhoods like The Kay, The Handle, and DoCo. On the phone Casey references a Detroit website devoted to the same forced redistricting of 50 blocks in the downtown area into five fetching neighborhoods. It invites residents to reimagine their lives in ways that make them more folksy to tourists and whitewashes the decades of blight.

Our cities even have the surplus of ungovernable urban feral felines in common. On Protomartyr’s “Feral Cats” Casey smokes on his porch while the iridescent eyes in the shadows reflect in the moonlight beyond broken street lamps. It’s a derelict scene written in 2012 that over the past three years has been blanched from his neighborhood. That same scenario exists in Midtown; the feral cats holding turf wars with skunks, raccoons and opossums like an animal kingdom edition of The Warriors. The untamed blight of downtown and Midtown is officially under heavy construction to build a Sacramento 3.0. Joe Casey knows how this story goes.

The problem in Detroit is the problem in Sacramento; the problem in Austin; the problem in Brooklyn; the problem in Portland; the problem in St. Louis. It’s a great American dilemma of our time. No one wants their city to remain in decay, but how do we see to it that the work done to restore benefits those who laid the foundation? How do the artisanal proletariat compete with the wealthy developers who price them out? Casey said in his city, “the influx of young people moving into Detroit, maybe upper middle class, are not your usual Detroiter.” He said the challenge is to have “interesting, cool art scenes that don’t take away from what came before and working with the people that live here now.”

“The fear with Detroit,” Casey said, “is who is this going to benefit ultimately besides having a new stadium and a place to drink water out of mason jars?”

Much like Sacramento, Detroit is in the process of developing an arena district. What’s your assessment of the situation?
Detroit deserves new things. But the fact that they are able to build a big arena with public money and kind of fob it off as this thing that’s going to be beneficial to anybody is a little disingenuous. For the art scene it’s weird because the website for this new arena they’re building says they’re going to have all these new neighborhoods around the arena. But they are branded areas owned by corporations. This is almost a direct quote, “the cool hip place to hang out after a game and see a garage rock band in a bar.” It’s really disgusting. It makes you want to vomit. Again, you go to all these cities and you see these big stadiums and know that it’s not only Detroit that’s getting hoodwinked by it.

These are things that people really have no control over. That’s kind of the frustration. It’s not even a political process involved. It’s all money changing hands.

Advertising Detroit as an artist haven, do you feel that has merit or…
Is it a realtor’s term to sell property? Possibly. I’m not really one to speak on it. There’s exciting things going on in the city. I eat at restaurants where you drink out of a mason jar. But it seems like people are getting priced out of places like San Francisco and New York. Detroit can offer that idea of owning a house that has a front and back yard for affordable prices. I’m a little suspect when people say “artistic haven” because that just means we’ll have more shitty art. Part of the reason why being an artist is hard is anyone can do it and try to find good in it.

Is it possible it could birth a renaissance?
We already tried renaissance once. Now we just have a museum.

You express some prescient apathy and melodrama on “Pontiac 87.” Was this a decision strictly for this particular song or does it translate to your general outlook?
It was suitable for the song, but I could easily go out for a couple drinks and rant about how things were better in the past. But I think that’s a stupid way to go through life. I have these feelings, but it’s important not to look back in rose-colored glasses. People can get off on being depressed or down on their own existential drama. I certainly do. But sometimes it’s best to move on and not let that affect you.
I kind of meant it as sort of a positive. I know lately the way I tend to deliver and the way I recorded it that it’s kinda doom and gloom.

What about answers? A Protomartyr song doesn’t exactly offer much advice.
I’m pretty good at questioning a lot of things, but definitive answers are difficult. That’s why when people ask me about Detroit it seems like they want some sort of magic bullet or middle finger of answers to Detroit’s problems. I don’t have those. I don’t have those in life. I’m not living the high life necessarily. When you were younger you thought that things would be answered or that you’d get the keys at some point to the doors, only to find out those doors would remain locked. [It] can be soul crushing. But there’s life beyond that information.

Do you harbor any dystopian fears?
No. Well, this whole water thing happening in Flint is interesting to me. I think it will be traced back to the government of Michigan, which is very Republican, really hating the fact that Detroit had control of the Water Department in Detroit. Because the [government] had control of Flint, they used Flint as a pawn to try to take power away from Detroit and ended up polluting the people. I also hear that our governor was going to go to a conference to talk to people in Dubai that were in water businesses. I kind of wonder if like … Michigan is kind of a backwater state now. We have a ton of clean water. That’s what’s hilarious or goddamn rather disturbing in a way. We have some of the most fresh water of the states of the union. That’s my dystopian future. That’s the power struggle now where so many people are moving to places where there is no water that Michigan will just be a place where people take the water some place else.

In California we’re always looking for more water.
Yeah, I’m worried they’re going to build a pipeline from Michigan to California and take all our water.

Do you believe in the possibility of a greater American awakening?
I kind of wonder if that’s the cycle of life. You think something life changing is going to happen and when it doesn’t, it’s over. You have to constantly lay the positives with the negatives and what is getting better and what isn’t. It’s not like the world is constantly moving up or down. The fact that gay marriage was legalized this year was a big step that maybe five to 10 years ago you’d think was a long way off. I think by the end of it when you’re looking back on your life, whether it’s possible or not, you hope there’s more things in the good column than the bad.

What would you currently place in the good column for Protomartyr?
We’re getting along. Bands are fragile things. Artistic expression is a hard thing to do. We’ve been very lucky that we’ve been able to function pretty well. The fact that we’re able to tour as much as we’re going to do has me feeling pretty lucky. I can moan about the bathroom situation on the road, but I’m able to have a good time every night and go places I never thought I’d be able to go to.

Catch Protomartyr in Sacramento with Chastity Belt and G. Green Saturday, March 5, 2016 at Blue Lamp, located at 1400 Alhambra Blvd. Doors for the 21+ show open at 8 p.m. Tickets are available for $12 in advance at Ticketfly.com.