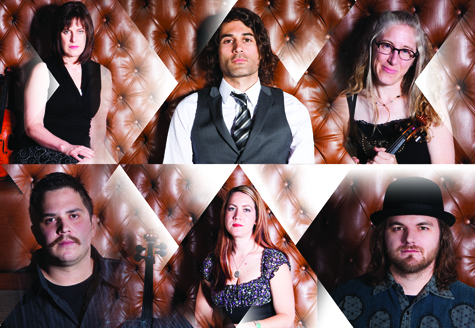 It is exactly 4 p.m. on a Wednesday afternoon when Exquisite Corps’ frontman answers his cell phone.

Observing the magnetic character on stage lead a six-piece chamber rock band during a sold-out show at the Crocker Art Museum, one might imagine that the singer/guitarist of local band Exquisite Corps is unapproachable.

It quickly becomes apparent, however, that this musician is in fact more approachable than most.

After a morning spent painting, and playing a late show for a full house in Nevada City, Calif., the night before, Valenzuela is in great spirits. Exquisite Corps played at the Haven Underground, where they shared the stage with The Still Sea from Nevada City and Pillars and Tongues from Chicago. Apparently people were stacked on each other to watch the show, and Valenzuela had nothing but good things to say about the experience.

“I always love playing in Nevada City,” Valenzuela says. “It’s super cool there, everyone is really chill and interested in music.

“It was kind of crazy to have a show on a Sunday. There was a lot of people staying until one in the morning,” he adds.

Valenzuela has plenty to be excited about. After a few hiccups and lulls in the recording process, which began last summer, the band is now preparing to release its debut self-titled album at this year’s Launch Festival, which Exquisite Corps will be playing for the third year in a row.

For those who ever fell for cellist Gretta Cohn on Cursive’s Ugly Organ, this album is worth a listen. Since the spring of 2010, Exquisite Corps sprung from a cello and guitar duo, with Valenzuela on the guitar and Krystyna Taylor on the cello, to a full band. The current ensemble includes violinists Reylynn Goessling and Kristin Arnold, drummer Robby Dean and bassist Nathan Webb, in addition to Taylor and Valenzuela.

On headphones, the seven-song album allures the listener from the start, enchanting and ominous. Track one, “Tone Poem,” begins with Valenzuela’s voice oozing over the airy, ethereal resonance of an organ, soon joined by the warm hum of the cello. Then violins come in, high pitched and full-bodied, moving the song forward as Valenzuela’s voice reaches fervent, wailing heights.

The subsequent tracks progress in the same vein, commencing with soft, mysterious beginnings, and erupting into opulent, racing symphonies conjoined with Valenzuela’s vocals, impassioned and raging as he sings about subject matter varying from the followers of Dionysus to winter landscapes. Following “Tone Poem” is “Light As a Feather,” which appeared on local music blog Live in the City of Trees.

Now the band is releasing previews of the album, song by song, leading up to the release show.

To record the album, the band of six spent a considerable amount of time at Hangar Studios with music engineer Scott McChane, who has worked with the likes of local acts Sister Crayon, Agent Ribbons, Chelsea Wolfe and Ellie Fortune.

Valenzuela had his hands in both the recording and mixing processes, ensuring that he could guide the direction of the final product.

“I was there for every single aspect of it,” he says. “It’s expensive to record, and we wanted to record as professionally as possible and make it sound as good as we could with what we had.”

Exquisite Corps’ songs begin with Valenzuela, who writes the music, working through the melodies in his head. Then he approaches the others to arrange the songs. Each member brings something to the table, coming up with pieces to add or ways to solidify the songs.

The progression is not unlike how Exquisite Corps originated, with some string compositions Valenzuela wrote a while back and wanted to put into action.

Valenzuela grew up in Orange County, relocating with his parents to Placerville when he began high school. Around the same time he took up the violin at school, and was drawn to chamber music ever since. He studied music theory in college. When he was the singer/guitarist of former local band Call Me Ishmael, he wrote string accompaniments for the band’s CD release show.

It went over well, but for some reason the band never used strings again after that performance. He wanted to do it again ever since.

“I guess I was just in love with the sound,” he professes. “The string instruments can be, in my opinion, super versatile. They can be really sweet and beautiful, and then they can be really gritty and dirty. There’s so much range there that is great to utilize in music.”

Upon running into the right people at the right time, likeminded people like Taylor, Valenzuela fell upon an opportunity to start a chamber rock band, and thus Exquisite Corps was born.

They eventually recruited Dean and Webb, who played with Valenzuela in Call Me Ishmael.

“[The band] kind of took on a life of its own, in some ways, just by having the thought a long time ago,” Valenzuela says. “Sometimes things just fall into place, I guess.”

Though Exquisite Corps has come a long way since its beginnings, gaining a loyal following in Sacramento and playing sold out shows at venues around town, Valenzuela remains modest about his musical capabilities. The following is an excerpt from the phone conversation between Valenzuela and Submerge.

It sounds like you had played in a lot of other bands prior to Exquisite Corps as well?
Yeah, some bands here and there. Nothing really that notable, not that I’d like to talk about [laughs].

OK, that’s fair.
Because…when you are younger you are in all these different bands, and later in life it’s a little embarrassing.

But what would you say your thoughts are on your progression, anyway, musically, from Call Me Ishmael to Exquisite Corps?
I don’t know, just more experience as far as songwriting and how to arrange music [goes]. Since that band I’ve been studying how to arrange for string instruments, and I’m not a classically trained musician. But [I’m] learning, maturing, trying to ensure that the content of the music is all together. When you are younger, you’re just super excited, and you’re throwing everything out there.

Some of your songs sound almost soundtrack-like on the album. I was particularly thinking that [about] “Windswept” and “I Want What I Want.” Do you ever visualize storylines as you’re writing the songs or writing the lyrics?
Yeah, totally. Either there’s a specific story or it’s like a loose story and images, you know? Maybe it’s a non-linear narrative or something. It may not always come through in a lyric but it’s something you think about when you’re writing or even when you’re playing it. You know who I thought is really good is Neko Case.

Yeah, I love her music.
Dude, she’s so rad. But she tells these stories, and I don’t really know what the story is. The story is totally a non-linear narrative. I know there’s a story in there, and it kind of draws you along.

Did you ever receive vocal training? You really belt it out during some of your songs, and I was wondering if you’re voice ever gets strained.
In college I took choir [laughs]. I wouldn’t say I ever had vocal training, though. It’s just listening to other singers and watching other singers. I have no formal training in singing. And actually, this wasn’t even something I aspired to do at first. I was mostly a musician, a guitar player most of the time. I was in band in high school, and I was never a singer. But you start playing with people, and no one wants to sing [laughs], that’s pretty much how I started singing. You just try to get better, you just work on it every day and keep working on it. I’m sure I was really bad, I know I was really bad when I started singing… As far as vocal straining, I’ll just drink more water the next day and everything’s fine.

What kind of music are you listening to these days?
Shit, I’ve been listening to PJ Harvey. I kind of got obsessed with the last PJ Harvey record [Let England Shake]. And then I’ve totally been listening to tUnE-yArDs, even though we’re not even close to that kind of music, it is pretty awesome. I mean, we’re not that type of music but I do love it. Beforehand I was listening to Elliott Smith. I always listen to a lot of different stuff, like old stuff and new stuff. The Beatles to Blonde Redhead. I love David Bowie. I was listening to David Bowie coming back from Nevada City the whole time. It kind of keeps you going. It’s a long drive and it was late. 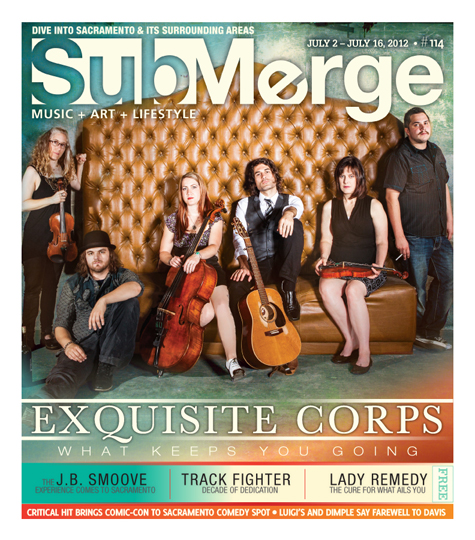 Exquisite Corps will celebrate the release of its self-titled album as part of the Launch Festival on July 25, 2012. The show will take place in front of the MARRS Building in Midtown. Doom Bird, The Honey Trees and I’m Dirty Too will also perform. This is a free, all-ages event and starts at 5 p.m.