They say you always want to go out on top. If that’s the case, then Sacramento’s Far did everything right. In the mid-’90s Sacramento was on the radar as bands like Cake and Deftones were signing to majors (remember those days?), while post-hardcore was bubbling underneath the city’s surface.

Far soon followed. After a pair of indie releases (1992’s Listening Game and Quick in ’94), the band signed with Epic/Immortal and released Tin Cans With Strings to You in 1996, in the process amassing a dedicated following. Hell, you know the story. Far released its best record in 1998—Water & Solutions—an album that harnessed punk, post-hardcore and even pop (?!) into 41 flawless minutes”¦then called it quits.

“I’m happy we stopped after Water”¦,” says vocalist/guitarist Jonah Matranga. “It was a good balance of all of our personalities.”

Those personalities have fueled various projects over the years—Matranga with his own project, Onelinedrawing, and bands like New End Original and Gratitude. Guitarist Shaun Lopez fronted The Revolution Smile. Drummer Chris Robyn and bassist John Gutenberger went on to form the more pop-oriented Milwaukee, while Gutenberger later formed Two Sheds with his wife, Caitlin.

But it always comes back to Water & Solutions—an album that a decade’s-worth of bands would nefariously hold close to their pained little hearts. In fact, Far might be one of the few bands that actually gained popularity after it broke up.

While it was surprising to hear that in November Far, after a decade apart, was planning on playing a few shows in the U.K., it’s been no surprise that the band’s recent reformation has been met with such unadulterated glee. But the members of Far have kept it loose and stress-free—they re-emerged under the moniker Hot Little Pony, recorded a cover of Ginuwine’s 1996 hit “Pony” (yes, Ginuwine), and are now gearing up for their homecoming show at the Empire on Jan. 15.

Submerge caught up with Matranga and Lopez, who filled us in on the not-so-elaborate Hot Little Pony marketing scheme, what the future holds, and why they don’t want to be blamed for Fall Out Boy.

The music climate has changed quite a bit in the last 10 years. Is that a good thing or a bad thing?
Shaun Lopez: It’s good for us, because we’re in a unique position in being able to go out on tour and be self-sufficient, and be able to make a little money on top of that. I feel for new bands starting up right now because it is tough out there. Record deals being offered to young new bands are not so great; they’re almost better off doing it on their own. For us it’s been OK. Luckily we’re in a position that we do have fans that are pretty dedicated—it’s something we’re very thankful for and very surprised.

Whose idea was it to start playing together again?
SL: It came close when we did the re-release of Water & Solutions [in 2004]. It never came to, and I think in all honesty it probably wasn’t the right time and it wasn’t for the right reasons. Chris [Robyn] and I had been talking about it off and on and then Jonah called me about a year ago and brought the idea of just showing up at a club and playing. I liked the idea of playing again, but I wanted to do it more professionally and go out on a tour.
Jonah Matranga: He always tries to be more professional than me; I’m always the guy that wants to go out and just bang it out. And he’s like, “No dude, gotta rehearse; make it good.” So we balance each other out that way.

There was this semi-elaborate scheme with the Hot Little Pony concept. Whose idea was that? And who decided to record a Ginuwine song?
JM: What looks complex from the outside is just us fucking around on the inside. We wanted to play a couple of shows, and I just really wanted to take the hype away from it because a) I don’t like it, and b) I wanted us to be as unstressed as possible. I think our friend Jeff jokingly thought of the name Hot Little Pony. And we just all laughed when he said it and thought, “Ah that would be really fucking funny.” “Pony” is a tune that we’d always play before shows back in the day. And it’s just a simple song, and so Shaun and Chris laid it down [in Los Angeles] and I came down and sang it. Shaun added his magic dust to it. I don’t know, it just came out; it was a fun, very quick thing.

Now you have your homecoming show in Sacramento. Is that going to be a gauge of whether this continues?
JM: I think it’s all a gauge. There’s nothing official on the books, but there’s a lot being talked about. I think we’re all just trying to take it as it comes. The first two Hot Little Pony shows were like, “OK, can we do this well?” Because it was really important to all of us to not go up there and suck. And then we did the L.A. shows and thought we pretty much ripped it. Then we thought, “OK, can we tour together? Can we not drive each other insane?” The whole “Pony” thing has definitely thrown it into a different gear. We’ve never had any sort of radio play like this so we’ll sort of look at that and see what that means, if anything.

Any shows beyond Sacramento?
JM: Just Sacto. We’re very excited about that. It’s a big enough show where I think it will be fun and exciting, but it still feels like home. We got some friends’ bands on there. I feel pretty sure that more shows will happen, but we have nothing on the books. And then we’re looking at trying to do a little recording together, see what happens with that. My particular take is just trying to do a couple of covers that suggest where we came from as a band. I’m very reticent to do original songs. I don’t want to do an original song just to have a new song, and have it not be as good as the old shit. Because all of our favorite old bands do that and it blows.

Water & Solutions has been touted as your masterpiece. Does that put more pressure on you to record?
SL: I realize that no matter what we do, people are always going to love that record. That’s going to be the record.
JM: Yeah, but some people, frankly, like Tin Cans“¦ more, which I don’t understand. That’s the thing with putting out records”¦I don’t get to control what other people think. But for me, there’s no pressure with people, there’s just pressure for me… I just want to know it kicks ass. We could put something out as good as Nevermind, and people will still be like, “Yeah, you know, I kinda like ‘Bury White.'” But I would just want to feel in myself that it came from an inspired place, and that I could go out with confidence and play it live and feel as strong as I do playing “Bury White” or “Mother Mary” or “Man Overboard.” Those songs, I just feel good playing them. And I don’t feel good playing them because I’m used to them; I feel good because they’re good, and they’re good 10 years later.

Far has influenced a style of music that is looked down on, although you sound nothing like those bands. Do you guys think about that?
JM: I’ve been asked that question a gazillion times in interviews, and my stock answer that sort of makes me laugh, that I totally believe is: I don’t blame Led Zeppelin for Whitesnake and I don’t want to be blamed for Fall Out Boy. We just came around trying to play rock ‘n’ roll that was less dressed up and more human, and mixing heavy shit and more anthemic shit we liked from big rock with this sort of humble, straight in-your-face element of punk. A lot of bands at the time were doing that. And as it happened, when that sort of caught on, there were a lot of bands that traded in their leopard jeans and whatever else the fuck for horn rims and tight pants. They took all the cheap parts and tried to make money off of it, and forgot the important part, which was the humanness of it.

You’ve all changed as people in the last 10 years. How is Far different today than it was in ’98?
JM: The funny thing is that we’ve all changed as people, but the personality balance still to me is working out relatively similarly. I think Shaun and I are better at recognizing that we’re different people, and talking it through, which rules.
SL: Yeah, the communication is much better. In the past a lot of the problem was that when shit would piss people off, they wouldn’t say anything.
JM: It feels good now to come in with a little more time to breathe. And I do think we’ve all, through our individual experiences, learned a little about how important it is to clear the air before shit gets crazy.

Being in a band is like being in a relationship “¦
JM: I liken it to a relationship where the sex is really good, but everything else is weird [laughs]. To me that’s the closest analogy I could come up with without sounding creepy. 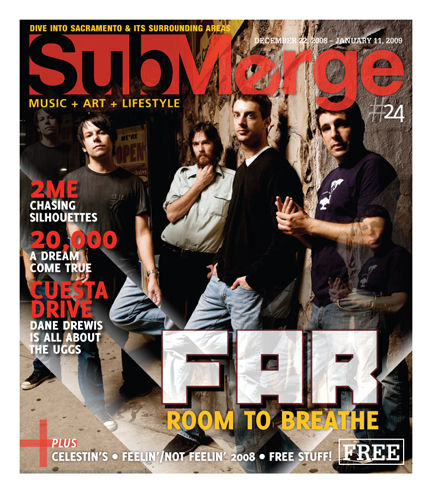