FATE UNDER FIRE: MUSIC FOR CHANGE 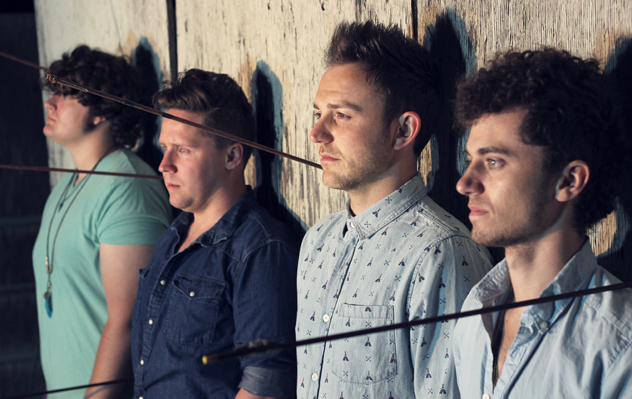 Being a huge advocate of Sacramento artists and musicians, I often find myself supporting local bands even if they play a style of music that I wouldn’t normally gravitate toward. Prime example: Fate Under Fire, a radio-ready pop-rock group who is on the cusp of making big things happen. Now, I don’t normally listen to bands like Maroon 5 or The Fray, two groups that come to mind when listening to Fate Under Fire, but I really love the local guys’ new EP What Dreams Are Made Of. It’s six sparkling tracks of feel-good pop-rock and if that’s all the band had going for them, it would be enough for me to root for them in their endeavors. But what is deeper than all the catchy melodies and memorable hooks is that Fate Under Fire is a band that has a very serious and important message, and it’s no gimmick, either.

When lead singer and group founder David James’ mother, who single-handedly raised him as her only child, passed away from ovarian cancer five years ago, something understandably changed inside him. “For the first few years of Fate Under Fire, I didn’t even mention this because it was impossible to talk about it without breaking down,” James told Submerge, “And I didn’t want people to think I was using it for attention.”

James spent hundreds of hours researching alternative cancer therapies and finding people who are beating cancer, so much so that he says, “I could really write a book on it all at this point.” It eventually became such a huge part of him that it naturally found it’s way into his art as well. “As much as I tried not to integrate my story and findings into my music, I realized it’s truly a part of me and I can’t not say anything anymore.”

Now, at every show, James asks the audience if anyone has cancer or knows someone close to them with it. “The hands fly up,” he says. “Too many people are dying of cancer every day and that doesn’t have to happen, there are cures for cancer that work. I want America’s paradigm toward it to change, and I can already see it happening,” James says. He even personally engages with people when given the chance. “I tell people to come talk to me personally after we’re done playing so I can give them the resources I have found.” One of the organizations that the band supports is called People Against Cancer, whose website (Peopleagainstcancer.org) states, “We feel it is important to understand all options from conventional cancer treatment to alternative cancer treatment, to new and innovative forms of cancer treatment in order for people to make truly informed decisions.” Other non-profits that the band supports, according to their Facebook page (Facebook.com/FateUnderFire), are Juice for the Cure, Compassion International, Lifewater International and others.

Having an underlying message and the burning desire to spread the word about cancer research and alternative medicines is what keeps the group going. “It makes playing music that much more meaningful,” James says. “Especially if it can save just one life.”

Their message soon may reach a much wider audience, as Fate Under Fire has recently started working with ZOOmania Music, a Los Angeles-based boutique music publishing house whose clients have had their tunes heard in everything from Modern Family episodes to The Fast and the Furious: Tokyo Drift. “I am hoping this deal can land some FUF music in some TV shows, major motion pictures and potentially a good record deal,” says James.

Fate Under Fire will celebrate the release of What Dreams Are Made Of, which was recorded at James’ home studio in Antelope and then mixed by Eric Robinson (Pink, Sia, Matt Nathanson) and mastered by Eric Boulanger (One Republic. Plain White T’s, Colbie Caillat), on Saturday, June 22, 2013. The EP release show will take place at the Wells Fargo Historic Center, located at 1011 10th Street in downtown Sacramento. Doors open at 7 p.m., the cover is $10 and all ages are welcome. Ten percent of the proceeds will go toward People Against Cancer. Sharing the bill will be Josh Falcón (formerly of Method Echo) and Ben Woodward.