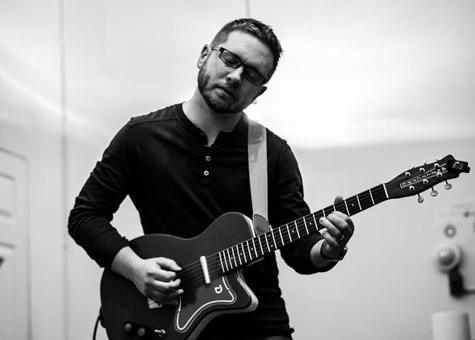 Interviewing Ross Hammond on a Friday afternoon while his wife was out of town meant a secondary task of taking his 18-month old daughter, Lola, for a stroll around the 17th and L block of Midtown.

Lola led the way, while Hammond and I discussed his upcoming Ross Hammond Quartet record due this month. As we strolled and pointed out flowers, dogs and trucks (Lola loves trucks and buses), it became apparent the little blondie was responsible for changes and inspiration in her father she’ll not understand for years. The record, Adored, and Hammond’s artistic growth displayed on the album would not be possible without her.

Our walk began in the alley outside Old Soul Coffee. We did roughly three laps of the block and if we stopped the question was posed, “Lola walk?” In answering, Lola formed her first contribution to the interview tape “Lola walk.” Many of Hammond’s responses were fractured with quick “stay close” requests, but we eventually got down to brass tacks. The immediate information to hash out: Who are the players in the Ross Hammond Quartet?

The ensemble came together mostly through the intricate web of the jazz scene involving booking, travel and of course, collaboration, although Hammond first came to know each member from owning their albums. Whether on stage or in the studio, he said he had several surreal moments that left him pondering, “How did I get here?” The Quartet comprises Hammond on guitar, Vinny Golia on saxophone, Steuart Liebig on contrabass guitar and Alex Cline on percussion. Hammond said he’d known Golia from booking him a gig at the Cool Cat Gallery on 24th–back when it existed–and Cline in a similar fashion. Cline is the twin brother of legendary guitarist Nels Cline, who’s currently playing lead guitar in Wilco. “It’s freaky, dude,” Hammond said regarding the Cline brothers. “They’re identical and both really tall.”

As for Liebig, “I don’t know how I met, Steuart… I guess through the scene.”

He played three to four gigs, including the In the Flow Festival in Sacramento last year, with the members, planting the seed for the quartet. After he’d enlisted the three musicians for a studio session in Los Angeles, the makings of an official ensemble came to fruition.

When it came time to name the project, Hammond was surprised by the other members’ suggestion of naming the quartet after him. At 34, Hammond is the youngest member of the group while the rest were born as far back as the ‘40s. It is a humble and impressive gesture coming from three renowned L.A. jazz musicians who have each had ensembles bearing their namesakes.

“For lack of anything better that’s what it is,” Hammond said. “I’ve never had a quartet before. I also feel like I couldn’t replace any of those guys and still call it the same thing.”

Recorded at Newzone Studio and engineered by Wayne Peet, the album was tracked in six hours with only a few songs needing alternate takes. It’s a feat that speaks to the veteran musicianship of Hammond’s quartet. Hammond would play the riff he had in mind for a song and the ensemble would offer a nod or “OK”–no further tutelage required. He said after each track, it was understood that it felt good and they would move on to the next song.

“Playing with these guys it’s just about staying on the wave,” he said. “You don’t have to give them much instruction at all. I think one of the instructions I gave Vinny was, ‘OK, as soon as this song starts you have to come in like an elephant,’ and that’s what he did.”

Adored is carved from a foundation of folk songs with the title track being a lullaby Hammond sings to Lola at bedtime. Hammond said three of the songs are lullabies he sings. After she’d go to sleep he would figure out the notes and write out the lullaby. The writing is at its most encrypted on “Maribel’s Code,” in which the melody is an intervocalic code built from Lola’s initials: LMH.

“Most of the stuff I write has either a dedication or an idea, be it political or romantic,” Hammond said. “I’m never just like, “oh this is a cool riff, I’ll call it…’”

Three years ago when I first interviewed Hammond, he shared a similar sentiment. The inspiration behind the album title An Effective Use of Space came from a saying his wife frequently used. He said it’s one she still uses to this day. Hammond listed his wife as still his deepest muse, but the birth of his daughter is the primary source of inspiration behind Adored.

The immediacy of the recording is palpable, but it’s done in maturity. Hammond said the difficult task in preparing the music was giving the songs a collected feel, but without being united to the point of bleeding the songs together. Adored roars in, spastic and angry, with “Adored” but as “Sesquipedalian” mellows out it introduces the soft lullaby of “She’s My Little Girl.” Consider the album to be much like Hammond’s day-to-day with Lola; awake at 6 a.m. and full of energy, a settling in period, a mid-day walk with small fits of exuberance and crankiness, a lullaby for a nap or the night’s tuck-in. It is all lovingly expressed in the sea changes of Adored.

“Alex [Cline] told me he doesn’t think you mature as a musician until after you’ve been a dad,” Hammond said. “The gist of it was you stop trying to impress people and focus on filtering this feeling you have and this beautiful thing and turn it into a song. Your muse is different. The goofy songs aren’t there anymore. Having a kid forces you to grow up and you grow up in everything. If anything it’s more purposeful now.”

With the particulars of the album discussed and rocks and leaves in our pockets courtesy of the tyke, Hammond asked Lola, “Wanna go swing? Lola swing?” She offered her second sentence of the afternoon; a sharp “Lola swing.” With that, they strapped into a bicycle and road off to the park. 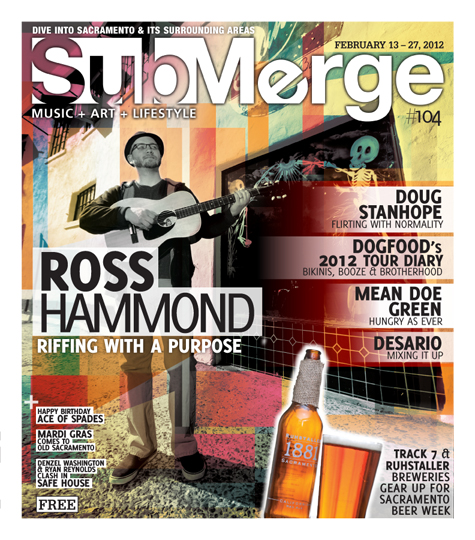 Adored by The Ross Hammond Quartet will be available Feb. 27, 2012. You can preorder it now at Rosshammond.bandcamp.com/album/adored and also listen to the title track. Hammond and co. will throw a CD release party on the very day of its release at Luna’s CafÃ© in Sacramento.