Long before Nevada City, Calif. attained national notoriety as a hotbed for the anti-folk scene of the mid-’00s—a breeding ground for the disciplined howls of the Russian River kids—the city’s musical landscape thrived not unlike that of the monolithic post-punk scene in Sacramento. In the late ’90s and into 2002, Pocket for Corduroy erupted like Vesuvius on an unsuspecting Pompeii, eschewing conventional rock ‘n’ roll chasms to forge an inventive urgency to their sonic explosion. In five years they played alongside some of underground rock’s biggest bands (or those who would go on to become some of its biggest bands)—Pinback, Guided By Voices and The Velvet Teen, among others. And then in 2002, it was over.

Pocket for Corduroy—Andrew Hodgson (vocals, guitar), Dan Elkan (vocals, guitar), Peter Newsom (drums), and Thad Stoenner (bass)—splintered into myriad other projects, including Black Bear, Daycare, Millionaireplanes, Holy Smokes, Hella, Casual Fog and Newsom eventually recorded and toured with Devendra Banhart. Elkan and Stoenner have been busy with the experimental pop-psych of Them Hills as well, but it wasn’t until an old friend, publicist and booking agent (the absolutely darling Jesse Locks) asked the band to play for her 30th birthday party that the band decided to dust off the PFC catalogue and reunite.

There’s no telling how long this reunion will last. As you’ll read in this exclusive Submerge interview with Elkan, the band does have one other show booked aside from the private affair of Locks’ party, at Harlow’s on Sept. 10 with By Sunlight, Bright Light Fever and Silian Rail. But one thing’s for sure: Sacramento is in for a reawakening of one of the brightest bulbs in its flickering history.

How did it feel to be back in the same room rehearsing with all of the original members of Pocket for Corduroy after seven years?
We all currently live in the same town again and are all still friends, but for whatever reason don’t get to see each other that often. I mean, we see each other at shows and barbecues and such. We’ve all played music with each other in some combination or another, but never the four of us, never playing these songs that are all between 8 and 12 years old now.

Being back in the same room with everyone, playing the old songs, felt very natural, actually. In the first practice there was a lot of smiling and laughing. Something about it feels very familiar, but at the same time there’s nothing about getting back inside of your brain of 10 years ago that is not bizarre. The way we wrote, the way Andrew and I formed the guitar structures; all of it feels pretty foreign. That being said, a couple songs into the first rehearsal and it sounded exactly like what you might expect: a Pocket for Corduroy practice.

Do you see the band possibly moving on with some more shows if the first two are very successful?
Great question. None of us know the answer. The original plan was to rehearse and play for Jesse’s birthday [on Sept. 12]. I think we figured that if we were going to put the work in for one show, we might as well do one more. I don’t think it’d feel right to any of us if we didn’t play a Sacramento show this time around. We received so much love from Sacramento at the time we were a band. It really did feel like home every time we played, sometimes even more so. We changed our plans and added another show for that reason. At this time we’ve got two shows booked and that’s it.

We hope the shows are successful in that we hope that some people (including ourselves, and hopefully some new faces) have a good time and enjoy the flashback. My hope is that anyone who wants to check it out will be able to. I’m not sure if any other measure of success with the shows would affect our decision to play more, one way or the other. 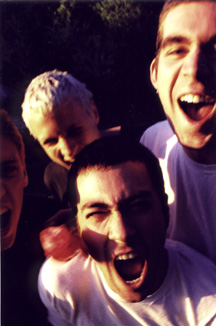 In what kind of musical climate do you find Pocket for Corduroy reuniting (if even briefly), and do you find a similarity to the contrast of how you fit in when you began and even now during this reunion?
I haven’t really given much thought to the musical climate in regards to Pocket for Corduroy in 2009. I haven’t considered the context, because I don’t feel like there is one. The fact of the matter is that we started this band about 12 years ago now and the last time we played was over seven years ago. This is a band, like any other, from a time and place. A lot of people have told me over the years that they thought we were ahead of our time and referenced that they felt that following our breakup, there were a lot of bands that were very successful with a similar but more commercial sound than we had at the time. I don’t agree, but I’ve never been a great judge of my music in that way. I never felt like we fit into any scene then, and I certainly don’t feel like we fit into what’s going on in music now. We were always just trying to write good songs and never identified with any genre or fad, probably as a reaction. Maybe that was our mistake. Depends on what you’re going for, I guess.

In what ways did you attempt to distance yourselves from the artistic mark you left with Pocket for Corduroy when you began Them Hills?
I don’t think I ever tried to distance myself stylistically from the work I did with Pocket for Corduroy. I feel like my approach has always been the same. I’m always trying to write a better song than the one I just wrote. When I started Them Hills, I definitely and consciously made the decision to have less going on, hence the three-piece, but other than that, I don’t feel like I’ve made any attempt to distance myself drastically from anything I’ve done musically in the past.

What is on the horizon currently for Them Hills?
We just finished a new Them Hills record that we’re calling Process. We recorded it all on analog tape with a friend of mine, Manny Nieto, in Los Angeles. He did a bunch of work on the last Breeders record, Mountain Battles. We were sold with the sound of it and made arrangements to go record it with Manny, raw style. We are looking for someone to help us release the record on CD and vinyl, but in the meantime we’re pre-releasing it ourselves by having the first half of the record available at shows on CD and the rest of it available soon digitally through the iTunes music store and other digital retailers. It’s already up on Emusic, but iTunes is slow to get it happening. We’ve been laying low-ish but we’re planning on playing out a bunch, and we’re excited about the new record and are getting ready to start writing the next one.

What is your overall goal with regard to this reunion? Would you like to record again, tour again, play again with this band?
The initial goal was to play for Jesse’s birthday. It turned out to be a great excuse for the four of us to spend some time together again, which has been great. We’re going to try to throw together a limited release, a CD that will compile all of our recordings plus a few more that no one has heard. We’ve got a couple shows to play. We want them to be cool. That’s really it as far as we know right now. Though, it has been pretty fun so far!