Fight for Your Lives 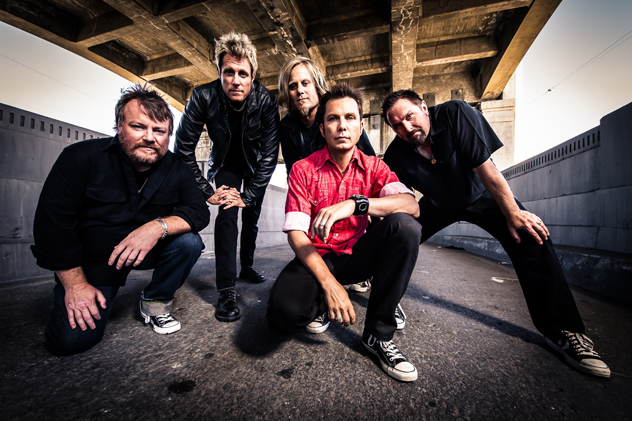 Oleander Returns with a Defiant New Album, and a New Lease on Life as a Band

Don’t worry; you’re forgiven if you don’t immediately recall, recognize or even remember Sacramento modern rockers Oleander. Unfortunately, that’s just the way the music machine operates. The band, which got its start in Sacramento nearly 20 years ago, hasn’t released an album since 2003’s Joyride. Even more time has passed since the band had a successful single: 1999’s February Son featured the hit “Why I’m Here,” a modern rock radio staple that’s still played to this day. But in an age when content saturation—mostly online—is paramount for a band’s survival in the public eye, it’s possible that 15 percent or more of you have no inkling of what or who an Oleander is.

To edify, Oleander were born out of the uprising of the post-grunge set that flooded rock radio and MTV following the unexpected successes of Nirvana, Pearl Jam, Soundgarden, et al. Contemporaries amongst this tributary of guitar-heavy, brooding rock crews are either still moderately well-known (Bush, Matchbox Twenty) or have been summarily abandoned, fairly or not (Seven Mary Three, Candlebox, Silverchair). Within this ridiculous kind of parameter, it’s equally ridiculous to try and position Oleander into either of these camps. To their credit, the band—vocalist Tom Flowers, bassist Doug Eldridge, guitarists Ric Ivanisevich and Rich Mouser and drummer Steve Brown—have rarely wavered from the musical motif they generated when they first began, lending them integrity and a resiliency that is rare in a lot of groups who were chewed up and sort of spit out by the business.

After a lengthy hiatus following the Joyride tour—the band insists they never broke up—Oleander have revitalized their outlook on being a band, and have taken their time to reinvigorate the rush of creativity that their first few releases inspired. Their new album, Something Beautiful, exudes that resiliency through powerful chord-mashing, heavy drums and anthemic rock ‘n’ roll. They’re ready to take the next step forward together, as Flowers discussed with Submerge from his home in Los Angeles.

Oleander has been described as underdogs. Is that a pretty accurate description of how you and the band feel?
I think the odds are stacked against any band at any given time to be able to be successful in the music industry. Very few bands get signed; fewer than that sell records. When we were coming up, we definitely had to fight our way to opportunities, and then we had to fight our way through challenges. We were fortunate enough to have achieved a certain level of success, at least once we got the first record out there. Certainly “Why I’m Here” went a long way for us. We’ve always played with a bit of a chip on our shoulder; that’s just who we are. After taking such an extended break from activity and the business, we feel like once again we’re going to need to defy some odds to reestablish ourselves. I think it’s a lot easier to come at it from a humble perspective rather than assume that you’re something that in reality you’re not. When you come at it from that perspective, you end up taking things for granted and that’s not a position we want to find ourselves in.

Things have moved at a deliberate pace for Oleander since you guys reformed a few years ago.
Yeah, we got back in the same room and back to enjoying each other’s company in a rehearsal setting, knocking the rust off of the guitars and the amps and reacquainting ourselves with some of the songs that we’ve played millions of times over the years. We slowly grew more and more comfortable with being in the room together and 15 minutes into the first rehearsal, we’d basically written “Daylight,” which is one of my favorite songs on the new album. We’re looking at each other and the hair on my arm is standing up and we realized that there’s something very special going on right now.

One of the positive byproducts of that break was that we were able to discard a tremendous amount of clutter and baggage that we’d accumulated after so many years of grinding it out on that treadmill of the industry. Constantly writing, recording, packaging, promoting, touring, again, again, again. The break really gave us an opportunity to breathe and gather our senses a little bit and get back to what we experienced with that first rehearsal where we were having fun. It wasn’t much fun toward the end before we walked away.

So it was more a series of events, not one in particular, which led to the hiatus for the band?
There was no identifiable moment. The year we started to step away for a minute was I think we’d come off about 200 days in that year that we’d been out on the road. We’d talked about taking a break for a while, a short break, just enough for us to go back home. You’ve got to imagine, when you’re living on the road constantly, we left behind our families and our friends, and we were missing out on birthdays and funerals and weddings and life all for the sake of promoting the album du jour. It’s an honor and a privilege to be able to do that for a living—don’t get me wrong, we’re incredibly grateful to have had that experience and to have it moving in the foreground again—but it comes at a cost. Before we took the break…everything we got into this for, everything we were enjoying at the beginning wasn’t there anymore. That’s not how it should be.

Did you always know you’d likely return to the project?
We didn’t know exactly when we were going to get back into the room and recommit to doing it again. I’ll be honest with you, we got home and it was really nice. The things that people take for granted or that they consider labor we considered fun. Doing dishes, mowing lawns, raising kids and having stability on a regular basis, that was kind of unfamiliar to us because we’d spent so much of our lives just getting into a vehicle, getting from point A to point B, waking up, getting ready for a show, doing press, shaking hands, meeting people, signing things, getting in the bus, taking off, going again. It took me about a month-and-a-half to get comfortable sleeping in an actual bed. I would always end up on the couch because the dimensions of the couch were similar to the bunk I’d been living in on the bus.

So then even when you got back into a room together to play you didn’t feel pressure to produce something right off the bat…
No. I don’t know if you’ve heard the record, and I don’t know what you think of it, but from my perspective it’s our best album to date. And I know every artist with every new album, they think it’s their best piece of work. But I honestly believe it. It’s a direct result of the fact that we had all the time in the world to spend every minute getting attention to every detail possible per song. We had zero pressure. We didn’t have a label over our shoulders telling us to hurry. It was just doing what we wanted to do, getting back to what we got into this in the first place for, which was just being creative. It’s very similar to what we did with February Son; we had our whole lives to write that. From that point forward, though, it was just a constant grind.

It sounds like a very resilient, uplifting album.
Yeah, it is. Something about this band and something about our experience as a band that harkens back to the underdog theme is that we definitely know what it’s like to get the shit beat out of us and to face a few options. You’re either gonna take the left turn or the right turn; you’re going to get up or you’re going to stay down. We’ve always rallied around our mistakes personally and challenges we’ve faced as a band and gotten back up. I really wanted to portray that kind of spirit and attitude in these songs, and I kind of always have. There’s a recurring theme to every album. That’s how my life’s been, a lot of ups and a lot of downs…mostly ups. We’ve figured out a way to turn lemons into lemonade.

Oleander is releasing their new album Something Beautiful Friday, May 3, 2013 at Ace Of Spades (1417 R Street). Allinaday, Track Fighter and G.O.D. open the show. Doors at 6:30 p.m. Tickets are $15. Go to Aceofspadessac.com for tickets. For more information on Oleander, visit oleander.net, Facebook.com/oleanderband, or follow the band on Twitter at @OLEANDERBAND. 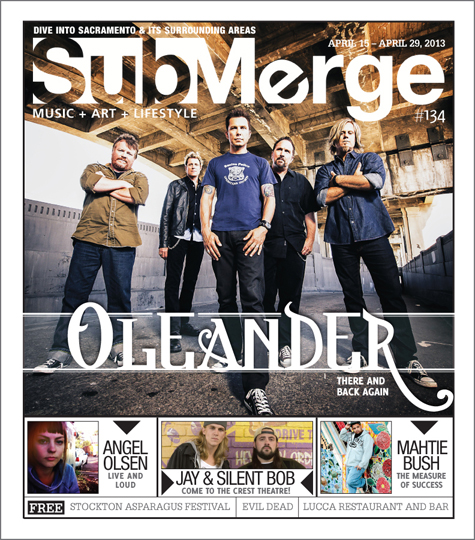