Find Me Fighting Them Set to Release New EP

No Guns, No Problem

With their complex instrumentals and emotion-packed lyrics, Sacramento band Find Me Fighting Them has every right to be excited about the upcoming release of their EP, It’s a Big Bad World and I’ve No Guns to Fight With. As the poignant notes unfold, you’ll discover shades of At the Drive In, Minus the Bear and a definite Radiohead influence.

The band was originally called Audrey Is a Narcissist, and was formed several years ago when singer and songwriter Jeff Wright was still in high school. Drummer Cliff Mattis and guitarist Matt Nielsen have also been long-term members of the band.

In 2005, they made the decision to change the name from Audrey Is a Narcissist. “It’s a tongue twister,” Wright explains. He states that when first hearing the name, the usual reaction was, what? Hoping that a name change would also free them from some of the negative history associated with the old name, they began brainstorming.

Wright was largely responsible for the choice of the new name, Find Me Fighting Them. “A lot of names we came up with weren’t as meaningful or as challenging,” he explains. “It seems like everyone is always having a struggle. It was more of a way that we could express everything we were going to try and write about in the band with our name.”

The band has been through several changes in band members. When Julie Baenziger joined the band, she was originally supposed to play bass—but it turned out she had a wide array of musical abilities. “We felt that it was completely stupid to not utilize her other talents,” Wright says. Baenziger now shares vocals with Wright, as well as working with keyboards and percussion. Current bassist Max Mitrovich joined just this past February.

In addition to singing, Wright also plays guitar and drums, and now crafts all of the lyrics for their songs. He begins with events that have happened in his own life, and uses metaphors to express them in the songs. He often follows a particular concept throughout a collection of songs, such as the idea that people aren’t meant to work meaningless jobs day after day. “People aren’t meant to go to work every day, sit in a cubicle, file papers”¦I don’t think people are meant to live to work,” Wright explains.

This really hits home in Wright’s own life, as he’s done everything in his power to ensure that his work and his passions can peacefully coexist. He has been running a recording studio from his home since high school, and graduated at age 16 in order to pursue a certificate program in commercial music recording at American River College. At only 18 years of age, he has already recorded albums for a variety of bands.

Having just moved out of his parents’ house, his most recent songs are about that transition between a stable home with mom and dad and being thrown out into the real world. Wright moved to Midtown last July, where he now lives with Baenziger and Mattis. Mitrovich lives only a couple of blocks away. This camaraderie is a large factor in why their music works so well. “The main thing behind us is we’re friends before musicians,” says Wright. “It makes for good chemistry.”

Find Me Fighting Them had one release last year—a full-length album entitled You Are the Machine. This album combines the talents of Mattis, Nielsen, Wright and former bass player Mylan Myers. While the band was happy with the outcome, the album was also a learning opportunity. “We wanted to do something more artistically creative but still with a pop sensibility to it,” Wright explains. “And still mixing in experimental and shoegaze style.” Wright defines shoegaze as “a style that is more focused on healthy musicianship.”

Currently, they’re in the process of releasing the EP, It’s a Big Bad World and I’ve No Guns to Fight With. The EP also features former band member Matt Vincent, who does the bassline for the song “Two Years Without Roads.” It is already available for download at iTunes, Amazon and Rhapsody, as well as the band’s Web site. The physical copy will be available March 6. Their CD release party will be held in Sebastopol, where they will play with Pet Sounds and Oh Apollo.

The band has already started on their next two releases, both of which will also be EPs. “Our main focus is to get all of our material out there,” Wright says. “We want to spread it out.” One of the EPs will be a handful of songs they have recently been working on, and the other will be a CD of covers, which includes their versions of songs by Radiohead, TV on the Radio and the Yeah Yeah Yeahs.

The band has played about a dozen times since they officially became Find Me Fighting Them, but Wright feels that their upcoming shows will be their best yet. Before, they were really just “testing the material,” he says. Overall, Wright hopes that anyone who attends one of their shows will take back something bigger than just having a good time. “It’s a pretty big emotional release [for us]. I want [the audience] to feel something too.” 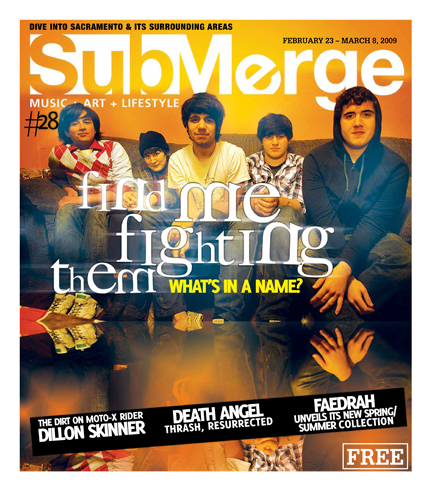