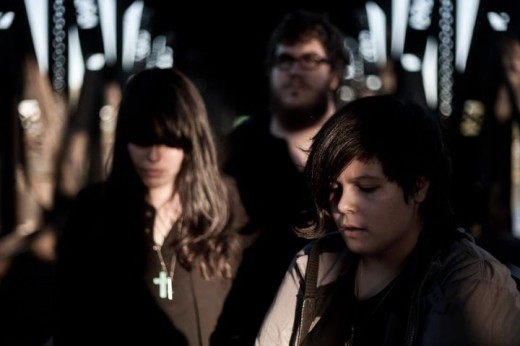 On a cold Saturday night, Sister Crayon kept me warm. Not with blankets or pea coats, but with hope for a better Sacramento music scene. Some say it’s dead and gone; that all the good bands are broken up and nothing new can replace them. Others remain optimistic—attending the shows that get ignored and filling the dance floors that are void of moving feet. What we all agree on is our love of good music and the desire to have it here in our great city. Sister Crayon’s recent performance at Luigi’s Fun Garden was a step in the right direction.

The crowd that gathered outside Luigi’s Fun Garden squeaked about on the wooden deck that hugs the outside of the impressive MARRS building on 20th and K. As Sister Crayon set up on the cobalt colored stage, they had a certain air about them. The four of them were positioned patiently behind their respective instruments, fondling them appropriately with an unbreakable focus.

Surrounded by keyboards and synthesizers, Genaro Ulloa was tucked neatly into the left corner, methodically turning knobs and wrestling cables that twisted and hooked like octopus tentacles. Dani Fernandez hovered over an MPC beat machine, picking at it like an impatient child at the dinner table, deciding what she liked and what needed changing. Leon Smith sat hunched over his drum set, a long gray scarf fastened neatly to his neck. After catching up with Terra Lopez, the high priestess of Sister Canyon, I learned that during the course of writing the record Loneliness Is My Mother’s Gun, a Beatles-inspired title no doubt, she’d been slowly compiling a full band, and tonight was their first performance together.

Fernandez played a straight-ahead 808 beat that concisely anchored their first song as an airy, backward guitar loop smeared across our eardrums; thick as paint. The music opened up to a bleeding chorus by Lopez. “It’s so easy to get distracted”¦“ she repeated over and over, her voice mimicking a sampler. The texture took precedence over a constantly changing song structure. The songs were very linear and built with each new layer, be it Smith’s minimal drum playing or Lopez’s use of the Kaos pad to echo and distort her voice, which was undeniably strong. Each ‘down tempo’ gem sucked the easily entranced audience deeper and deeper into Sister Crayon’s universe of other-worldly noises, samples and synth lines. The overall effect was a little reminiscent of Godspeed You Black Emperor, Coco Rosie and BjÃƒÂ¶rk, the latter two being a big influence on Terra. The sound was minimal drums with maximum vocals that glide over the carefully quieting sounds of Ulloa’s keyboard melodies.

The rabbit hole took us to the last song, a nine-minute masterpiece filled with nearly inaudible field recordings of strange voices, reverberated harmonica, dissident guitar and a tardy drum build by Smith. The last note faded and the cold night was forgotten by an eruption of fiery applause.