Friendly Fires are tapping into an energy that has turned entire cities into dance floors. The samba rhythms of Brazil have long been important to music culture, most notably having a monumental influence on jazz. But the boys from St. Albans, United Kingdom, aren’t hangin’ with the “Girl from Ipanema.” Friendly Fires have borrowed from this rich genre of music and have crafted a sound that is at first pop music with an electro edge but when explored exhibits complex polyrhythms and well thought out lyricism. A song like their new single “Kiss of Life” is a prime example of their efforts in full swing.

“On ‘Kiss of Life’ we based it around that kind of rhythm and a couple of samples,” says drummer Jack Savidge. “We got the feedback guitar and the samba group in to play with us. We kind of pushed it.”

The Mercury Prize nominated band released a few singles independently, including their hit “Paris” before they were signed to XL Recordings in 2008. Since becoming label mates with bands like Radiohead and The White Stripes, the pace has picked up a bit and a full-length, self-titled debut featuring the critically acclaimed “Jump in the Pool” and “Skeleton Boy” followed shortly. With all the sudden attention, other nominations for various awards started to come their way, which the band took with a grain of salt after the significant but not devastating loss of the coveted Mercury Prize.

“It genuinely doesn’t really mean that much,” explains Savidge. “I mean, if we’d won the Mercury Prize it would be a big thing for us. A lot of the others, it genuinely isn’t a big thing.”

Currently on tour with the painfully hip The xx, Friendly Fires will be crossing the Atlantic to finish off an extensive tour here in the States. The last time they were here was 2008, supporting Lykke Li and only coming as close as The Independent in San Francisco. This time around, they’re the main attraction.

“I think it will be good. It’s our first proper headline tour in the United States,” says Savidge.

You can catch them live at Sacramento State on Nov. 24 inside the University Ballroom, where dancing will no doubt ensue. Submerge caught up with drummer Jack Savidge as the band was preparing to play a show they helped organize called The Warehouse Project in Manchester.

You guys are almost at a point where you think it’s not going to happen for you, you start off recording songs in a garage, you make limited edition pressings of your music and then all of a sudden you’re on tour with Crystal Castles and then Interpol and after that signed to XL and are now label mates with Radiohead! Has the past couple years been a little overwhelming?
When we were recording the songs in the garage, there was never any fearing that, oh no things aren’t going well. Because as a band starting out, it’s always amazing to have a record of your music. That’s always been amazing for us. So, it wasn’t really like, “Oh no,” we’re just doing this thing and then all of a sudden it was a whirlwind. It seems to have grown kind of gradually. It’s kept on growing and growing and we’ve been touring pretty much relentlessly for the last couple of years. So I guess now we’re seeing the fruits of that. It’s always strange as a music fan, going into HMV and seeing your CD there and to read magazines that you’ve read since you were a teenager and read about yourself. Or seeing a TV program that you videoed as a teenager religiously and then you’re on them. It’s weird. We’re all sort of music obsessive, nerdy types. You can get really blasÃƒÂ© about it because it just becomes another thing in the day that you’re going to do. Say, playing a big show or playing a festival. You do kind of get a sense of, look how far we’ve come. We’re doing these things that I dreamed of doing.

I watched your hi-tech Flip behind the scenes footage on the Web site, and it looks like the three of you genuinely get along really well. Is the songwriting process as agreeable?
Yeah, generally. There’s the occasional disagreement, but I think there have been a couple things that have been slight sticking points. Obviously it’s not all white and rosy. But it’s quite easy to, if there is a disagreement, it’s quite easy to just have a deep breath and then get on with it. The mood never gets too dark, even though there are differences of opinion. That’s important for a working relationship. Everyone has their opinions, but I suppose we spend so much time together that it’s either get on well with each other or just have a horrible time all the time. I think we’d rather just get along well with each other.

There’s a lot of emphasis on percussion in your songs. The new single “Kiss of Life” is a Brazilian rhythm, which I know is big inspiration for you guys. What is the layering process like? Do you have a percussive groove that leads the idea or do all the bells and whistles come later?
I’d say, usually beforehand. We generally work on songs from the bottom up. We get something that sounds—some kind of drums and bass groove that sounds good. You know, the mapping out of it all. What might be the verse, what might be the chorus. We tend to add a lot from there. Because of how we write, which is generally ideas go straight into the computer and then we can layer things up like that, rather than if we were working everything out in the mode of a live band. But we’d only be able to imagine half as many songs as there are hands able to play them at one time. As we work on the computer there’s a lot of room to put down loads of percussion and make something sound like a really big rhythm section before vocals get even thought about. We try to do as much to an instrumental track as we can and then usually it leads the way to adding vocals on top. I think it’s kind of helpful to him [Ed MacFarlane, vocalist] to have a vibe there and the percussion definitely helps that. It’s always an atmosphere thing—the percussion. You can get the impression of a lot of energy by building up those layers. That informs the rest of the song.

What is it about the Brazilian samba that interests you so much?
It’s just really exciting sounding music, because it’s so percussive and so intricate. It’s always going to sound really exciting. I think there’s a theme to that. It almost found us by accident, because look at “Jump in the Pool”: almost by accident that had a slight kind of a samba feel. Although that was never what we were actually aiming for, it just ended up like that. I guess it found us. Actually the stuff we’ve been doing recently, there hasn’t been an awful lot of songs that sound very Samba or anything.

What’s the new stuff starting to sound like?
It’s pretty varied, actually. We always want it to be varied. There’s one song that sounds a bit like R. Kelly or something.

Like “Trapped in the Closet?”
No [laughs]. More like “Vibe”-era R. Kelly; like Dangerous-era Michael Jackson. The sort of”¦ Is it new jack swing? I guess it’s new jack swing.

That ’90s R&B sound?
Yeah, yeah. But a bit more upbeat. I guess the ’90s were on Timbaland and stuff, who pushed it a bit more sparse and a bit slower and a bit weirder. But yeah, I think we’re vibing off the early ’90s stuff. There’s some quite groovy ones using a lot of”¦vaguely afro-y. But I don’t want to say that because everyone will think we’re going all Vampire Weekend or something. Actually, we’ve got three ballads on the go. We’ve never really had a very slow—I guess “Strobe” is quite slow; we’ve never really had very slow, lighters in the air songs. So maybe there’ll be a few of those on the next album.

I think what sets you guys apart from similar bands is the content in the lyrics. They’re not these hollow songs with a catchy hook. They have the hook but there’s an emotional edge to each song. Are the lyrics strictly Ed MacFarlane’s or does everybody contribute to the lyrical content?
Ed generally does all the lyrics. But we’ve done a couple of things all together like “On Board” we wrote together. Bits of “Jump in the Pool,” the chorus was a group effort. But Ed generally does it. I think it’s fair enough, because he’s the one who sings it night after night. He may as well believe in it.

It seems as though all these awards have overshadowed you guys, particularly your loss of the Mercury Prize. You joke on your Web site about not losing much sleep over these things, but it has to mean something to you to be nominated. Does it matter really? Or are you already jaded by awards?
I think genuinely, not in a kind of snotty way, but we’re generally not that bothered really. The first few times you’re nominated for an award, it’s really exciting. You get to dress up in some smart clothes and then go and have dinner and spot loads of famous people. Get really drunk on the wine that endlessly turns up at your table. After you’ve done it, you’ve kind of done it. I think for us the Mercury Prize was pretty special, because it’s one of those things that you grow up hearing about and you’re interested in. I remember when I was a teenager there being all this hype about it and who’s going to win; who your money is on. It’s a big talking point. About the others—it’s really nice to be nominated. 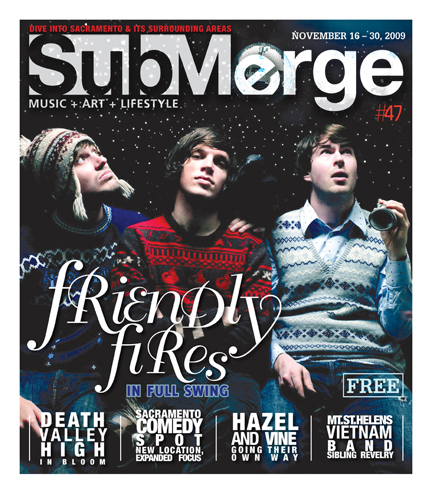 Friendly Fires will played alongside The xx at the University Union Ballroom on the campus of Sacramento State on Nov. 24, 2009.