The Sound of Arriving 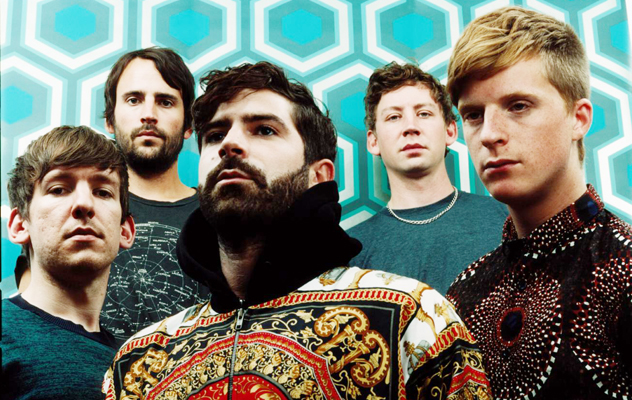 With the release of their third full-length album Holy Fire, Oxford, England-based rock quintet Foals have shown immense growth as a band, proving they have more diversity in their sound than most critics and reviewers thought possible. Much more ballsy and hard-edged than Foals’ 2010 sophomore album Total Life Forever and especially more mature sounding than their 2008 debut Antidotes (which has since become sort of a relic), Holy Fire is the band’s most direct and focused work to date. As their official bio puts it, “This is the sound of Foals arriving.”

“We’re definitely not the same band that we were when we were making Antidotes,” admits singer/guitarist Yannis Philippakis in a recent interview with Submerge. “It’s definitely been a process of us growing up through each record, so I’d expect them to be different. It keeps it fresh for us. It’s a constant evolution. What we sound like is the five of us making music, but it’s not in a definable box. All three records have been quite different, yet I feel that there is something consistent to the three of them. There is something identifiably us about each of the records.”

With an intense couple years of touring ahead of them playing sold-out club shows and giant festivals all over the world, Philippakis took some time to chat with Submerge over the phone from Zurich, Switzerland, in anticipation of their April 20 Sacramento show at Ace of Spades, just one day after the band plays Coachella.

Leading up to the release of Holy Fire, I was shocked to hear how heavy and gritty the first single “Inhaler” was. Then when “My Number” dropped, I was equally thrown off by how polished, clean and dance-y it was. What was the thought process behind releasing those two contrasting tracks first?
Just to throw people off the scent, really. I guess to show the diversity in the record. Definitely putting out “Inhaler” was the kind of thing where we relish in surprising people and being unpredictable to some extent. I think it was the song that we felt was the furthest from what had come before. And then “My Number,” you know, it was just the second song released, there wasn’t a particular tactic. I think it’s good to show people the scope of the record.

It keeps listeners off guard and seems like it’s a fun way to make it playful.
Yeah, exactly, playfulness is the right word. It keeps things exciting. It makes it feel less like you’re putting a product out and it actually becomes more psychological I guess.

Quite a few parts on the new album have a sticky, swampy, sort of delta-vibe to them. Where did that come from?
I think it came from different vantage points. One of the formative experiences was recording in Sydney, outside. We were in a studio, and it wasn’t really gelling. It just felt unnatural to be in a dark room while it was gorgeous weather outside, so we relocated to a river house. I think being surrounded by the natural environment and by insects in particular, things just sounded different in that environment. We felt it was an inspiring way to textualize the songs. It also similarly came from an imaginary understanding of things like the Delta and the Bayou, like old Alan Lomax recordings. You can smell the sweat on a lot of old blues and gospel recordings. There is a zealous energy to it. It just seeped into our pores basically, and it started to become what subliminally we were trying to achieve on certain tracks.

How was it working with Flood and Alan Moulder, two people who produced and engineered some of your favorite albums growing up?
It was great. It definitely brought stability to the recording process. There was a trust there. We were working with these elder statesmen of the British recording business, you know? It brought a balance. It made us feel content and confident. It turned the volume down on the neurosis that sometimes plagued our experiences of making records before.

Holy Fire has been out for a while now, and the reviews are all in. You’ve had time to breathe and sort of let things settle. What is it like to look back on it now? Relieved? Anxious to write new material?
I feel good about it. I feel like I kind of want to make another record already.

After the last two records did you immediately feel that urge?
Maybe not as much, but I don’t think it has anything to do with this specific record. At the moment I’ve got kind of an impulsive urge to produce more. Maybe in some ways it’s the pressure of the time that it takes, you know? It takes two years to tour and write. I want to be able to spend more time creating and then releasing quicker—not such a retracted period. There is such a long build up before we actually get to put music out into the world. A little of it is coming from that. But in terms of how I feel, I feel good about the record. It is what it is. It is a document of where we were at the time, and I think it sounds great. I have no real urge to re-do the record, I just want to make another one. I want to write the next paragraph in the book.

I thought I read somewhere that you said you have one more album in you lyrically. Still think that holds true?
I can’t say for sure, but I definitely have one more, then we’ll have to see. I feel like musically speaking we could write music and instrumentals, like riffs and pieces of music, for a long time. I don’t think there’s any kind of cap on that. I’m just not sure lyrically if I can… Trying to write songs is a different task. I definitely feel like I’ve got enough right now to do one more, but it just depends I guess on the life experience I have in the next two years. I feel like there’s a trap in contentedness. You slow down, you start to enjoy cooking, you have a pleasantly moderate social life, everything gets comfortable. And then that booming desire to spend all of your time working on music and trying to get yourself mentally into a place where you can write songs that you feel are meaningful is something that maybe the inclinations for it lessen. What I don’t want to do is make music without…I don’t want to do it for applause, or for money, or for security. I just want to feel like I’ve got some burning desire to make something and to say something. So, it depends.

The last time you were in the States you had a weird experience in Detroit, right? What can you tell me about that day on tour?
We had been touring for a while, and we got to Detroit. It was just a special moment. I felt something in that city, and I’ve felt it every time I’ve been there. But I had a specific encounter with a street drummer named Larry. He and I hung out for a little while and he was playing these incredible drum rudiments, real precision drumming but on a couple of trashcans. We got high together, and it was just kind of a semi-spiritual moment.

That’s pretty cool. Were you just out wandering the streets?
Yeah, kind of. We had played the show and it was great, it was fun. I just crossed the road and I could hear the sound of him drumming. I followed the sound. I was kind of entranced by it. Then you know there’s like these burnt out tenements behind him and the whole thing was just very surreal. For a middle class boy from England, to be in that sort of environment, the experience is just sort of a special one for me.

You and Larry are from two totally different worlds yet music, more specifically the rhythms that drew you to him, were sort of your guys’ common ground.
Yeah, exactly. There was just a real beauty to the way that he was playing, and that was kind of all he had on him were these two trashcans and some drumsticks.

Maybe Yannis will run into a Sacramento street performer and have another semi-spiritual tour moment when his band Foals hits Ace of Spades on Saturday, April 20, 2013. Locals Cold Eskimo and Desario will open the show. Doors open at 7 p.m. and all ages are welcome. Hit up Dimple Records, The Beat or http://aceofspadessac.com/ for tickets. Foals will also be at Dimple Records on Arden at 2 p.m. on April 20 for an in-store performance and signing.