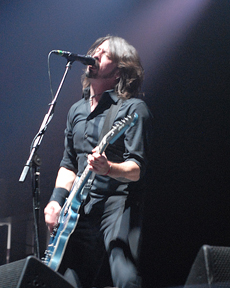 Twelve red semi trucks lined the northeast corner of the parking lot of Power Balance Pavilion on Tuesday, Nov. 1, offering a glimpse at the amount of gear this monstrous rock tour, featuring one of the world’s biggest bands, had traveled with into town. 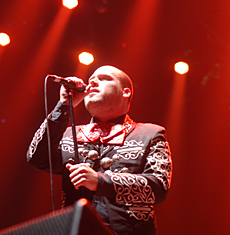 Upon walking into the arena just before the opening band started, one couldn’t help but notice a giant runway extending from the stage all the way to the back of the general admission floor area that created a rift between the crowd. And since this wasn’t a fashion show, it was apparent that someone would eventually rock the shit out of that runway and the mini-stage at the end of it. My money was on Dave Grohl. But first, Mariachi El Bronx took to the stage, all eight of them, and dazzled the crowd with their impressive and upbeat set. Mariachi El Bronx is the alter-ego of esteemed Southern California punk band The Bronx, and everything about them is authentic, from their instruments and their sound right down to their charro suits. They played to an ever-growing crowd, maybe two or three thousand (an usher informed Submerge he’d been told to expect 10,000-plus in attendance) scattered throughout the arena, most shoveling nachos or pounding over-priced beers. 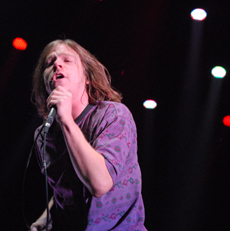 Serving as main support to the Foo was Cage the Elephant, best known for radio hits like “Ain’t No Rest for the Wicked” and “Shake Me Down.” Lead singer Matt Shultz convulsed around the stage, shaggy long hair in his face, very Kurt Cobain-esque. He even flung himself off the stage a couple times, clearing the barriers (a solid seven- or eight-foot gap) into the crowd, resulting in some of the most Jesus-like crowd surfing possible. Overall, Cage the Elephant’s set was heavier than one might expect having only been exposed to the band’s more radio-friendly vibe. Their heads were down the whole time as they charged through their surprisingly scream-y and edgy sounding set. Definitely a punk-rock-meets-grunge sort of vibe, and Sacramento was into it. 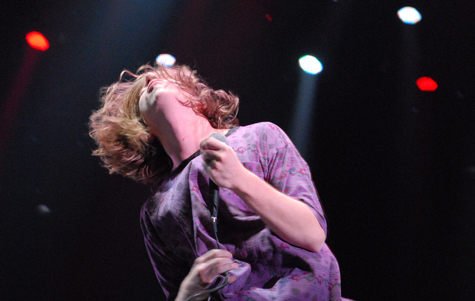 At 9:03 p.m. the lights dimmed again and Foo Fighters burst into “Bridge Burning” and then “Rope” back-to-back, the first two tracks off of the band’s seventh studio album, Wasting Light, released on April 12 of this year. What followed was an onslaught of songs (over two dozen total, including a five-song encore) delivered with gut-wrenching passion. “My Hero” was played early on in the nearly three-hour set and Foo Fighters’ charismatic frontman Dave Grohl ran up and down the rock runway for the first time, shredding on his guitar and screaming in the faces of fans. During the same song, he incited a massive sing along and slowed the song down, then moments later they finished it off heavy-as-hell again. They had the crowd in their hands, taking the place from rocking and chaotic to mellow and serene, to rocking again in a split second. “I just want to make sure you understand you’re not going home early,” Grohl told the now-entranced crowd. “Get comfortable, you’re gonna be here a long fucking time.” People went apeshit.

After ripping through another 10 or so songs, including crowd favorites “Breakout” and “Monkey Wrench,” as well as a guitar solo-off between Grohl and fellow guitarist Chris Shiflett (during the song “Stacked Actors”), where Grohl was standing on the mini-stage at the end of the runway that had now been lifted a good 15 feet off the ground, the two faced each other down from opposite ends of the arena. It was impressive and fun to watch, but it drew a four-minute song into what felt like half an hour. Drummer Taylor Hawkins also squeezed in an impressive but maybe excessive solo at the tail end of one of the songs. Submerge would have liked to have seen some of the filler cut and replaced with B-sides from old albums. But, it was an amazing performance nonetheless and it’s safe to say the audience got its money’s worth. Grohl even put a local touch on the massive show. “I dated a girl from Sacramento,” he announced at one point, speaking in reference to professional snowboarder Tina Basich, who is from here. The two dated years ago. He apologized for taking so long to make it back to Sacramento, “It’s been eight years?” he said. “I’m sorry. We’ve been practicing for tonight.” 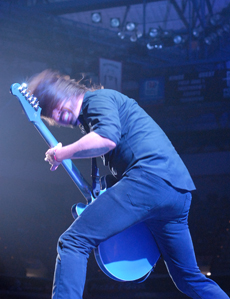 During their encore, Grohl first appeared with just an acoustic guitar to play a song called “Wheels.” “It’s big in Germany,” Grohl exclaimed. “If you’re louder than the Germans…” he said as the crowd sweltered. “OK, we’ll play a bunch more songs.” Grohl played a couple more acoustic songs, “Best of You” and a cover of The Beatles’ “Blackbird.” “Times Like These” started out with just Grohl on stage, asking the crowd to sing along, but halfway through, the full band kicked in, bringing the energy in the building back up to a boiling point. After blazing through the track “Dear Rosemary” and a cover of Tom Petty’s “Breakdown,” Foo Fighters closed the epic set with their smash hit “Everlong.” It was nearly midnight when the last note (more like feedback) rung out, well past most of the crowd’s bedtime, but you won’t find anyone complaining. Unless, that is, they have to wait another eight years to rock ‘til midnight with Foo.