The County Sounds Off 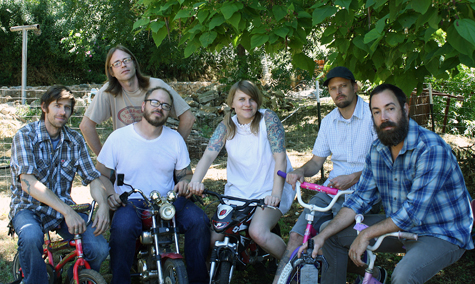 Forever Goldrush’s Amador Frequency finally gets the release it deserves

A phone call with a record label was all it took to breathe life back into a local band that has been indefinitely on hold for the past nine years.

If you were around Sacramento during the late ‘90s, you might remember a band called Forever Goldrush. The alt-country outfit was making a name for itself on the local scene, starting with the self-released album Unknown Territory in 1997. They released their second album Halo in My Backpack with Cargo Records in 1998. By 2002 they had toured everywhere west of the Mississippi River and were recording songs for their third album, which was completed, but never officially released, and the band started to lose momentum.

For starters, they couldn’t find a label to put out the record. The album received major interest, but nothing came of it. And touring had become overwhelming, setting the band up for burnout.

Without further ado, the band members went their separate ways. Vocalist Damon Wyckoff moved back to Amador County while the rest joined other local bands like the Regulars, Soft Science and the English Singles. That was until about three or four months ago, when they received a long-awaited phone call. After nine years, Sacramento record label Test Pattern Records called and said they wanted to put out the album.

Submerge met with Cale and bassist Mason DeMusey to talk about the resurrected album, Amador Frequency, which is due for its release on Aug. 2, 2011. It is a compilation pulled from 30-plus songs the band recorded over a span of six to eight months in 2002.

Cale and DeMusey agree that period was marked by musical exploration and experimentation, an explanation they offer for Amador Frequency’s unique sound. The limits of their musical palate were endless; they were soaking up the likes of Barcelona, Sigur Ros, Merzbow, Whiskey Town and ELO. Not to mention the fact their lead guitarist, Josh Lacey, had just left the band, leaving Wyckoff, Cale and DeMusey to do without while producing the majority of the album.

Thus the project quickly became a matter of figuring out how to creatively write songs without a lead guitarist. Turn up the synths and the noise guitars, according to Cale.

Amador Frequency is an entirely different package compared to FG’s prior two albums, Cale said, both of which were very roots-oriented and Americana. The band’s four original members grew up in Amador County, and since the band’s beginnings, “the County” has borne a heavy influence on defining the style of their songs. Lyrically, this album is no different, and songs like “Disconnected” and “Skeleton Keys” still retain considerable twang. But the album is rife with pop appeal, from its opening lighthearted number “Honey I Do” to “Rodeo Boys” and “The Letters.” Pearly synths highlight songs like “Silver Sweethearts,” while “Under the Apple Tree” and “Cup ‘o’ Gold” borderline shoegaze with glittering distortion and wizzing synths.

Nine years later and the band plans to record six more songs that will be different from the rest. Lacey has returned from North Carolina to record and play the album release show in August, the first Sacramento gig the band will have played since its one-time reunion show at Old Ironsides in 2007.

What hasn’t changed is the band’s ability to fly by the seat of its pants. Beyond the Aug. 2 show and recording at Radio Star recording studio this September, there are no set plans.

“Who knows what happens after that,” Cale said. “All this just sort of happened because Test Pattern showed interest in putting out the record, so now we’re just acting like a normal band.”

In what ways is [Amador Frequency] such a mass departure [from the other albums]?
Tony Cale: I don’t know, that whole period was a sort of sonic exploration, really.
Mason DeMusey: We were just pushing ourselves to be creative without [Lacey], and that’s actually pretty much what Amador Frequency ended up being.
TC: We were kind of dealing with a formula that we couldn’t complete, really, because we didn’t have all the components.
MD: Try to stretch our songs without guitar solos.
TC: Or just how much twang can you pull out of a dirge-y noise pop number or something like that? So it was sort of just a free-for-all, easily one of the loosest musical experiences of my life.

From what I’ve read, you’ve gotten comparisons anywhere from Creedence to Lynryd Skynryd, and of course, with the vocals, Eddie Vedder. Do you guys feel like these are very accurate?
MD: The first recording kind of stands on its own as a very alt, very, very country album. And, are those fair comparisons? I would ask a listener. Because I don’t think Skynryd is a very fair comparison to our first record and our territory. We’re not that southern pride.
TC: I like Lynyrd Skynryd.
MD: I do too! Don’t get me wrong, I like Lynyrd Skynyrd, but I don’t think that’s too fair of a comparison. Like I said, the first album actually was a lot more country than what Amador Frequency is now, and that’s part of the transition–where we were, and where we’re going now. But it’s fair enough in the respect that it’s very country. Banjo, mandolin, it’s okie. Pedal steel, you know.

So it looks like it had originally been contemplated for the album to be called Northern California, but then that changed?
TC: For Amador Frequency? Yeah there were definitely different titles going around…
MD: Yeah, I don’t know, I remember Amador Frequency just sticking to that record since the inception.

Would you say that because that was the theme of the album?
MD: Yeah, with a lot of Damon’s songwriting, again, since we grew up there, a lot of his writing is about these experiences growing up in a rural community, and so we kind of wear that on our sleeves all the time.
TC: When I first met these guys, they were flying the Amador flag really hard. I had never hung out with dudes that were so into their own county in my life, like just completely committed. Even though they were all down here working and doing their thing in the big city and shit like that…
MD: [Laughs] Yeah this was the big city!
TC: All they would do is talk about “the County.”
MD: That’s what us kids call it. Amador, we call it “the County.”

People have to be pretty excited right now, right? That a band that’s been gone for a while is just coming back?
MD: I would hope so, I mean, tickets went on sale today. I think that a lot of what’s motivating me, personally, is just the excitement I’m getting from these guys and from everybody else. And it’s been amazing. I mean, I called Josh, and I asked him if he wanted to come out here to do the CD release show just because it was such a great success and fun the last time I had him out here for the reunion show at Old Ironsides. And he basically told me that he’s been waiting for three years for this phone call.
TC: I mean, at the end of the day, it’s just really nice to be playing with these guys again, no matter what. I’m just really stoked that we get the opportunity to cut six more songs at the end of this summer. I mean, Amador Frequency, I hadn’t listened to that record in years, I’d forgotten about it. Just blew it off. I just thought it was one of those experiments. It may still very well be one of those experiments that…
MD: That fails horribly? But now we have the chance to find out.
TC: But if nothing else, I think the next two months is going to probably be some of the best two months Forever Goldrush has ever had.

Forever Goldrush’s Amador Frequency will be available from Test Pattern Records (Testpatternrecords.com) Aug. 2. The band will play a CD release show at Harlow’s in Sacramento on Aug. 12. Showtime is 9 p.m. and tickets ($9) can be purchased through Harlows.com.