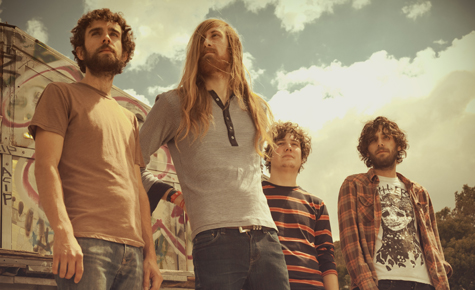 Forget rolling joints or slamming pills. Pop on a pair of headphones, shut your eyes and listen a while, and within minutes you are high as a kite. Meth huff? Easy. Coke snoot? No problem, just queue the track on your laptop. Wouldn’t it be nice if a high was as easy as paying 99 cents for an audio delivery of pure ecstasy?

In fact, the audio drug fad has recently caught media attention as parents debate whether or not “i-dosing” is in fact getting their children high. Communities in the Midwest have been particularly stressed about it, Ryan Grubbs, frontman of Sacramento’s psychedelic acid pop act Ganglians mentioned in a recent conversation with Submerge.

There was a sense of amusement in the way he described how genuinely terrified parents are by the thought their children might get hooked on ear-fed drugs. While the notion is laughable, the Montana native weighed in heavily on the effect music can have on the body, especially when it is delivered through headphones.

“We’re all guilty of listening to music on laptops and stuff,” he said.

But there is no musical experience that quite compares to an array of sounds streaming into each ear through a set of headphones, he added, creating a sort of vortex that almost feels paralyzing.

“There’s something about headphones [where] you can’t ignore the music, everything around you becomes part of the music rather than just being in the background.”

Rest assured, Ganglians are not looking to convert their listeners into junkies. Creating a setting, sometimes hallucinogenic or based on psychedelic experiences, however, plays a part in how the four band members (Grubbs, guitarist Kyle Hoover, drummer Alex Sowles and bassist Adrian Comenzind) write their songs.

Stereophonics, the encompassing delivery of sounds to each eardrum, is something that the four-piece has toyed with since the release of both their self-titled debut EP and full-length Monster Head Room in 2009.

Still Living, Ganglians’ next anticipated album via record labels Lefse and Souterrain Transmissions (in Europe), is no different.

The band released its first single, “Jungle,” in April 2011, accompanied by a tripped-out music video saturated with colors and Play-doh like prosthetics (which debuted in May), and quickly stirred an online buzz amongst music blogs and sites like Pitchfork and Fader. It was followed by the release of another single, “Sleep,” in July, made available for free download online.

The double LP comes out Aug. 23, 2011, giving Ganglians-lovers the chance to experience Still Living in its entirety. While Monster Head Room feels a bit more tribal and raw, Still Living is a dose of shimmering exultation, something like a joy ride. From the opening notes of “Drop the Act,” an anthemic call to arms to today’s apathetic youth, the album will keep listeners guessing from start to finish. Like Monster Head Room, it is peppered with subtle surprises–sounds of rain, panting, sirens, bats–staying true to the band’s ear-teasing tendencies. At the same time, Ganglians provides an album that’s more complex than its predecessors, venturing into R&B territory with “Things to Know,” a minimal composition of rumbling bass and Grubbs on vocals, and exploring heavier composition with the six-plus minute ballad “Bradley.”

Meanwhile, the band is preparing for their August tour, which starts along the West Coast on Aug. 10. Grubbs has been living in San Francisco, and with his return to Sacramento there is little time to waste being five months out of practice.

Still, this band is young, and jobs and living situations get in the way. Touring and putting out records was not something the band had expected during their early beginnings in the attic of a Sacramento house three-and-a-half years ago.

The fact that they have come this far by their mid-20s has been a surprise, or a “happy accident,” as Hoover put it.

Submerge spent an afternoon with three of the young four at Luigi’s Fungarden. Discussing the upcoming album, lo-fi and slacker-ism over beer, Sowles sat quietly while Grubbs and Kyle did most of the talking. The following is an excerpt from our conversation.

When I listened to Still Living I was feeling really elated. Do you have the same feeling when you’re playing your songs?
Ryan Grubbs: When we’re recording, there are moments of euphoria, and not necessarily dread, but uneasiness, uneasiness juxtaposed with euphoria. Yin and yang kind of stuff. Not trying to be too blissed out and not trying to be too depressed. It’s an album. You want people to experience a range of emotions.

Were any of the songs reflective of Sacramento living?
RG: Of course. And of people, and just day-to-day life. Struggles. First and foremost you’re trying to please yourself and experience yourself. And secondly you want to give your friends something. And then after that is the wide spectrum. You want everyone all and all, to find something there. You know, “Jungle”–it’s like the city of trees, it almost feels like a jungle but it’s kind of urban. “Sleep” is kind of about trying to escape day-to-day life by just sleeping, but then you have that voice in the back of your head that just throttles you out of it, like, “Hey, you got to make something. You can’t just like sit on the porch all day doing nothing.” They’re definitely reflective of the life living in Sacramento, for sure. I think that the whole ambiance of the album is very busy.

Alright, you can laugh at this question, but do you feel like your music represents your generation at all?
Kyle Hoover: In the sense of slacker-ism? There is a sense of underachievement, a little bit, every once in a while.
RG: Definitely. We are not trained musicians at all. We are not studio musicians. We just kind of picked up the instruments and tried to create what’s in our heads. But as far as this is music created for us, and for our friends, definitely. I mean that’s part of the reason I put “Drop the Act” in the beginning, because it’s kind of a half-hearted call to arms. Because I think I wrote the lyrics for that song after reading an article about the “twenty-somethings,” and I had never even thought about that point, but I thought, “Wow, they’re just choosing to drop out in bigger numbers than ever.” They just don’t want to be part of the system. They’re kind of just fed up with all the politics. They don’t want to participate at all. And that’s kind of what “Drop the Act,” the first song on the album, is just about not wanting to participate in that. And I think that a lot of people in our generation feel the same way.

When you guys are writing songs, how often are psychedelics part of your writing process?
RG: Never. Well just weed. The part that it is a process is in…
KH: Conceptualizing. Experiencing it and drawing from that experience and putting it in a song. But none of us ever get high and write music.
RG: Yeah, I tried it. “This is so amazing!” And then the next day, I was like, “What the fuck? Am I scratching a needle across the table?” But at the time it’s all-absorbing. There’s nothing else in the world that matters.
KH: I feel like as far as psychedelics influence goes in our music, it’s more constructing that feeling from your experience on psychedelics.

In a recent interview you expressed a desire to move away from the lo-fi garage scene and hope that Still Living accomplished that. Are you hoping to appeal to a different crowd?
KH: I don’t think we were ever trying to appeal to the lo-fi crowd in general. We never intended to be lo-fi. That’s why I get so mad when I read about that stuff in music journalism in general, because I feel like all these bands that we’re lumped in with and we sort of know, no one goes out of their way to make a bad-sounding record.
RG: I don’t know, there’s something that’s very rewarding about that kind of recording and I understand why I like lo-fi and why other people like lo-fi. There’s something about lo-fi, it’s just the perfect encapsulation of that moment you can’t tweak with. Whatever you have around you at the time, that’s what you’re going to do with it.
KH: But I think Monster Head Room was definitely intended to be a hi-fi record, it just wasn’t there. And then this was like, oh shit, we got the money and the studio to do it, let’s make a fucking clean record. A pop record. A meaningful pop record.

Still Living will be released through Lefse Records on Aug. 23. Go to Lefserecords.com for ordering information. You can check out Ganglians live at Luigi’s Fungarden on Aug. 10.