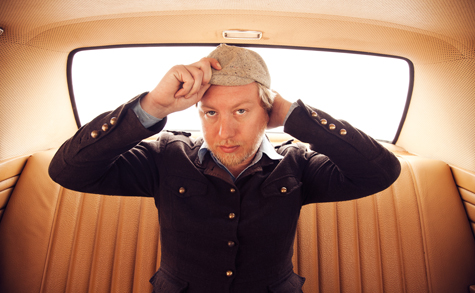 Envision sitting on a boat along a murky jungle river in a downpour of a storm in Guatemala, watching the river boat captain try to navigate the boat, except for the fact that he is lost.

But for semi-local songwriter Garrett Pierce, the moment could not have been more perfect.

“I just started laughing. It’s one of those epiphany moments where things that were built up from my time in San Francisco were just kind of built up and went down that water,” he remembers.

These are the heavy emotions that often play out in Pierce’s songs.

This October, Pierce is releasing a four-song collection on the EP Everybody Breaks under Narnack Records, which will be followed by his full-length City of Sands, which is set for release in January or February 2012.

Everybody Breaks is both melancholic and uplifting. At times it feels like reading a diary in the gray of winter. “In Silence” is sung over the sound of a warped organ, while “Shape Us Like Waves” is a rich composition in which Pierce sings, “We are people of the coast, so we know that the waves can break if we make it so,” in a dreary ode to the Bay.

What has been a constant is Pierce’s passion for writing. His musical beginnings were fostered in Southern California, starting when his dad bought him his first acoustic guitar around age 12.

“The first thing I did was write, which was very strange. He wanted me to take lessons and learn blues guitar, but I had no interest in shredding, I guess. I just wanted to write,” he said. “It hasn’t really changed since then.”

Growing up in what is considered either the armpit or artistic mecca of California, depending upon your outlook, Pierce has immersed himself into music from a young age.

First he went through a grunge phase that morphed into a hard rock phase by the time he joined a rock band in high school.

Pierce remembers when he first dabbled with writing acoustic-based songs after moving back to Los Angeles.

“Everybody was trying to be Jewel or John Mayer or something on the acoustic guitar, and it was a terrible time for me because I had all these songs. I just didn’t feel like I had an audience yet,” he said.

It was during this time that a friend invited Pierce to move to Davis to start playing music.

He laughed at the question and asked, “Why on Earth would I move from L.A. to Davis?”

As it turned out, he said it ended up being the best move of his life. He established his roots as a songwriter and connected with the likes of Davis experimental indie band Sholi as well as Michael Leahy, a KDVS host and founder of Crossbill Records, which would eventually put out Pierce’s first two albums, Like a Moth and All Masks.

“L.A. was not the place for me, there was just all these people trying to cut you record contracts down there,” he said.

Davis provided something that L.A. didn’t. There was a tight-knit musical community and he could play his songs where people would listen to him as a songwriter. And it was at this time that other lyrically creative, acoustic-based performers like Joanna Newsom and Devendra Banhart began to garner attention in the music world.

“That was just a totally great time to be playing music,” he said.

Nowadays, Pierce finds himself again adjusting to new territory, this time in Sonoma.

When Submerge caught up with Pierce over the phone, he had just gone for a five-mile run through the oaks and pines. 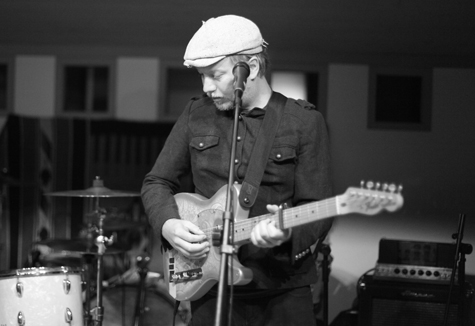 It sounds like you’re an advocate of having strong lyrical content.
Oh yeah, that’s the biggest thing for me. It doesn’t mean I don’t listen to music that doesn’t have lyrics. Thirty Three is one of my favorite bands, and they don’t have a singer. For me, it’s really important that people who are interested in my music think of it first as a lyrically based form, that writers are my biggest influences, taking from people like Steinbeck and Richard Wright, they are my biggest influences… Lyrics are huge, and shaping the right mood of the song around the lyrics is the most important thing.

Everybody Breaks struck a chord with me, both the EP as well as the song. You said some of these songs are older, but I was interested in knowing what you were feeling at the time you wrote “Everybody Breaks.”
That’s a tough one. I was talking to Nathan, our publicist, and just describing the songs to him, and I realized that the EP sounds pretty and it sounds uplifting even at times, but the lyrical content is on the darker side. I was thinking of long-term relationships and thinking about the body breaking down and all these dark feelings started coming together into one mass. I was listening to a lot of John Jacob Niles, an old soul folk singer, and my buddy who is Ellie Fortune, they both have this really nice, rootsy, folk guitar playing style. So I based the vibe of the song around this sparse guitar picking, and then the lyrics were just trying to lift me out of a funk of just thinking about the end of things.

And what about “A Bus in Africa?”
I was listening to NPR, and I heard this horrendous story, about–I think it took place in Uganda, if I’m correct–about this group of people in a bus who got pulled to the side by child soldiers, and pulled out of the bus and taken out at gunpoint, and people were put underneath the bus, and the bus driver was [forced] to get back in and run over the people, over and over. It was the most disturbing thing I had heard all year, and I couldn’t get it out my head, the image was terrifying to me.

For me, it’s harder to talk about those things sometimes. You don’t just want to bring it up in a conversation like that with your friends. So I take myself to a place where I can find out what was really happening in the minds of some of those people on the bus. It’s a first-person account, for some reason it’s the only way I could think to write it, and the chorus, like a lot of my songs, it’s not purely dark. The chorus has this amazing, positive chant, “That’s what love is for.” And it sounds very strange in juxtaposition to the lyrics that talk about these bandits that are killing everybody. But this person [has] this mantra of love for his family and why you need to have love so you don’t turn into these monsters that were taking the lives of people around them.

You were in an experimental noise band, 60 Watt Kid…
[Laughs] You have done some pretty good research. Where did you get that information from?

It’s amazing the things you find online. It looks like you were the drummer, and I listened to it, and I thought, “Man, what prompted this drastic change from you being in an experimental noise band to being a folk singer/songwriter?”
Well, actually those were concurrent. I was still playing plenty of solo stuff, but my whole goal when I moved to San Francisco was to be able to play my own music and kind of make a living from it… I just ran into them randomly at a bar in Oakland, and they said they were looking to hang out with new people and play music. He and this guy Derek had started this band 60 Watt Kid, and I invited them to play a couple shows with me. They were looking for a drummer, and I said, “Hey, I think I know how to play drums. And I’ll play with you guys until you find somebody.” And we just ended up clicking really well. The songs actually started more acoustic-based. We were like a lot of people at the time, we were listening to a lot of Animal Collective and it definitely showed in some of the earlier recordings. And then it just kind of got crazy… We would play characters on stage too, and dress up in sparkly weirdness. And I would kind of go caveman crazy on the drums. I was playing all four toms and a cymbal, and a tambourine around my ankle. It was not very complicated drumming, it was that caveman tribal stuff. It was so good to be physical, and we would break stuff and yell at each other’s faces. It was more Andy Kaufman, honestly. It was wild and it was so much better than standing with an acoustic guitar for me, for a little bit. It was a performance aspect I had missed since I was in rock bands in high school.

Garrett Pierce’s Everybody Breaks is out now on Narnack Records. He’ll celebrate the release in Sacramento on Oct. 21, 2011 at Bows & Arrows. Look for his new full-length album early next year.