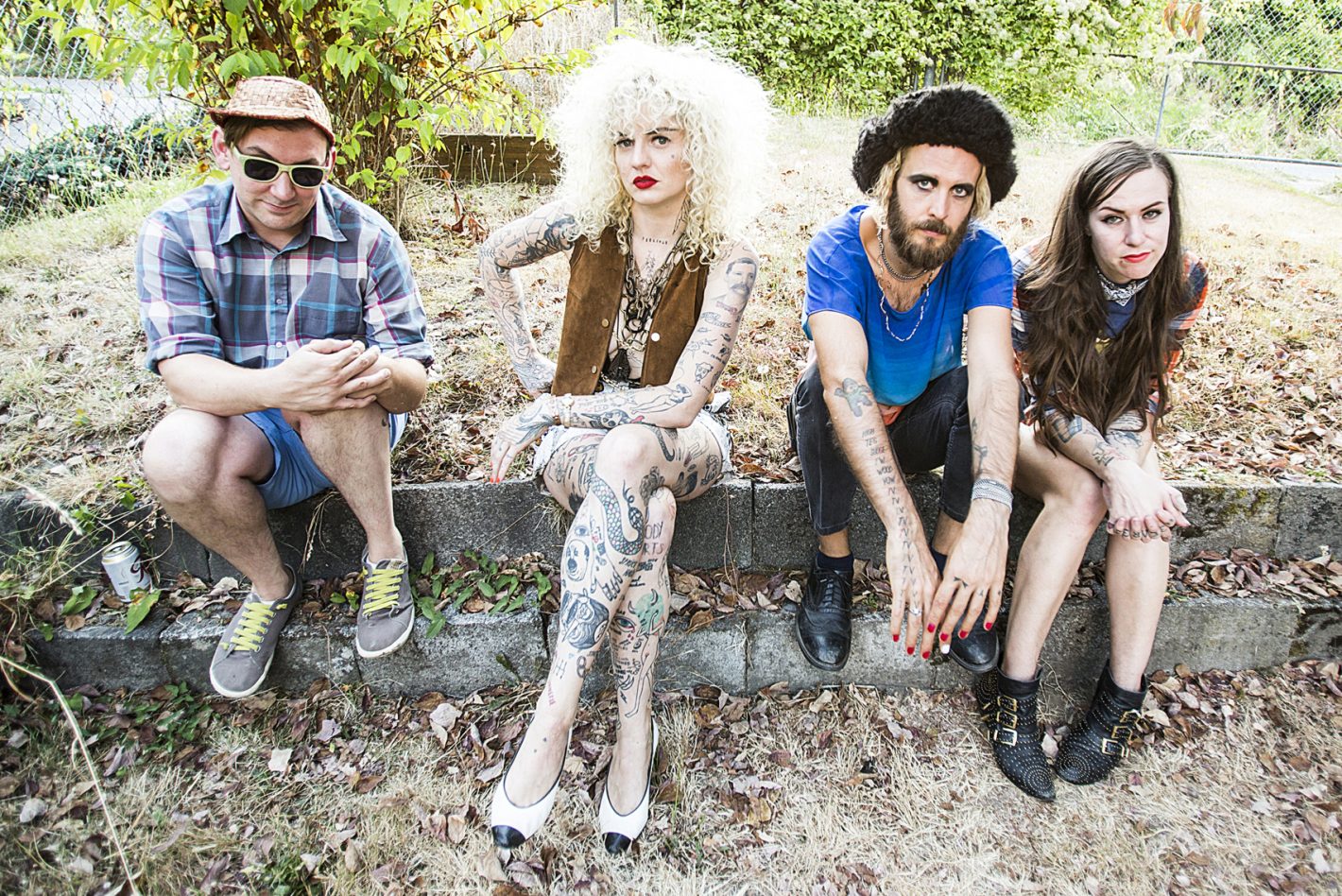 Get ready for a big fucking treat: Gazebos, a rad, genre-bending band from Seattle, touting themselves as “whoa-pop” (prog-punk could also be used) are coming to Blue Lamp on Jan. 17, 2017, with fellow Seattleites Boyfriends. Visiting Sacramento on their tour to promote their highly-acclaimed album on Hardly Art Records, Die Alone, you’ll want to catch Gazebos before they really blow up and you can’t see them in small clubs anymore.

Die Alone is not as depressing as the title would connote. In fact, it’s so much fun! Some songs are almost new wave-y, while others lean toward stony garage—but it’s all carefully woven together by seasoned musicians.

All in their mid-30s, each Gazebos member has been in a number of notable bands. Shannon Perry, the band’s blonde Afro-puffed lead singer, was in Dalmatians, Katherine Hepburn’s Voice and Butts prior to Gazebos. She’s also a sought-after tattoo artist with her own shop in Seattle. TV Coahran was in Holy Ghost Revival and Spurm, has collaborated with R. Stevie Moore and pursued a number of solo projects. Kimberly Morrison plays bass in Gazebos, and has been in more bands than we have room to name, but the most notable were The Duchess and the Duke and Universe People. Tyler Swan, their drummer, was in Truckasaurus and The (fake) Rolling Stones.

Coahran and Perry have known each other through the Seattle music scene forever. Coahran had written instrumental parts for Gazebos and was looking for a vocalist. Perry was excited to work with him because they didn’t have a lot of stylistic overlap. When the two got together, magic ensued.

Perry took a break from grocery shopping with her sister a couple days before Christmas to talk with us about the band, the album, her crazy ass outfits and how dying alone is a good thing.

What are some of the ideas you explore in Die Alone?
My general feeling all the time—and this has been in a lot of bands—is a sort of existential crisis. I feel like being on earth at all is very peculiar. And I talk about relationships and stuff, but the whole idea of Die Alone has been a year-long journey of me personally becoming OK with the idea of being completely self-sufficient. I think it can be disappointing to rely on other people and relationships to find happiness. You can be completely happy with yourself and without companionship. Not to say that relationships are bad—they’re wonderful—but if you can be completely content with dying alone, you will have more to offer yourself and to other people in human interaction. If you’re OK with being alone, no one can really fuck with you. You’re safe in a way. It’s not so bleak as it sounds.

What’s your band’s dynamic like in the studio or at practice, when you’re behind closed doors?
TV and I are the primary creatives. He arranges the instruments and a lot of the drums and bass, and I’m in charge of all vocal arrangements. It’s mostly him and I negotiating with each other, and all of us trying to crack as many jokes as possible. A few of us are stoners, so we’re goofballs. Unlike a lot of the bands I’ve been in where there’s a lot of drinking at practice, and we don’t drink at practice much and oftentimes practice in the early part of the day, so it’s focused. There’s always a lot of complicated parts and weird timing, it’s hard to play our songs. I think we all try to challenge ourselves to be the best that we can get away with and really push ourselves to be as good as we can, we like to be technically proficient. Although we goof off, we work hard.

The videos are super trippy and really rad. Who came up with the concepts for them?
There’s two we’ve done so far, one was by Carlos Lopez and one was by Colin Dawson. Carlos came up with the one that was for “Just Get High,” and I think he was trying to just make it as trippy as possible, and I wanted to address sexism and women getting the shorter end of the stick, so that was kind of a combination of Carlos and I sort of fleshing out that idea. As far as Colin’s video, which is more frame by frame, he built every frame, and we just said, we have nothing to do with this, go buckwild, and he just came up with it. We said do whatever you want, because we’ve seen his work before and it’s so peculiar on its own.

How many outfit changes went into the making of “I Don’t Want to Be Here?”
I don’t even know … I’m a person who is really into clothes. I dress like a freak every day. Whether it’s Monday or we’re shooting a music video, it’s like, the same exact outfit, even as I’m wearing right now, sitting in a grocery store talking to you. It’s part of my thing, it’s another part of that existential feeling that if we’re really stuck here on earth doing this, why not just be as decorative and fun as possible? I can’t understand any reason to not be living out loud when we’re all going to die.

What are you wearing right now? Sounds like a creepy question.
Well, yeah, it does. [laughs] I guess I’m wearing leopard print boots and a long sort of a … not a mumu? Sort of a long, amorphous, pink, psychedelic, nasty dress that’s vintage and a big white fur coat. I did really crazy makeup this morning that I sort of regret, but I’m just going with it. Because I’m out of town, and no one knows me here anyway.

Have you guys toured with Boyfriends before?
No, but they’re really good friends of ours, and we’re also really big fans of them. They were the first people we thought to ask. We just knew it would be so fun, and their music is cool and weird.

What are you looking forward to the most for the upcoming tour?
We haven’t done a West Coast tour before, and West Coast tours are the easiest thing when you live on the coast. We have friends in all those cities. I can’t believe we haven’t done it yet! I’m excited to show our coast our songs. We generally have a good reaction and it’s so fun to play live. We play in Seattle so much, and we want to show some strangers. You really let it all hang out when people haven’t seen you before.

What’s it like working with Hardly Art Records?
They were the first record label that I thought of when we were talking about shopping our album around. I love their roster, and they seem to be female-centric—there’s a lot of bands with ladies so I feel very at home there. And we’re buddies with all the bands on there. I don’t have a lot of experience with other labels, so I don’t have much basis for comparison. It’s definitely on the smaller side, but I feel like it’s so well-curated, and I feel very proud to be part of it. We hope to continue working with them on our next album.

Since we got the new lineup, we’ve been so reinvigorated. We’ve got at least four new songs right now that we’re currently able to play and three more demos in the works, we’re hoping to get another album together as soon as possible. We had some interpersonal issues with a couple old bandmates, and we sort of had to break up and reform, and didn’t get to promote Die Alone the way we had wanted to, so now we’re trying to make up for lost time and kick ass as much as we can. It was also really a priority for me to get another female in the band. As much as I can handle the dudes, it’s also always nice to have another lady there, for that knowing look of understanding.

How do you juggle being a tattoo artist and playing in a band?
I’m a single woman, and I’m 35, and I’ve been making art and music forever. I intend to be creative my entire life, but I’m probably going to have a kid in five years or something, so I work all the time. I like to have my day off or whatever, but I’m really passionate about working as hard as I can while I’ve got this. It makes me feel good.

Why do you play music?
I was raised playing music, I played piano, in the marching band and a number of different instruments. Music has always been a huge part of my life. I love art, but music makes you feel stuff. Music can make you cry. I can yell into the void. I’m an introverted person, and I know I don’t appear that way on stage, or to people who don’t know me on a very intimate level. But I suffer from a great deal of social anxiety, so it helps me to be on stage because I have tons of feelings and stuff I want to yell about, but you can’t just walk around in the streets doing that. So being on stage for me, is a chance to really get my inner self out in a performative way. It keeps me sane.

Catch Gazebos with special guests Boyfriends on Tuesday, Jan. 17 at Blue Lamp, located at 1400 Alhambra Blvd. in Sacramento. Doors for this 21-and-over show open at 8 p.m. and tickets are $10 in advance and $12 at the door. Find out more about Gazebos and listen to a stream of Die Alone at Gazebos.bandcamp.com.