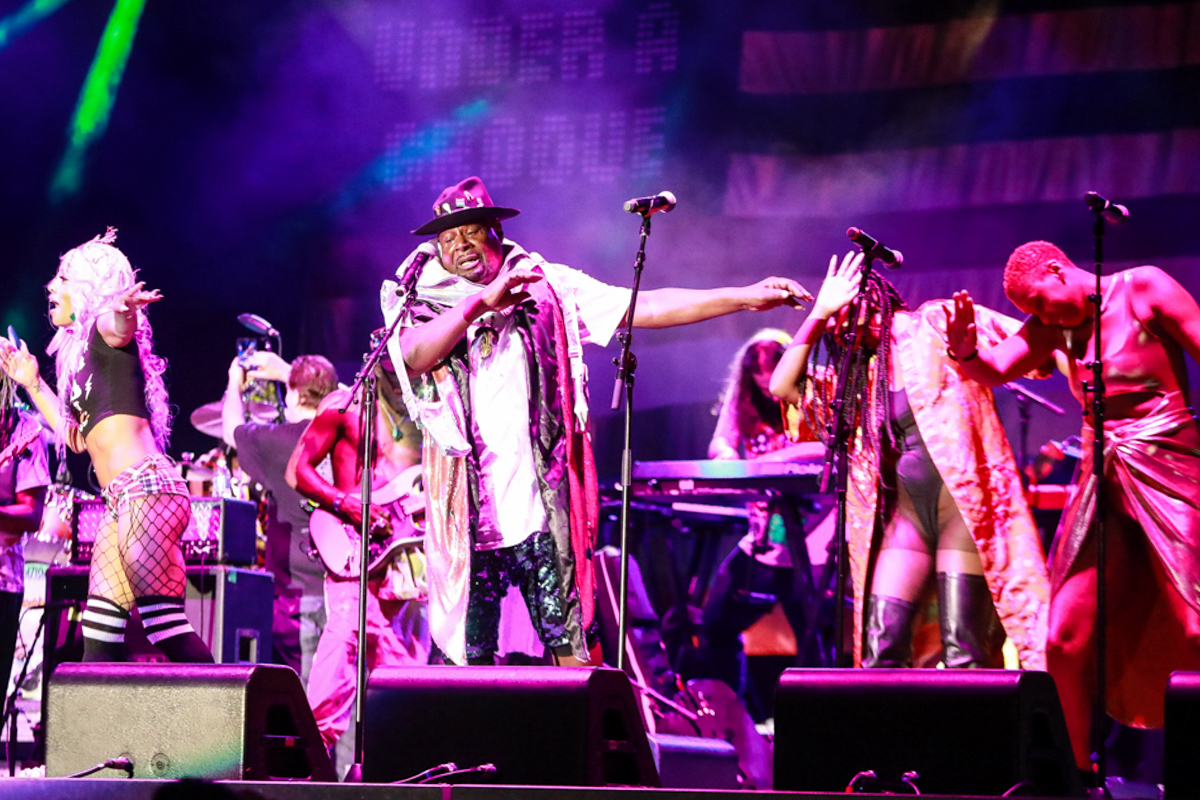 Words & Photos by Paul Piazza | Above: George Clinton and the the Parliament Funkadelic

I felt a sense of dread in the hot summer air on the drive out to Lincoln’s Thunder Valley on a recent Sunday afternoon. On this drive, troubling thoughts of the recent mass shootings that had taken place in our nation swirled.

I should have been filled with anticipation because the outdoor amphitheater was set to host the One Nation Under a Groove tour, which was slated to be the farewell tour for 78 year-old outer space funk cowboy George Clinton of Parliament Funkadelic fame. This was supposed to be a big, funky celebration with five great bands. On this day, I am certain I wasn’t the only one consumed by these thoughts.

The most pressing thought was what the hell is going on in the minds of these young, white males that is driving them to go on these hateful, racially motivated murderous sprees?

I reflected upon how when I was their age, my primary free time concern was going to parties and shows like this one and trying to meet young ladies of the same mind and have some funkin’ fun to music like this. Damn, I guess times have changed.

However, upon rolling up to the venue, I was greeted with the welcoming sight of beautiful humanity representing a melting pot of ethnicities, some young and some mature, many of them colorfully decked out, and all of them ready to shake off the negative emotions temporarily.

Clinton’s music has had a multi-generational impact on the world. He led a major shift in the evolution from Motown to the psychedelic soul and funk rock of the 1970s. His influence is vast, particularly in hip-hop. Samples of his sounds can be found in hip-hop from Public Enemy to Dr. Dre to Cypress Hill to Kendrick Lamar. Heck, Snoop Dogg practically launched his career on George Clinton samples.

During their ‘70s heyday, the Parliament Funkadelic bands featured legendary musicians like Bernie Worrell, Bootsy Collins, Fred Wesley and Maceo Parker just to name a few. Clinton masterfully pilfered musicians from the James Brown band in the early days, and eventually Parliament Funkadelic—or P-Funk as they came to be known—became their own entity. They revolutionized earlier iterations of soul and funk into what Clinton liked to call “hard funk.” They would fill the stage with dozens of players and dancers at their live shows, which could only be described as spectacle.

Clinton, who recently turned 78, was the charismatic leader of this group, known as “Dr. Funkenstein.” The stage shows mushroomed into a huge collaborative event every time they hit the stage, spawning hits like “Give up the Funk (Tear the Roof off the Sucker)” and “Flashlight.”

The band morphed with each album and tour, and peaked when they had a spaceship (The Mothership) that would descend onto the stage.

On this tour, however, things were scaled back. No Mothership would land this time around. The original prop is parked in the Smithsonian Museum.

For this celebration of funk and its funky offspring, Clinton had a variety of groups that were influenced by his brand. The raucous blues funk of Miss Velvet and the Blue Wolf kicked things off in the afternoon heat, followed by New Orleans’ Dumpstaphunk, who really got it going with a slighter deeper groove and the double bass attack of Tony Hall and Nick Daniels III. The band also features funky New Orleans royalty in Ivan Neville (Aaron’s son) on keys/vocals and Ian Neville (son of the recently deceased Art). 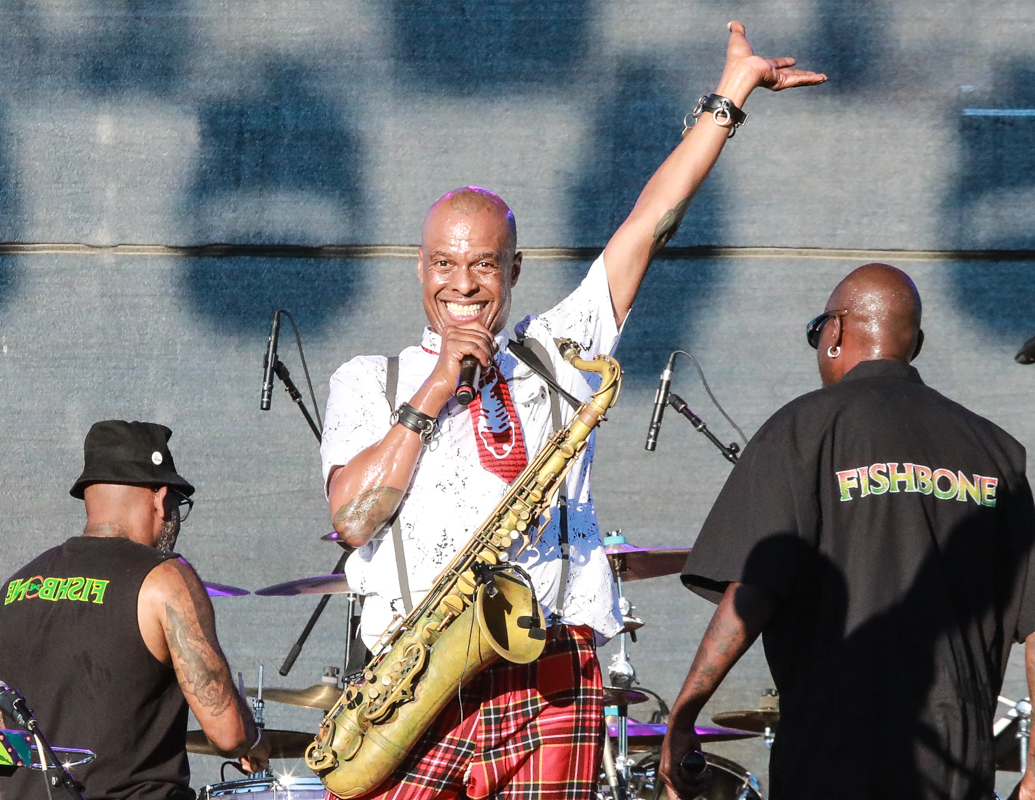 Next up were Fishbone, who had recently reunited most of their original members. While the band can surely funk, they chose to close with their epic ska tune “Party at Ground Zero,” which was great, but was lost on the crowd. They got everyone back with a “Fuck Racism” chant at the end. Ironically, their quirkiness is most aligned with Clinton’s unpredictable ethos.

Next up were Zapp, who go back to the funk generation that followed Parliament Funkadelic in the early 1980s. They knew exactly what to do with this crowd and had the whole place dancing and sweating with well-known hits like “More Bounce to the Ounce” as the sun went down and the temperature started to cool. 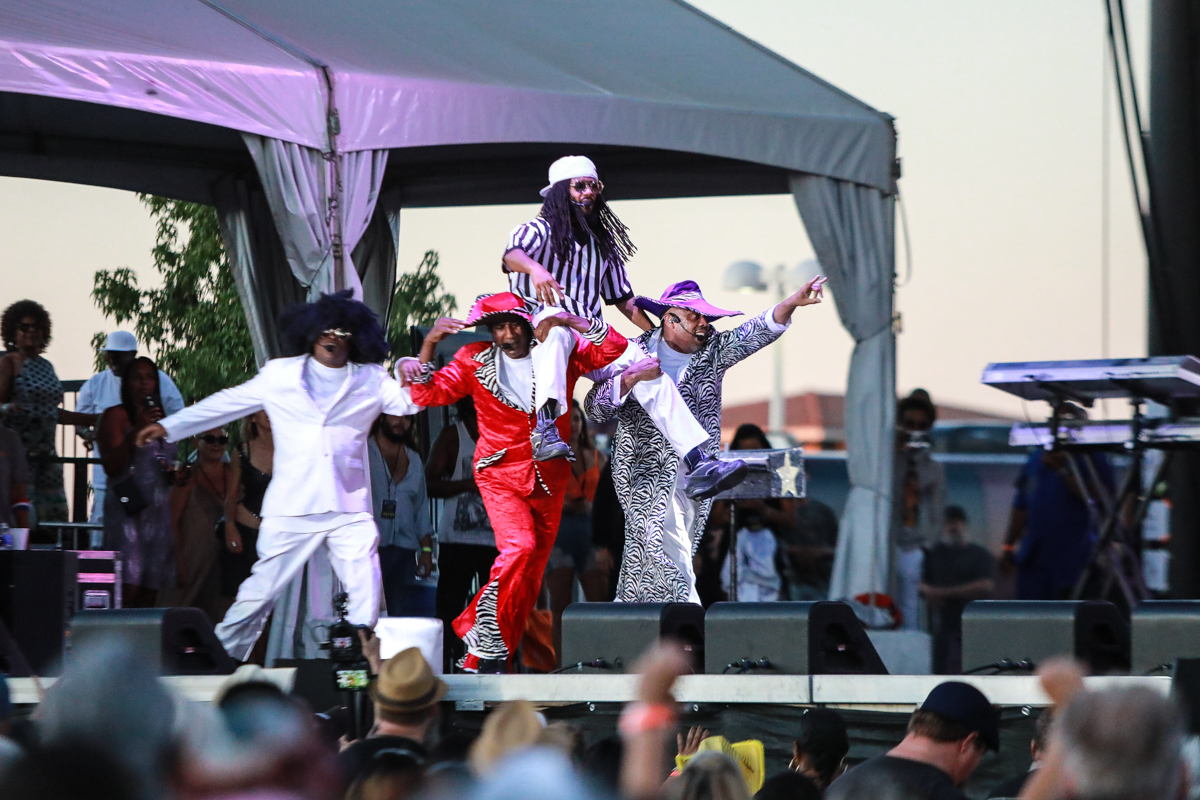 Finally, it was time for the headliner. Clinton hit the stage with a large band that vacillated between 15 and later something close to 40 people onstage at the end of the set. He directed the band, danced, dabbed and looked agile as they plowed through lengthy versions of “Night of the Thumpasorus Peoples” and “P-Funk (Wants to Get Funked Up).” Clinton stopped partying hard about 20 years ago and looks ageless at 78.

At times, he just stood there soaking it all in, or sitting on the drum riser letting others shine. Joining him onstage were his son Tracey and three of his grandchildren, who all displayed great talent. The future funk goal is to keep this family thing going.

As the show’s end neared, the band kept pouring it on with “Up for the Down Stroke” and “Mothership Connection” as more people joined the band onstage. Fishbone bassist Norwood Fisher came out and helped sing “Atomic Dog,” people danced harder and everyone tried to momentarily put the horrible events that had happened in this country 24 hours earlier out of their minds. For five or so hours in Lincoln, it was “One Nation Under a Groove” indeed. 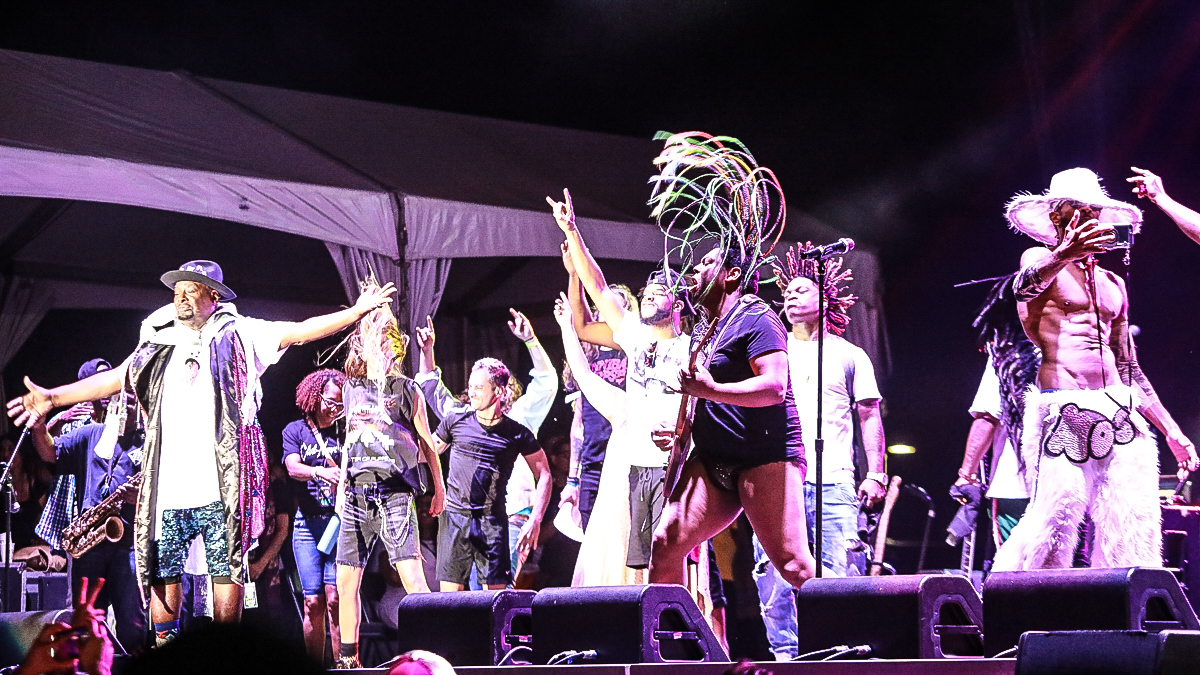