Getting Into the Mood

Alison Sudol leads A Fine Frenzy quietly into the spotlight

Alison Sudol’s soft voice creaked from the ear of my phone, sounding positively under the weather.

“I got really, really sick,” says Sudol with a cough after I ask her how the nationwide tour she’s on has been going.

“A really weird cold knocked me out and I had to cancel a show, which is rough. But I’m better at least. Besides that, everything is great,” Sudol says optimistically.

She called from a hotel room in Hoboken, N.J., which is right outside of New York City, where the next evening Sudol and her four-piece band would be performing songs from their new album, Bomb in a Birdcage, the followup to their 2007 breakthrough album, One Cell in a Sea. Sudol is the voice behind the Los Angeles-based indie-folk outfit A Fine Frenzy. With a recent spot on The Late Late Show with Craig Ferguson and a video for the single “Blow Away” that made it to the top 20 countdown on VH1 along with rotation on MTVU, Sudol shows no signs of a sophomore slump. While writing Bomb in a Birdcage, she and the rest of the musicians let things happen naturally just as they had with their previous record. There was no calculated process; no planning of the next move.

“I don’t really know what’s going to happen next. I just know that every little step of the journey leads to a final product,” says Sudol.

A Fine Frenzy’s journey is a bit of a fairy tale. A Virgin Records executive came to her house, sat on her couch and listened to a showcase by Sudol and her band. A few weeks later they were working together. Not exactly the grueling path that most musicians take to get a record deal, but sometimes if you’re just that good, then it’s just that easy. At the age of 24, Sudol has already established herself as a remarkable singer/songwriter with the piano chops to match. Her playing is the perfect accompaniment to her soft voice that sounds marvelous in every part of her range, from the quiet whispers to her robust hooks that climb along the scales. Musically, she’s wise beyond her years and has probably taken a tip or two from artists like Rufus Wainwright and Brandi Carlile, with whom she’s already toured. Her songs are poignant and emotionally charged. Bloggers and critics use words like “whimsical” and “pixie” to describe Sudol, but she’s no Tinkerbell. On Bomb in a Birdcage, she and her band wanted to let their hair down a bit and show that they also have a raucous side. Even on tour, their sound continues to evolve with the addition of electric guitar, an instrument that has sparked a new fascination for Sudol.

“I played it yesterday for the first time,” she says with a hint of glee in her voice. “I didn’t want to put it down. It created a monster and now I’m obsessed. In a quiet way.”

Bomb in a Birdcage, which is still fresh in new release displays at record stores around the country, will quickly be accompanied by an even newer release of the seasonal variety. A Fine Frenzy will release Oh Blue Christmas on Nov. 3. This six-song EP will be available at Target and will feature songs from Charlie Brown’s Christmas as well as three originals that were written and rehearsed inside the Sudol’s house this past summer.

“We were writing at night and I would put the fire on and stuff. It wasn’t very summery,” says Sudol about the mood required to write Christmas songs in the summertime. “There was so much energy and because we were playing it all at once and the way it was going down, it felt like Christmas.”

Christmas comes early this year when A Fine Frenzy makes a stop here in Sacramento at The Boardwalk on Nov. 13. In the meantime, throw another log on the fire and snuggle up to A Fine Frenzy.

You just released your sophomore album Bomb in a Birdcage that’s been doing quite well. Did you ever imagine or was it ever a concern that your next album would equal if not surpass the first?
I think that as an artist and as a person, whatever you do at that moment you want it to be better than what you did before. You want to have learned from the whole process and you want to take all that knowledge and the growth that you’ve made”¦and make something better. It was different in a sense that I made the first one [One Cell in a Sea] essentially in a vacuum. The idea that people were going to hear it was a foreign concept. This time, knowing that people would hear it—people who had bought the first album—there was a likely chance that they would buy the second one just to check it out, even. Just knowing that there was a built-in audience and ears on it before it was even out.

But did you have the mentality that you had to gain the respect of new fans while still maintaining the respect of the old ones?
Oh, well of course! I mean you’ve got to put out something good. You can’t think too much on it and worry too much; it’s counterproductive. Because once you start getting into the realm of trying to please people—I don’t actually know what pleases people except for being honest in music and trying to make stuff that I like to hear. That’s really the only gauge that I can trust at the end of the day. I mean, you never know if people are going to respond to that or not. Hopefully, as long as one is putting out something that one believes in with a wholehearted effort you can’t really go wrong there, because at least you know at the end of the day that you did your best.

You’ve said yourself that you’ve stretched your wings quite a bit more on this record in terms of what you can do sonically. Looking back, do you think you stretched enough? Too much? Do you see your songwriting getting louder and more electric seeing as how you’ve already proven you can woo the crowd with the more tender songs?
Actually, no. I never know which way I’m going to go until it starts going there, you know? I actually want to be more folk-y in my next endeavor, and quieter again. For me, it’s sort of more like a pendulum. I’m really quiet for long enough, and then I want to be really loud. Then I’m really loud and I want to be quiet.
Was it difficult to get into the right mind frame of writing and recording Christmas songs when it was the dead of summer?
You know, you’d think so. There was no doubt about what season it was. It was summer. It was hot. My house has the ability to feel quite Christmas-y year round. I live in like a seven dwarfs cottage, pretty much.

You made an effort to set the mood?
Yeah, I mean it wasn’t really an effort for that particular thing. That’s just how I like to be.I’m sort of a Christmas-year-round kind of a girl. Once I started getting into writing Christmas songs, they just fit into each other. I wouldn’t say it’s easy, because it’s definitely hard to write a Christmas song that doesn’t turn into total cheeseville.
I feel like opinions on Christmas songs are quite polarized. Either people want to gag when they hear them or they become tremendously sentimental and can’t wait until December to play them. I think the Charlie Brown Christmas album is something we can all agree on; was that a conscious decision? Choosing those songs?
The three songs that I chose for this—that we chose, because we really discussed it a lot as a band—were “Blue Christmas,” “Winter Wonderland” and the Charlie Brown Christmas song [“Christmas Time is Here”]. Each of them didn’t feel like the typical Christmas song and yet really personified Christmas for all of us in their own way. The Charlie Brown Christmas song, the hardest thing on that really was that it was done perfectly. Perfect. So we were like, “Wait. How are we going to do this without messing it up? It’s kind of hard not to go downhill from there.” But our version is quite different. The whole album is very much its own thing. Somehow, I don’t know how it happened, but somehow “Blue Christmas” sounds cheerful and “Winter Wonderland” sounds creepy. We just tried to put our own spin on it and bring out something different in the songs and tried not to make them gag-worthy. In the other songs, we do use some Christmas tricks, and there are definitely sleigh bells on here, but we tried not to use the typical Christmas shtick unless we did it 100 percent and did it knowingly. 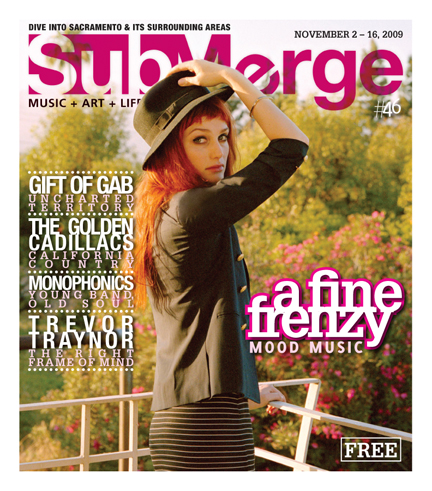 A Fine Frenzy will performed at The Boardwalk on Nov. 13. Oh Blue Christmas will be available exclusively at Target on Nov. 3.