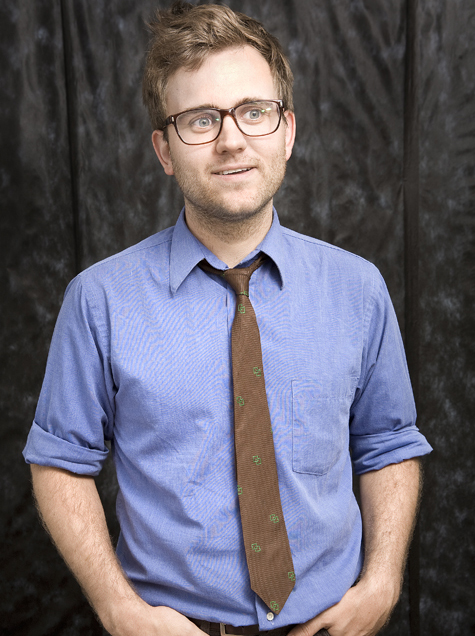 In the least dramatic of interpretations possible, Teddy Briggs would rather devote his time to creative outlets over the necessary habit of satisfying his stomach. While all your friends are becoming foodies, getting off on the exhilarating release of flavor, Briggs is busy denying himself sustenance while writing songs about being over food.

Appetite is the solo project of Teddy Briggs, drummer of What’s Up?. He totally understands the irony of his moniker, but it’s not deliberate. It just came together the way things do sometimes, much like the title of his new record, Scattered. Smothered. Covered. The inspiration for the title lies in Southern slang for how you like your hash brown potatoes. “I feel those words represent different ways I feel,” he said. “Covered, not meaning covered up, but meaning I’m covered, like, ‘You’re good.’ Feeling scattered and feeling smothered, but also feeling like you’ve got everything together is more or less the same thing. Those emotions are happening so often for me at the same time. It just spoke to me.”

Briggs discovered the slang while out to breakfast with a friend from the south in San Francisco. He told her during that meal his next album would bear the name. “Instead of trying to rethink it when the album was made, I stuck to that thought,” he said. “I think it’s very applicable to the record.”

One listen will confirm the applicability of the title, as Appetite drifts from the tropicalia vibes of “Warn Me, Right,” that might gather comparisons to the trend toward prep school-afrobeat, to the American-born indie stomp of “Tussy.” Appetite could get critical nod to contemporaries such as Sufjan Stevens, Vampire Weekend and Andrew Bird, but is by no means eating from their silver plates and sampling their wines. Scattered. Smothered. Covered. is far too mature and calculated for such novice missteps.

The first Appetite record, called The Ambiguous Garment, was released on Obstructive Vibrations, a local label run by Briggs’ band mate from What’s Up?, Robby Moncrieff. Unfortunately the label is in hibernation, as Moncrieff is engulfed in a multitude of projects, letting the website remain dormant. It’s excusable, considering Moncrieff recorded Briggs’ record, provided guidance in the studio and shopped it to a few labels who heard the record, but didn’t bite.

Briggs said he’s gotten positive feedback from people he said “don’t really owe me anything” and friends alike. He admitted to not pushing hard due to a lack of industry contacts, so for now it’s the DIY route. “I’m sick of not having anything at shows for people to take home,” he said, which is why Briggs is self-releasing Scattered. Smothered. Covered. on Bandcamp.com the day of his release show and bringing along CD-Rs to sell. “If someone wanted to do an actual release on a label, that’d be great,” he said. “But I’m not going to wait.”

Briggs considers Obstructive Vibrations more of a stepping stone for musicians than a label that is interested in career-building. It’s a fitting analogy, as his debut in comparison to Scattered. Smothered. Covered. is a weirdo introduction that garnered enough interest for Briggs to take the project seriously and tighten up the sound to a more mature level than freak-folk songs about crack for hippies. “All that old shit was pretty ambition-less,” he said. “It was just what I’d do for fun. At that point it was never a project that I really wanted to perform.”

Briggs is a drummer by trade, a trait that is denied in his work as Appetite. Briggs felt complimented when I expressed that the record did not sound as though it was made by a drummer–not trying to dis, but you won’t mistake Appetite for a Zach Hill side project. Briggs plays all the instruments on the record (recorded in five days at Hangar Studios), save for a few. “[Robby] was inspired by what I was doing live, which is super stripped-down,” Briggs said. “We left out the sound bytes and weird recordings. He was the one that kept me from putting in a fifth vocal track and said, ‘This is fine.’”

Now that Appetite is becoming a band meant for live interpretation, Briggs is coping with the adjustment of hearing someone else play his songs, kind of like a toned-down Brian Wilson mania. “Since I played everything, I have a very specific thought and sound I want it to be in my head,” he said. “That is just not going to happen with other people playing. I’m not saying they wouldn’t do their jobs and bring their own thing to the table, but it’s still an awkward feeling.” As serious as Briggs is taking Appetite, he’s not at a point of pressuring band mates to sign on in blood or even have the “are you in or are you out” conversation. “I think that’s better for everybody,” he said.

“Over Food” is the parting ballad on the album, which ties into the unplanned, yet undeniably heavy-handedness of Appetite’s food theme, a frustration that Briggs is quick to point out himself. “I have a weird relationship with food,” he said. “I enjoy food. I like the way it tastes. I also find eating to be a chore. You have to eat in order to continue being productive. Eating is fuel. I eat fast and get it done.”