Go ahead, take a bite 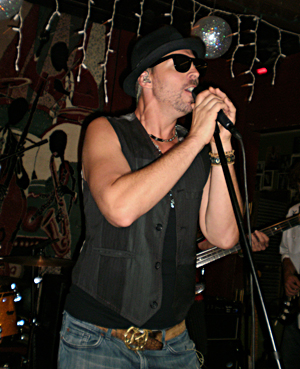 “Thank you for showing up early. It’s going to be a long night, and we can’t think of anything better than spending it with you,” announced Hans Eberbach, The Nibblers’ frontman.

A good 75 people were in the house at The Torch Club to hear the funk and soul grooves of The Nibblers, and it was only 9 o’clock (good thing I was on time!).

Eberbach is supremely cut out for his job, with a charismatic personality that was trumped only by his outfit. Donning a huge metal belt buckle that matched his chains that hung over his black tank top and vest, he peered out from behind a pair of black sunglasses as he approached the microphone to exhale his lyrics. Behind him, an eight-piece band was bangin’, strummin’ and blowin’.

A good funk tune is something of an aphrodisiac for the older crowd, apparently, because there were some love makers on the dance floor. The 35-to-60 crowd was out in full effect, and unlike the wallflower crowds seen all-too-often at dance and indie clubs, mom and dad can cut a rug. Not to say that I’m surprised, it’s just that I’m used to seeing young whippersnappers having a hard time walking from too many shots of Jameson, not from a recent hip replacement.

But I digress. The Nibblers are a solid band with members that have musical credentials as long as my arm. Jon Wood (guitar), Mike Palmer (bass) and Reggie Marks are of Mumbo Gumbo fame, and the very talented Ryan Robertson was sitting in on trumpet. All the elements to crush a set were in place, and the boys ran through a mix of originals and covers that you could tell were picked out very carefully. Songs like “Who’s Making Love to Your Old Lady” by the late Johnnie Taylor absolutely killed. One of my favorite covers of the night was a song called “Snatching It Back” by Clarence Carter. Eberbach smoothly and soulfully sang, “How can I get your love, when you keep on snatchin’ it back?” Great question. 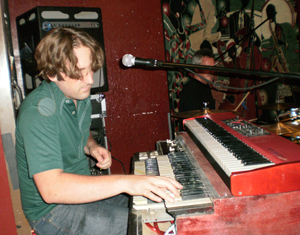 What really does it for me when I’m watching a funk/soul band like The Nibblers is the presence of the keys player. I don’t want to play favorites here, but damn, a solid keys player like Jeremy Spinger takes a good song, turns it upside down, shakes out all the contents of its pockets and leaves it red hot like an iron in the coals. I just want to shout like James Brown!

At the 11 o’clock hour it was standing room only with the head count up to a hefty 125. The boys took a well deserved break and then returned shortly after for a second set that they dared to have rival the first. James Brown covers set the tone and their list of originals was standout rather than filler. It’s clear these guys are real students of the genre and really take the time to weed through what seems like an endless pool of music that dominated the charts of the ‘60s and ‘70s. Their sets just feel good. It’s too much work at times to come to a show and have to be seriously concentrated on what’s going on. There’s a time and a place for that, but it feels nice to see a band like The Nibblers and the only thing to worry about is spilling your drink on the dance floor.