Music That Will Make You Hurt • Graves At Sea on Tour to Support Debut LP, 14 Years in the Making 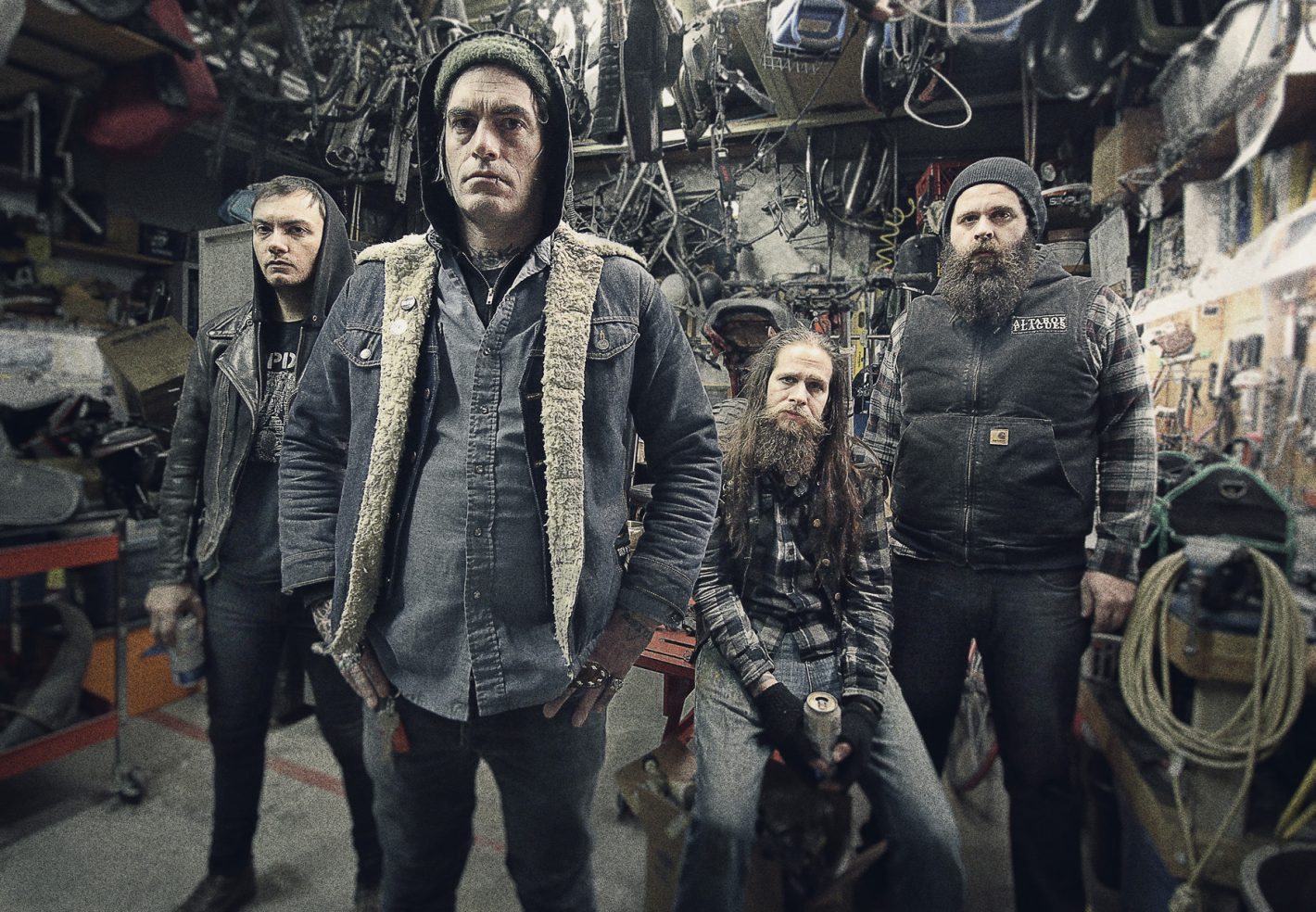 There are probably plenty of great reasons why Graves at Sea released their debut full-length, The Curse That Is, a scant 14 years after they formed. The Portland-by-way-of-Oakland sludge quartet did have a sizable hiatus from 2008 to 2012, when guitarist Nick Phit moved to the Pacific Northwest following the release of a few splits and a 7-inch single on Southern Lord Records. After that lengthy break, Phit started playing Graves material with a rhythm section in Portland. After some lineup changes, the band was solidified with Phit, founding vocalist Nathan Misterek and newcomers Jeff McGarrity on bass and Bryan Sours on drums. Misterek now lives in Germany, while the rest of the band dwells just outside of Portland.

“I don’t know what we are anymore, as far as where we’re based,” admits Phit. “For me, it was just time. I just missed my band.”

Once they reformed, the band found itself in the welcoming arms of Portland’s burgeoning heavy music underground, resulting in their 2014 EP This Place is Poison, released by the metal indie Eolian Empire. The Curse That Is was released by Relapse Records in April 2016.

“I guess it is weird,” admits Phit about their overdue debut. “But up til this point, we’ve never released more than two songs at a time, other than [2002 demo] Documents of Grief, which we never considered a full-length.”

For Phit, progressing at the needed pace was crucial to the creation of The Curse That Is.

“Since the band got back together, things were moving much too fast to take the time needed to write an entire full-length,” he says. “We eventually had to take most of a year off from playing shows just to focus on the writing process.”

Longtime fans of the Bay Area legends were pleased to hear that the finished product did not lack the band’s fabled ferocity, despite the daunting task of completing their first proper LP.

“This is what a Graves at Sea full-length sounds like,” says Phit.

The title track kicks the album off in ominous fashion, as roiling feedback lurks in the background just before a hammered-on riff introduces the beginning of a long and wailing road of doom-y dismay. At over 11 minutes long, “The Curse That Is” sets the stage for similarly epic scores of torment throughout the record. Probably the biggest musical element for the band lies in the nimble digits of lone guitarist Phit, whose affinities for both the churning, meditative riffs of Bay Area pioneers like Neurosis, and the choppy sensibilities of classic heavy metal conspire for brutally sludge-y grooves.

For proof, “Tempest” explodes with an evil syncopation, approximating the likely soundtrack to a Hessian death march. It’s worth noting that Graves at Sea revel in the kind of bleak cliché that lots of metal bands merely posture. Their official bio explains it the most succinctly: “This is music that will make you hurt.” The intricacies of their heaviness leave plenty of room for hyperbole, which is sort of the end-game for bands who feature guttural howling as a primary focus of their sound.

For Graves at Sea, despite the viciousness of their musical attack, there is a method to the madness.

“‘Curse’ was the first song we wrote for the album,” says Sours. “I was really proud of that song specifically, and it definitely set the scope of what the record should be. We wrote that song at least three times, and every version had a different structure or different feel to it. I remember it taking quite a long time to get to that final point, but feeling like we had accomplished something that we hadn’t done before with our songwriting. It pushed our whole process further, which in turn pushed the whole record further.”

Revealing a bit of a soft underbelly would not seem to go hand-in-hand with Graves at Sea’s oeuvre, but the band is not impervious to the bummers of life when their guards are down. Case in point is the emotive heaviness of “The Ashes Make Her Beautiful,” a song written in tribute to Misterek’s dog Akasha, who passed away while the band was on their first European tour in 2013. During the song’s finale, just beneath the busy textures of massive guitars emerge wistful string arrangements that cut the tension and add levels of tenderness that seem the antithesis to most of the rest of The Curse That Is.

“We couldn’t be back home when that happened and it tore Nathan apart,” explains Sours. “We wanted the song and the lyrics to convey the loss as accurately as possible. The violin additions brought the whole thing to life and added a depth that we couldn’t do by ourselves.”

Later, the eerie beauty of “Luna Lupus Venator” could throw the listener a bit of a curve-ball. Performed on acoustic guitar by Phit, the track is a revelation into the band’s raw talents, especially amongst the doom-y cascading of sound found throughout their catalog.

“We will definitely have more acoustic songs in the future,” says Phit. “But that doesn’t mean we’ll be straying away from what Graves is at its core.”

Other album standouts include “The Waco 177,” a song inspired by the 177 bikers who were arrested in May 2015 after a shootout in Waco, Texas, that killed nine people. The song’s brooding chord progression churns slowly, leaving ample space for Sours’ propulsive drum fills, and Misterek’s demonic vocals to spit, “The smell of burning rubber makes you feel alive,” offering solidarity for the perceived injustices committed during the incident.

“All of us have friends that were personally involved, wrongly persecuted, and whose lives were forever altered by that incident,” states Sours.

The band is headed out on the Cold Dead Hands Tour, which finds the band traveling up and down the West Coast through June, while Misterek is back from Berlin. Misterek’s new digs, as you might expect, hamper the band’s ability to tour much in the States these days.

“I doubt we’ll be back in Sacramento anytime soon,” admits Sours. “So catch us while you can …”

Graves at Sea headlines an epic night of heaviness on Friday, June 9, 2017, at the Starlite Lounge, located at 1517 21st St. in Sacramento. The 8 p.m. show, which also features CHRCH and Amarok, is 21-plus, with tickets $12 in advance or $15 at the door. For more info or to purchase tickets, check out Atlanteancollective.queueapp.com. Check out Graves at Sea’s album The Curse That Is below via the Bandcamp player. Keep up with the band on their official Facebook page.