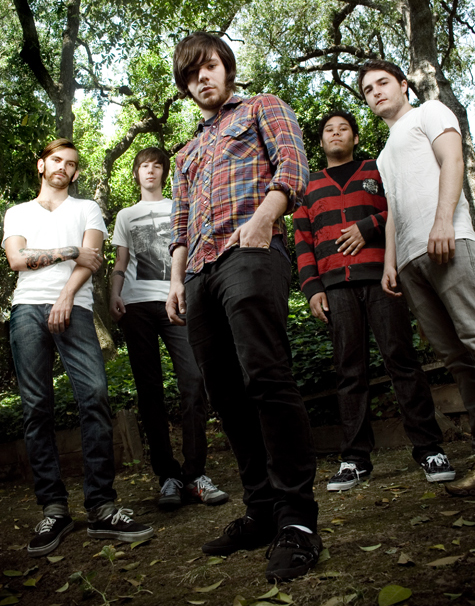 Dance Gavin Dance has seen more roster changes than an MLB team. It’s tough to pinpoint why the Sacramento-based post-hardcore band has had a tough time keeping members, but one thing is for certain: it never slows their tremendous momentum when someone leaves. If anything, it further fuels the fire lit within their fixated fans, who cause a ruckus on Myspace pages, Twitter updates and message boards. The band owes a lot of their success to the Internet and their young, tech-savvy fans who never hesitate to turn to their computers, iphones and Blackberrys to show their undying love (and, in many cases, hate) toward the band.

With their third full-length album (Happiness, due out June 9), a new lineup and the entire summer spent on Warped Tour to look forward to, the band seems very happy indeed with where they are. Submerge recently sat down with guitarist/co-vocalist Will Swan during a rare break from touring to chat about the new record, hitting the road and their dedicated, albeit crazy, fans.

I got a copy of Happiness to prep for this interview and I must say, it sounds a lot different than previous material.
It always does; every new record is way different than the one before.

Is that something you go for consciously?
I just want to write whatever comes out. Being the main writer, I try not to have an agenda. So every record, I feel, is just a natural progression. This is just what we were feeling at the time.

The guitars seem less distorted and sound much clearer. Can you talk about that?
We wanted to get a really clear tone so you can hear all the riffs. It’s more like a classic rock tone.

Rhythmically speaking, it seems groovier and almost dance-y at times too.
Yeah, I wrote “Don’t tell Dave”—it’s song number eight, the like, dance-funk song—while we were on tour with Senses Fail. I recorded the drums, bass and guitar. I just wanted to play it with the band [laughs] and they were down, so I taught them the song. It just kind of came together. I was really happy to be able to put it on the record. I have lots of funk influences; I like George Clinton a lot. There’s definitely a lot of funk that came through on this record.

You took over the screaming responsibilities after John Mess left the band. Is that something you’re comfortable with?
You know, at first I didn’t really like it. I’ve gotten a lot more comfortable and better at screaming. On the new record, being able to write my own parts and now being able to perform those songs, it’s a lot better feeling than playing someone else’s stuff.

Would you say Happiness is your best material to date?
Yeah, well of course, I always like new stuff [laughs]. I do hardcore comparisons between records. I feel like this one is the most cohesive vocally. Me and Kurt [Travis, lead vocals] worked together to try and come up with actual themes. We worked more together as one.

There’s one part on the record that really stood out. Who is that rapping halfway through the song, “Powder to the People?”
That’s me.

No way! It doesn’t sound like you at all. How did that idea come about?
Everyone keeps telling me that; I had to lay something over that song and I didn’t really know what yet. I got to the studio and our producer calls me and says, “I’m not going to be there for half an hour.” So I just sat there and listened to the song and thought, “What can I even do here? Rap might work!” So I just wrote the rap right there and when our producer got there I laid it down and he liked it. That song was already so weird I thought it would be cool to do something off the wall.

So you’re foreshadowing the next song?
Yeah, exactly. But kids online have no idea; they are all confused. Then “I’m Down with Brown Town,” the actual song, has another heroin reference; it’s like the heroin section of the CD. None of us have had a heroin problem, but we know people who have. Those songs kind of tie together both musically and lyrically.

You guys will be shooting a new video soon. What song will that be for and can you hint at the treatment?
Yeah, up in Portland. It’s for the song “Tree Village.” We’re doing all our stuff in one day, then there will be other shoots for the story while we’re not there. So we’re going to go up there and do what we got to do. The treatment for the video, I’m going to keep that under wraps. It’s a weird, kind of abstract treatment. It’s more visual; you’d have to experience it. Anything I said about it would just be like, “what the fuck?”

You’re doing a couple weeks with The Audition and Closure in Moscow leading up to Warped Tour. Are you looking forward to the summer?
Yeah, for sure. I cannot wait to go on Warped Tour. We’ve never done Warped. We played it once in Sacramento, on the Ernie Ball stage. It was fun; we had a good crowd. If we have a crowd like that every day, it would be great.
Your lineup has changed again recently. Are you confident it’s solid now?
Yeah, I think so. I always feel pretty solid about it, though. [laughs]

After perusing your Myspace comments, message boards, etc., I’ve come to the conclusion that you guys have some crazy fans. Why do you think so many people love to hate you guys?
[Laughs] The Internet is just a place for people to complain. They don’t even understand. I try not to pay attention to anything anyone says anymore. Our fans are so crazy. I cut my hair, because it’s getting hot you know? And I’ve been getting a ton of shit for it. Kids are like, “Why did you cut your hair?”

Yeah, you had quite the afro going on. So they’re missing it?
Yeah, they totally are!