Your Eyes May Deceive You 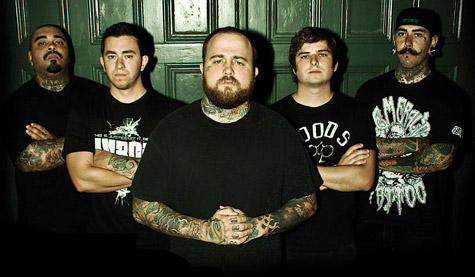 With a vision of creating a musical outfit, Havenside founder and vocalist Brandon Wells began the process of recruiting a group of musicians who shared the same desire of performing in a gritty hardcore metal band. In 2006, Havenside was born and began cutting its teeth with a full lineup intact. When asked about the inspiration for the name of the group, Wells mentioned, “I wanted a name that represented where the band was from. Before the band started, I was driving around one day and drove past Havenside Street in the Pocket area. I always liked the name and it stuck with me.”

Six years later the band remains in tact with a few lineup changes over the past few years. One thing crucial to Wells’ personal ethic is to let the music do the talking.

With two records already under its belt, the group has recently put out a third album, Nemesis. Released on prominent Sacramento-based hardcore metal label Westcoast Worldwide Records, the band drew inspiration by digging deep to describe pain, hatred and betrayal experienced in their lives. The rawness of Nemesis certainly speaks for itself. Songs such as “Dreamkiller” and “Vengeance” paint a graphic picture of how life can deal you a wicked hand and send a message that you must fight back at times in order to get what you want in this world. Guitarists Casey Mann and Nik Santos pump heavy down-tuned guitar riffs into the listeners’ dome, leaving your head banging on “Snake” and “Lowlife” while Wells’ mighty, aggressive vocals remain resonating in your mind.

Tour experience combined with sharing the stage with bands like Evergreen Terrace and Earth Crisis has most likely humbled the group, keeping its members focused on their goal of playing heavy music without compromising an ounce of intensity and aggression. Submerge sat down with Wells to discuss Havenside’s new album, trends in the hardcore music scene and finding a home at their record label.

What do you see as being some of the positive or negative trends in hardcore music today?
I’ve seen a lot of young kids thinking of hardcore as a trend. But in few places kids are getting back to the roots. Not worrying about the “image” as much as the music and brotherhood that is supposed to go with hardcore. Trends come and pass but it’s the true passion that some will stick with and always keep hardcore in their hearts. We hope that really stays around.

Where did you record the new album? Did the band try any new tricks in the studio this time around?
We recorded Nemesis at Castle Ultimate Studios in Oakland with Zach Ohren. On this record we went for a deeper intense sound than the last record. With the rhythm guitar, we ran a [Peavey] 5150 II head through a Marshall cab and with the lead guitar we ran a 5150 II through a vintage 4-by-12 Fender cab. We tried different things with the drums as far as where the microphones were positioned. We ended up using Ohren’s crash ride because it just sounded better on the recordings than Jaramia’s [Bond]. On the bass we decided to run through a DI and mic’d up an 8-by-10 Ampeg as well trying a mix between live and digital sound for the low tones. On vocals I went for a deeper yelling vocal style, contrary to the last album, to express a more angry and powerful sound than before.

Have you found your permanent home at Westcoast Worldwide?
Yes. We love it here. It’s a family. We all work together. You look out for each other; it’s what the hardcore music scene is about. Mikey Hood [label founder] pushes us to be a better band every day. He believed in us when no one did. We can’t thank him enough.

How has it been working with a veteran like Hood?
Great. He has been a great friend as well. He has been there for us through thick and thin. Shown us the ropes. He has been through it all on the road. So having a guy like Mikey Hood to keep us on target is amazing. We owe much respect to him and Westcoast Worldwide.

Do you have upcoming tour plans?
As of right now, no. We are taking care of some things at home that need attention at the moment. But hope to get back out on the road soon.

What is the most exciting show you’ve played and why?
I would have to say Conducting from the Grave’s music video show last year. Some kids were crowd surfing and bouncing on their heads. It was a wall of intensity.

What is the craziest thing you’ve witnessed at a show?
Our friend Mike jumped off the stage at the Conducting from the Grave show last year and somehow broke his ankle. It was so bad that the bone was sticking out!

What are the advantages/disadvantages of being a Sacramento based hardcore band?
The advantage is having the privilege to be involved in the Sacramento music scene. Sacramento has always been great to us. We love it here. I believe anywhere you’re from there are disadvantages of being in a hardcore band, you just have to work hard, look past all the bullshit, be yourself and be respectful to the fact we are all here doing what we love. Music has a power like no other. Support each other. I love hardcore music. It has been there for me on my darkest days and will always be there for me no matter what.

What song on Nemesis do you personally connect with the most? Why?
I’d have to say “Anguish.” There was a time in my life when everything was falling apart for me. I was drinking a lot, didn’t care how I treated others, made some wrong choices back then that I regret. Every time I hear the song it tells me that’s behind me. That song means a lot to me.

What are some of the biggest changes you’ve seen in the hardcore scene since Havenside began?
Well fewer kids are going to shows these days. Shows prices have become more expensive. I wish we had more $5 shows again. Venues have shut down left and right. So many bands are getting together and then breaking up six months down the road. There is a new band starting up every day in Sacramento that sounds exactly the same as the next band. All I have to say is do it for the love of music not to get popular at your school, or to look cool in front of your girlfriend. Find something else to do with your life if that’s the case. It’s making our scene look bad. Really take the time to make things work as a band first if this is what you want to do before playing shows.

Outside of music, what are your hobbies and influences?
I do Web design for bands/companies called BW Designs. I also do tattooing here and there. My mom is my biggest influence. I wouldn’t be the person I am today if it wasn’t for her.

What are some of the biggest misconceptions or stereotypes of the style of music you play?
Hardcore kids wear camouflage shorts and people thinking hardcore music is all about starting fights at shows, being the tough guy and that the music is always negative.

Havenside’s Nemesis CD release show will take place at The Boardwalk in Orangevale on April 27, 2012. Also performing will be Hoods, Hammerfist, Maya Over Eyes and Your Own Destroyer. Tickets are $10 in advance and doors open at 7 p.m. If you’d like to purchase a digital copy of Nemesis, go to http://vibedeck.com/havenside/nemesis.