The (Punk) Beat Goes On

The passive music listener can easily recognize punk music. Quick, driving rhythms, an undertone of chaos, and above all, a lot of fast emotional expression. The sound is as distinct as harmonica and lapsteel crooning out an old country tune or the synth-y blips bouncing out of electronica. But it takes an active music listener to take the next step and begin to differentiate between the sounds within a genre like punk, and find what makes each group unique. Groups like Fugazi, Minor Threat and Bad Religion all brought punk to the larger audience in the ‘80s and ‘90s, followed by more mainstream sensations like Green Day, and helped listeners begin to differentiate between styles like hardcore, pop-punk, post-punk and emo. It’s a strong community, full of diverse sounds and talented musicians like the Bay Area’s Heartsounds.

So, how do you describe Heartsounds’…sound?

“It’s faster and a little bit more going on than the punk you hear on the radio,” said Ben Murray, one of the guitarists and vocalists of Heartsounds.

The band started in 2009, with Ben Murray and Laura Nichol as the sole members. The duo wrote the first album, Until We Surrender, in Murray’s apartment. They began playing the material live, and shortly thereafter through the circuit of live shows and the punk community they met their future drummer Trey Derbes and bassist Kyle Camarillo (later replaced by Bobby Taul). Once formed as a full band, the foursome began touring frequently and started to gain momentum, which eventually led to being signed to Epitaph, who re-released the first album in 2010, along with their follow-up, Drifter, in 2011.The group gained popularity fast with their blend of metal-influenced technique and punk buoyant tempos, with both Murray and Nichol switching off singing lead; the sound of tight-knit electric guitar riffs seemingly scratching grooves in the airwaves for Murray and Nichol’s voices to flow evenly through.

“We’re a fast band… We play pretty fast, faster than most, [based on] ideas of punk bands you’d hear on the radio,” Murray said. “It’s faster and has the male and female vocal tradeoff. I feel it’s unique to us. Laura and I have a heavy metal background so there’s also a bit of technical precision focused riffs.”

The band has spent the last four years gaining a fanbase worldwide. Touring with bands like Strung Out, Heartsounds has made their way through Japan, Mexico, Europe and the United Kingdom and most recently Australia. Throughout the continents the audience response has varied, but remained positive.

“It’s definitely vastly different from one to another,” Murray said. “Some people are just more expressive than others. You play in Mexico City they go absolutely apeshit because they don’t get a lot of punk bands down there from the U.S., and Japan’s kind of the same way, but I feel like in Europe and the U.S. it’s a little more tame reactions.”

In the past, Heartsounds has received a lot of comparisons to ‘80s/’90s/early ‘00s punk icons like Hot Water Music and Bad Religion.

“Brett [Gurewitz] from Epitaph helped produce vocals for Drifter. There’s definitely a lot of Bad Religion influence; I love that band,” Murray said. “I’d compare it more to bands like Strung Out, bands that do a bit faster stuff that’s still really melodic.”

As the band has progressed and grown, the project still seems to be led with Murray at the helm.

“All the actual music writing is usually just done by me in my apartment,” Murray laughed.

Murray crafts the songs, then works the instrumental arrangements with Derbes, and the vocals with Nichol. 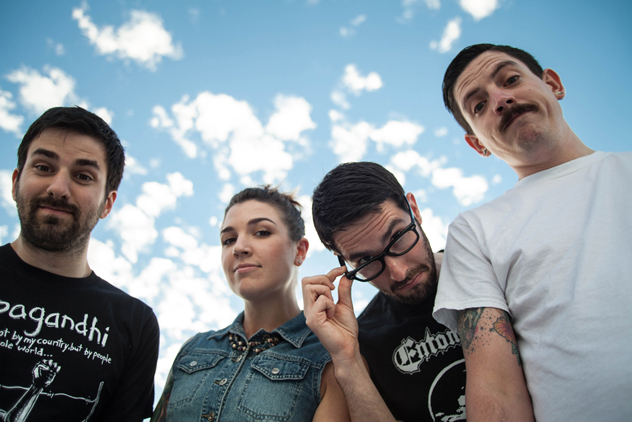 In the past, albums like Drifter had a much more distinct metal direction within the sound. For their newest release, Internal Eyes, the group tried to streamline the sound a bit and put more energy into simplified melodies.

“We tried to step it back for this one and concentrate more on the chord progressions and not having so many technical parts,” Murray said. “It’s just as emotional as the last two in terms of the lyrics and content, but this one I feel is a little more lighthearted.”

For Internal Eyes, the instrumental precision from the earlier material is still present, but there seems to be more space in the sound. The guitar riffs sound less linear and more melodic without losing their impressive quickness. Derbes’ drums still keep high adrenaline rhythm, but with more slight pauses that give the listener more time to catch up, and give the songs a more recognizable body.

Another conscious change Heartsounds made for the record was putting more emphasis on bringing the main vocals to the forefront of the songs, and equalling out the male/female vocal leads.

“We were more concerned with how the vocal melodies could be more dynamic and compelling. The one thing we did way differently on this record was the tradeoff between mine and Laura’s voices is a lot more frequent. In every song we’re pretty 50/50 on that.”

The band chose to release Internal Eyes through Murray’s own label, Creator-Destructor. Murray started the label as a side project, a way to release Heartsounds’ material and help friends out as well.

“It’s kind of just a fun project for me,” Murray said. “But it’s cool to be able to sustain it and keep putting out records, and putting out your own record is really nice… It’s kind of a labor of love.”

Murray does his part to help out the punk scene as a lot of other musicians do within the community, which is full of “a lot of tight knit bands,” Murray said.

“It’s cool because [the punk scene] doesn’t feel very judgmental or clique-y. I think a lot of bands get along with each other because they’re just punk bands, they can respect one another and be cool to each other. There’s not a lot of division within punk, which is super cool,” Murray said. “There’s no one gunning for massive success… They’re just doing their thing.” 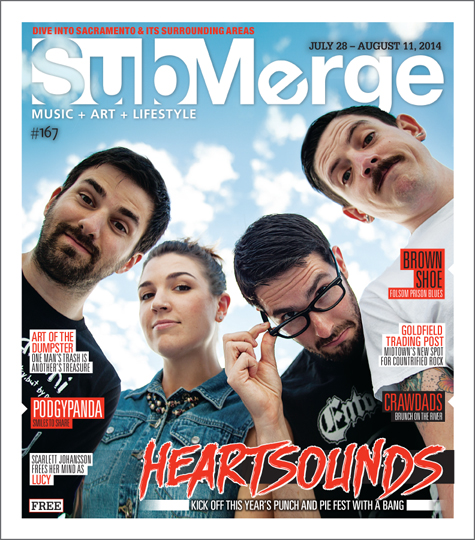 Heartsounds will be playing the third annual Punch and Pie Fest (Aug. 14–17, 2014), kicking off the event on Aug. 14 at The Press Club with The Civil War Rust, The Shell Corporation and D-Cent Jerks, who’ve made the trek from Puerto Rico. For a full list of bands and venues, check out Punchandpiefest.com. Internal Eyes can be purchased through Creator-destructor.com.