MEMBERS OF BLAME BETTY AND SECRETIONS FORM NEW BAND FOR ONE NIGHT ONLY? 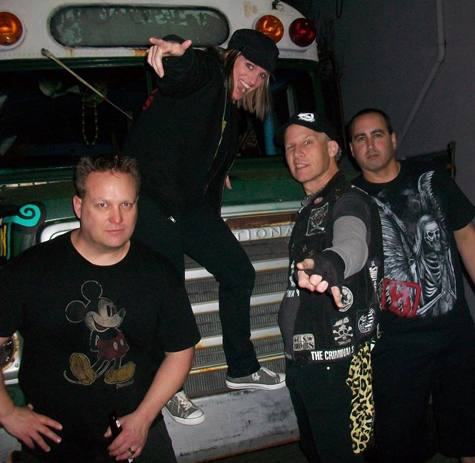 Chicks rock, man: Brooke Sobol and Jason Moniz, two members of the now defunct local punk-rock band Blame Betty, have teamed up with Mickie Rat of The Secretions and drummer Brian Young to form Hey Pretty Pretty, a brand new female-fronted pop-punk/rock group that came together with the intentions of playing one night only. “I’m a huge fan of The Dollyrots. I’ve kept in touch with their booker over the years,” Sobol recently told Submerge. “She contacted me recently to see if I could help secure a venue for a show for them. I hadn’t been in the scene a while, so I contacted Mickie, knowing he is also a Dollyrots fan, for help.” The two chatted and quickly came up with the idea to get a new group together to open the show. Within 24 hours they had the full band formed and the opening slot secured.

“Mickie and I nearly hooked up before when he had Rat-O-Matic going, but it was super fast punk and I am more the ‘punk light’ type so that wasn’t the right fit,” said Sobol. “Hey Pretty Pretty blends punk and rock ‘n’ roll nicely, so it’s a good fit for both of us.”

When Submerge pried a little more to see if there’s a possibility the project might extend past the one gig, she said, “So far, it’s a one-night-only show for us, but there’s no telling for sure. Anything’s possible.” Catch them with Los Angeles’ The Dollyrots, also a kick-ass, female-fronted rock group, on Friday, April 13, 2012 at Blue Lamp. Capt. Billy’s Whiz-Bang is also on the bill. Party kicks off at 9 p.m., $8 cover, 21-and-over only.