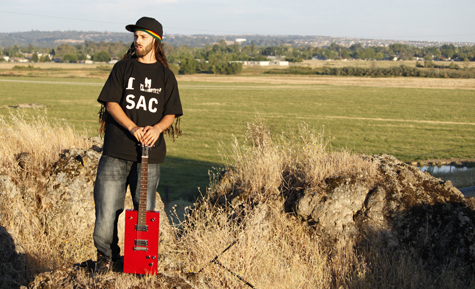 At first glance, J*Ras is a tall, friendly and relaxed looking guy with long brown dreadlocks. But after meeting him, you quickly learn he is a hardworking musician who takes on the roles of DJ, singer, rapper, multi-instrumentalist, producer, songwriter, husband and father. The hip-hop and reggae lover from SouLifted who has been in the music industry for more than a decade is ready to unleash his first solo album, City of Trees.

Unlike some mainstream hip-hop and reggae artist, J*Ras wants his music to serve as a call of awareness and individualism to people of all ages in the community.

“You can hear in a lot of the songs the message to be your own individual and keep going against the grain, doing your own thing,” said J*Ras, sitting on a chair in the green music lesson room at the ZuhG Life Store. “But that can also help to give them inspiration to get through things in life.”

When the Sacramento State alum travels and performs, he likes to bring the whole family with him, including his wife, Lady Grace from SouLifted and his two children. Even though his children might be considered youngsters they are already starting to follow in their dad’s footsteps. His 10-year-old son, Chase, is a songwriter and rapper and, according to his father, “tears it up” while performing on stage. His daughter Jossalin is only 2 years old but has to be given her own mini microphone at the live shows or else she will attempt to grab a mic from mom and dad.

“She was singing Bob Marley at a show the other day,” J*Ras said with a smile. “It’s just natural to her.”

On top of traveling with his family, J*Ras is active in the Auburn Hip-hop Congress, a local organization that provides youth with the opportunity and tools to help make a change in their society. At the nonprofit organization, J*Ras acts as the Artist Development Coordinator and works with and teaches young kids creative writing and the history of hip-hop.

“[We’re] working with the kids, giving them what we didn’t have when I was growing up in Auburn and that community, which is an outlet to express your creativity,” J*Ras explained.

Meeting up with him downtown at the ZuhG Life Store seemed like the perfect place to get to know J*Ras, since we were surrounded by music and art by local artists.

Your new album is City of Trees. I’m guessing that it’s about Sacramento?
Yeah, it’s a reference to Sacramento. That’s one of the tracks on the album… It just has to do with Sacramento kind of being overlooked and it’s really a good place to be. I don’t live in Sac right now. I moved to Grass Valley up in the hills. But I was born in Sac, went to Sacramento State, and I got to show love for Sacramento.

You are a very talented guy: a vocalist, a DJ, rapper, producer, basically everything. Did you have all of those roles with your new album?
Yeah, in the new album, I produced the whole album and I play the majority of instruments. There are guests from SouLifted: Brian Fleshman helped to produce some of the tunes, Steven Leonard played some of the guitar and bass. So, we did add some those elements from SouLifted. But I played pretty much everything on all of the tunes, even turntables. [I] do a lot of the vocals, besides some of the backing vocals. And there are some other guests on the album, including Prezident Brown, who is one of my favorite reggae artists, Soulmedic and Jahworks the Revolutionary. We do have a few guests on there but mainly this is just something that I’ve been working on for the last couple of years.

Do you have a certain theme that you are going for in the album, a certain meaning behind the lyrics?
We’ve always carried a positive message in the music. And with SouLifted, we’ve always had the music to lift you up. It’s conscious music with a message. It’s not just about the things that you normally hear in hip-hop music or even reggae. It’s things that you’re going through and how we struggle and how we overcome those things. One of the songs is called “Champ for Life,” and it’s really just a reflection of life and what’s got me here now. It kind of tells a story of where I’m at now. I guess the theme still would be conscious music that does have a message, a positive message for the people.

Do you have a target audience?
What I’ve always liked is that at our shows we always get people dancing. Whether they’re little kids that are 2 years old or the 80-year-old grandmas. And that’s what it’s all about, is getting the people involved. I work with the Auburn Hip-hop Congress as well, and it’s all about trying to help with the youth and giving the youth positive music that they can listen to. Not just the hip-hop that they’re hearing on the radio or the things that are out there easily accessible for them. It’s about giving them something with a message. Mainly our majority of listeners and my majority of listeners are college aged, a little bit of older. But the music is for everyone for sure.

What were some of the challenges working on your solo album–going from a big band to just you?
One of the main challenges is doing it myself and being so critical of my own music. Instead of being able to have that input from everybody to make it that collected thing. But that’s also given me the freedom to make it exactly how I want it. So some of those challenges also become strengths of the album. Mixing and mastering, just some of those fine tuning things, were probably the hardest challenges. It was so hard for me to be happy for where the album was, making it perfect.

What made you want to work on your own album?
I’ve played in multiple bands from Heart Life and Soul to SouLifted. I’ve always written my own music, and I have so many songs that haven’t been recorded because I focus so much energy on the band… I love that collective energy of the people when we unite. It’s just stronger and I love it, so really just kind of realizing where I am now and seeing what I need to put some energy into this solo album so I could really get it out there. I’ve been doing a lot more solo shows myself touring more and just trying to get the music out there. I knew that this was the next logical step in the progression. And having the ability to work with some of these reggae artists and other artists that I aspire to work with on my solo stuff [has] kind helped me push it and get the album out.

Do you see more solo work for your future?
Absolutely, we have a lot of projects going on, which is great and we are doing a lot of collaborations. Right now, I’m working on an album with Soulmedic and a lot of music with him. He is a great reggae artist out of the Nevada City area and Hawaii–he is kind of half and half. I’m also doing a tour with some of the artists from Thizz Nation, which is kind of funny, because it’s totally anti what our music is about. But they’re trying to bring that consciousness and educate some of the people and their audience. We got to try and reach every target audience we can. So, I’ll definitely be pretty busy doing some solo work, but I also hope to include some more SouLifted shows. And doing a lot of collaborations with artists, a lot of hip-hop artists in Sacramento and working with the Auburn Hip-Hop Congress right now a lot too.

I’ve read that you have been performing since 1999… over 10 years!
Yeah, that’s when I actually threw my first show. I was 15 years old and I got approached because we had been doing parties, where we just pull out in the woods and set up our turntables and generator. And so the word got out. We had a little hip-hop crew when I was still in high school and one of the local bars actually asked us to throw a show and that was in May in 1999. That was the first show that I threw myself, made the flier and all that, cutting stuff out, old school. It’s come a long way since then and we put a lot into it. I’m real happy with where I’m at now and where it’s moving along.

What is the best part of performing live?
The energy from the people. Just the feeling that I get from performing, it’s not like anything else. I know I’m meant to be doing that when I’m up there… And I love getting the people involved and the energy and getting that love back from all of the love that you put into the music.

J*Ras will celebrate the release of his solo album City of Trees at Sol Collective on April 29, 2011. Lady Grace, Task1ne and many others will also be on-hand. Expect special guests and some big surprises. The show is all-ages and gets underway at 8 p.m.