Photo above by Gabrielle Serra

Though It May Seem the World of Hardcore is Getting Nicer, Hoods is Just as Scary as Ever

I remember being at a Hoods show back in the ’90s, watching some unfortunate kid getting the shit kicked out of him. For some reason, I stood against the wall, laughing. The poor guy was really getting it bad—Doc Martens to the face and everything—and there I was, giggling like an idiot. That is, until a fist flew out of nowhere into my nose, snapping it clean in two. It must have been some sort of punk rock, karmic retribution. There was blood. Lots of blood. My white T-shirt turned crimson. Nobody came to my rescue. The show went on. I woke up the next morning, proudly sporting one of the most prolific black eyes I’d ever worn. I couldn’t breathe through my nose that had swelled up overnight three times its original size.

Those were the days. Hardcore isn’t like that anymore. Sure, there are some scary bands, but the live shows don’t seem to have as much rage. Maybe people aren’t as angry as they were 20 years ago. Back then, all we had was Sabrina, the Teenage Witch and dial-up Internet connections. We were pissed. The point is that Hoods is still a scary band, maybe even scarier now that singer/guitarist Mikey Hood started drinking and smoking a bunch of weed. In fact, the new album, Gato Negro (Spanish, I think, for “We’re old, but we’re still going to fuck you up”), is just as brutal as their debut Once Again and even heavier than the celebrated Victory Records release Pit Beast. Gato Negro teeters on the edge of metal and hardcore, but ends up somewhere along the lines of street punk. Songs like “Middle Class Wash Out” have just enough melody mixed with brutality to show listeners that these are musicians who know exactly how to make fucked up music that jumps out of nowhere, punches you in the face and breaks your nose when you least expect it. It’s the best kind of nostalgia.

I got a chance to talk with Hoods vocalist/guitarist Mikey Hood about his old venue Westcoast Worldwide, cutting hair, fighting, tours, and, of course, weed. Lots of weed. 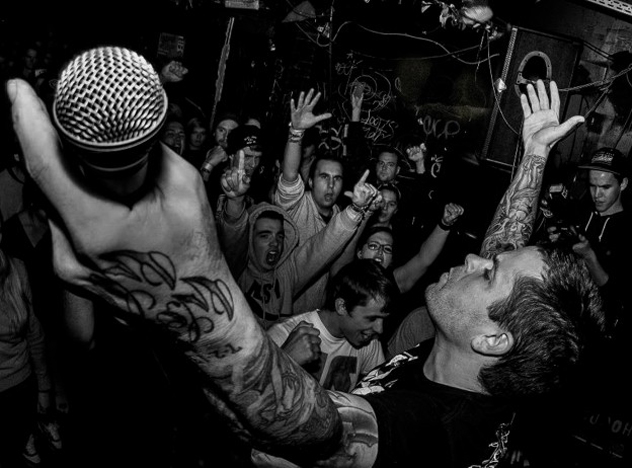 Hey.
Sorry it took so long to call you back, but we got home and got stoned and I was like, “Shit, I know I’m supposed to do something very important.”

Ah, the fucking weed. So do you miss Westcoast Worldwide?
Yeah, of course. We’re looking at opening a new one probably next year some time. It’s going to follow suit with rehearsal studios and stuff like that. I definitely want to do a live venue, but I want to do it with four or five people as a collective. Doing it all alone drains you. It’s like having an extra job on top of what you already have to do in life to make it.

What have you been up to the last few years?
We’ve been touring still. It’s just we haven’t been touring in the States. To play locally, people in your hometown don’t appreciate you as much as they do in other spots because they have the opportunity to see you. So we stopped playing all the time and then it started creating normal draws again. We did Europe for almost a month and we flew to [Philadelphia] and did Tsunami Fest and that was pretty cool. We played with Cro-Mags, Sick of it All, Obituary, All Out War.

Was it pretty crazy?
I missed it. I had an allergy attack, but everybody else loved it. I could hear it from the van. I made our set and then nearly collapsed.

Are kids different now at shows?
Yeah. Somewhat. The older dudes are still kind of nutters, but the younger kids … it’s more like a popular thing to be into hardcore now, as opposed to something you have a passion for. It’s cool to act tough when you don’t have to even be tough. You can just be a nice dude.

I used to be scared going to hardcore shows.
Now it’s kind of like a bunch of clowns doing karate moves. It doesn’t seem like they really feel it anymore. It’s kind of good it’s not as violent, but at the same time it took a lot of the realness out of it, I guess.

How was Europe?
Really good. We did 22 shows pretty much in 22 days. We played Finland, Germany, Belgium, Holland, Poland, Austria and we did a bunch of shows in France. The shows were really good, but the country’s a little bit suspect.

Why do you say that?
I don’t know, man. The kids at the show are cool, but when you have to deal with somebody in public they’re fucking assholes. As you go southwest, like to Bordeaux, the people are really cool, but some of the people in Paris and Marseille, they’re just really arrogant, man. If you ask them something in French, they’ll just look at you like you’re fucking stupid. It’s like, “I’m going to slap your fucking face with a baguette. You’re lucky I’m an American because if we didn’t help you in World War II, you’d be speaking German.”

So have you chilled out on your fighting ways?
Man, I didn’t know I really did get in a lot of fights.

Maybe it’s just a Sacramento legend. Those legends don’t even have to be true.
Dude. The thing is I haven’t been in a fight since—shit, no, actually can’t say that, but I haven’t tried to get in any fights in years. I don’t think we really ever started fights. I guess I was a little aggressive, but when I needed to be.

When did you start smoking weed?
Check it out, when I was 35, I was going to go back to college and try to finish up my A.A. degree. My friend’s like, “You gotta get this Adderall shit.” And I tried that shit and took it for three days. That shit kept me up for a fucking week. I got a lot done. I cleaned the house at least five or six times a day. I changed the oil in my car and sent all my old postage out. So it wasn’t a total loss I guess.

Then you started smoking weed?
Oh, yeah. I smoked weed for about five years. It’s funny, because everybody who knows is like, “You fucking hate hippies.” But actually I’m kind of a hippie. The only difference is I take showers and go to work and shit.

Do you ever smoke weed and trip out on your straight edge tattoos?
Oh, dude, no way, man. Straight edge shit’s cool, man. That shit kept me out of jail. Actually, if I was smoking weed, I probably wouldn’t have gotten in as much trouble, but it wouldn’t have been as fun. Yeah, so fuck it.

How’s your barber shop going?
That shit is fun as fuck. I like going to work. It’s a good job, too. You don’t get bored, man. You get like at least five to 10 dudes a day coming through all with different stories. Your day changes drastically from haircut-to-haircut. Most people hate their jobs. I actually like mine.

Let’s talk about your new album.
You already got a copy?

Yeah.
I honestly haven’t even heard the final product yet. I’m hella excited.

Well, it’s good.
I like that song “Gato Negro.” It’s the one we’re going to do a video for.

It’s got a cool melody.
It’s more like street punk-ish.

You know when you hear a new hardcore record and you’re worried that it’s going to be all soft and boring?
Oh yeah, this one had a while to bake in the oven. I’ve been writing some of these songs since Pit Beast came out. I’ve had about six of these songs for two years, at least, and then I kind of just rewrote them. I wrote a couple songs on the spot. I wrote the “Gato Negro” song on a “verse/chorus/verse/chorus/done” and we did it the next day in the studio and it’s like my favorite song off it. Sorry, I’m stoned. I’m getting off track. I think people are going to like it. And if they don’t I don’t care because my cats will like it.

What’s your most fucked up show story?
The tour was called Street Brutality Tour. It was Hoods, Shattered Realm and Donnybrook. It’s kind of like if you picked out the more thuggish kids in hardcore and put them on tour, this would be it. It was L.A., Sacramento, New Jersey, New York—so we covered pretty much every region. It was fucked up. There was a lot of tension that tour. To say the least, some kid got killed when we played at Skrappy’s in Tucson, Arizona. That was the same period when Dimebag Darrell had gotten shot on stage. I lost some friends that year. That made me not want to play music any more because when motherfuckers are coming to shows with AK-47s, that tough guy shit’s out the window. That’s when it gets really real. I don’t know about you, but I got shit to lose and I’m not trying to fuck around with being on some crew shit. It was stupid then, and it’s even stupider now.

Tell me about your walks that you take.
You’ve seen The Evil Dead, right?

Yeah.
You know when he’s walking out of the forest at the end and the thing comes and kills him?

Yeah.
The death walk is like that, but in the motherfucking pitch darkness. We get hella stoned. We get zombie, Cheech and Chong stoned and then we go on the death walks. You got to walk through. It’s maybe a third of a mile. It’s like a trail. There’s raspberry bushes and all this overgrowth shit. You can hear noises. There are some transients that live in there. So we call it the death walk. It’s pretty cool.

That sounds horrible.
Oh no. It’s healthy. You burn calories when you’re scared.

Hoods’ Gato Negro will be released Nov. 25, 2014, via Artery Recordings. Five days later (Nov. 30, 2014), you can celebrate its release at Blue Lamp. The show gets underway at 7 p.m. Check out Bluelampsacramento.com for more info. Mikey’s shop, True Blue Barber and Shave Parlour, is located at 1422 28th Street in Sacramento. Stop by and say hello! 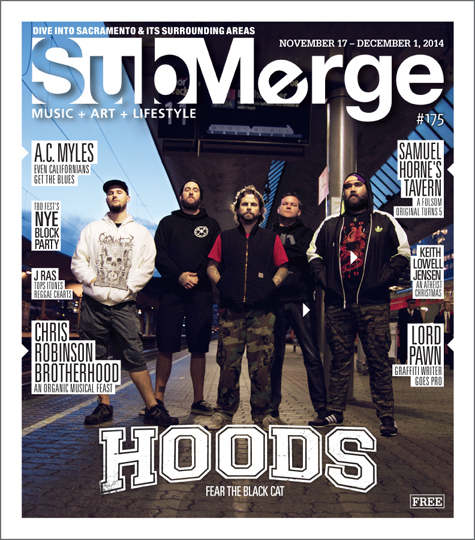