Horse Of A Different Color

Band of Horses releases Infinite Arms under a new face

When asked if he had any parting words at the end of our interview, Band of Horses keyboardist Ryan Monroe paused, chuckled a bit, then hesitantly replied, “I slept all day–and we’re about to sound-check with Pearl Jam.”

No tone of arrogance, no bafflement, just a light-hearted response, moments before he bid adieu on the phone. Mere days from the release of their much-anticipated third record, Infinite Arms, Band of Horses has recently begun their tour with Pearl Jam, placing them in mammoth venues like the Greek Theatre and Madison Square Garden. Touring arenas and amphitheaters like these is normally reserved for bands at an aged and veteran point in their successful journey, but Band of Horses is on the entirely opposite end of their timeline. They’re just now settling into their identity, one newly born. It’s been a slow growth spanning the last three albums, starting with elements as basic as the formation of the band’s current lineup, now consisting of Monroe, Ben Bridwell, Tyler Ramsey, Bill Reynolds and Creighton Barrett.

“Ben was trying to find the perfect band that he could live with,” Monroe explained. “We’re all family; that makes it super easy to collaborate, super easy to play on the same stage as someone you really love and respect.”

The two records prior were less of a band effort and more a product of Bridwell with guests coming in-and-out, including co-founder Matt Brooke, who left the group in 2006 to focus more on the equally impressive Grand Archives. Monroe himself joined in the beginning of 2007, toward the end of the writing process on Cease to Begin, in the midst of the five becoming a solid collective. The group searched for a sixth band member on-and-off for a couple years, but seem to have settled on their melodious troupe. Though their time together in Band of Horses is still short, the connections between the band mates go years back, in some cases to adolescence, whether it’s Bridwell and Monroe playing baseball together during grade school, or Barrett and Bridwell meeting as teens, gushing over their mutual adoration for Dinosaur Jr. This level of history between them gives a certain level of aged comfort to their dynamic.

Once the present unit had been defined, the five-piece decided to take to the making of Band of Horses’ third album, which unexpectedly became more of an extensive journey rather than a quick task.

“Initially we wanted to go into [Alabama] and knock out the record like, The Who or whatever; a week long, go in and knock the record out old-school style,” Monroe said.

The recording of Infinite Arms ended up elongating into a two-year process of bouncing in and out of the recording studio. The creation of the album coincided with the end of the Horses’ Sub Pop contract, at which they parted ways and were taken under the mighty wing of Columbia Records. However, simultaneous to joining a major label, Band of Horses decided to take a more DIY approach to the recording process and instead of having trusty producer Phil Ek step in, they opted to take the reins and produce a majority of the album themselves. With no outside parties to limit them, the Horses had the freedom to really stretch boundaries and take risks with their arrangements.

“I think we got away with some stuff on this record that a lot of producers wouldn’t allow,” Monroe said.

To take an even stronger grip of the album, Bridwell also decided to fund the recording process himself, which allowed for any instrumental curiosities or vocal experimentation to be seen through and toyed with.

“We tried everything, it was no pressure,” Monroe said.

In order to self-fund, the group had to take several pauses from the studio to gather cash by means of touring. This included spots with all-time greats like Neil Young and Willie Nelson, along with holding their own impressive sets at legendary joints like Carnegie Hall, all the while popping back into the studio for brief sessions. This back-and-forth became a regular pattern.

“There’s no telling. We’d play live for two weeks, then two weeks in the studio, so I don’t know, seven or eight sessions,” Monroe said.

The space between each session allowed time for the music to marinate in their minds, for “being able to hear what you did, being able to listen to what you’ve done for the past two weeks while you’re on the road, if you want to change anything or write lyrics,” Monroe said.

The stretching out of each recording step alternatively led to a lot of analysis as well, dissecting each new addition, sometimes to a fault.

“You tend to over-think things, you have so much time in between,” Monroe said.

In between jaunting around countless open-armed venues, the Horses would gather in the studio, each presenting their own separate material, which made for a plethora of possibilities to tinker with. With the ultimate goal of building one smooth, set sound, roping that many individual styles into one set album was somewhat of a tricky maneuver. The result became an amalgam of sounds, complementing one another, bleeding into a cohesive effort to represent Band of Horses as a genuine whole. Will it be equal-parts collaboration from here on out? Nothing has been entirely set in stone.

“We’re still a really young band,” Monroe said. “It might be you’ll have a couple songs written by a couple people in the band in the future, maybe no more.”

While a large amount of signature Band of Horses sound still obviously remains, Infinite Arms shows that two years have passed and resonance has evolved and expanded through the addition of new sets of hands. Songs like “Compliments” and “Laredo” have strong, percussive pulses, less driving and more rhythmic than previous works. The contribution of multiple minds is apparent with more swell in the songs; not just because of the addition of occasional strings or those defining soaring harmonies the Horses have so fluently honed, but the latency of equal effort, proved by each song’s character. Nothing sounds formulaic about the album and each track has its own presence, like a bright quilt, in some ways “projecting what the future sound of this band is going to be like,” Monroe said.

Lyrically, Bridwell manages to keep that thin wall between the listener’s interpretation and his own defined meaning, whether that’s an intentional move or a writing style is yet to be concluded, but it allows a little leeway for the audience to make their own interpretations.

“The listener can choose their adventures if everything’s not so literal,” Monroe said. “Keep a little mystery, everything is so not mysterious these days, trying to hang on to a bit of that,” Monroe said.

The mystery is how these men continue to keep their cool. How they can come this far–from childhood to present, from actual years of effort toward recording the anticipated Infinite Arms, from miles of touring to earn the bread to make the record from their own pocket–and stay levelheaded. In the same breath as explaining the evening’s plans of sharing the stage with Northwest grunge idols Pearl Jam, Monroe simply followed with, “…and coconut water is the best drink ever.” 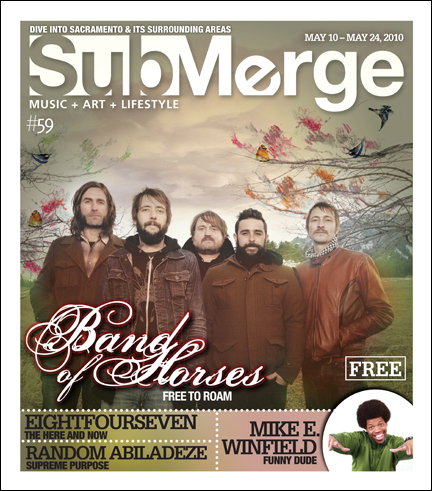 See Band of Horses (sans Pearl Jam) live at Freeborn Hall on the campus of UC Davis on Thursday, May 27. Infinte Arms will be released May 18.